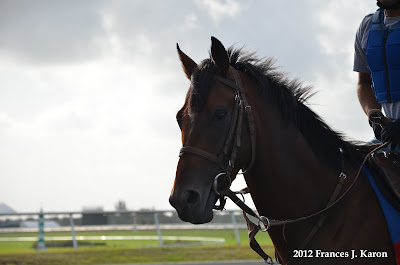 My previous post included a photo of Went the Day Well, a three-year-old colt coming off a score in a maiden special weight and who was about to ship from Palm Meadows Training Center in Florida to Kentucky ahead of his stakes debut, in yesterday’s 9-furlong, Grade 3 Vinery Racing Spiral Stakes at Turfway Park. That shot showed him getting re-shod in preparation for the upcoming race.
The New York-bred son of Proud Citizen and the Tiznow mare Tiz Maie’s Day won the Spiral by a drawing-away three-and-a-half lengths to give trainer Graham Motion and Team Valor (in partnership with Mark Ford, in Went the Day Well’s case) back-to-back wins in the Spiral on the heels of Animal Kingdom. Like Animal Kingdom, Went the Day Well was winning only his second race, and first stakes race, in the Spiral. Last year’s Spiral winner, of course, went on to win the Kentucky Derby under John Velazquez, who rode Went the Day Well yesterday, and Motion, Team Valor, and Velazquez (if he stays on Went the Day Well for the Derby) are hoping their newest good thing will emulate last year’s Spiral winner by also winning the Derby. 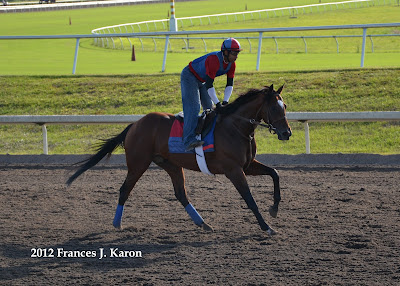 Went the Day Well was sold from the estate of Austin Delaney (although he was officially bred by James Patrick Delaney) through Hurstland Farm, agent, as a foal from the Keeneland November sale for $15,000 (the second-cheapest of nine Proud Citizen weanlings sold in 2009), bought by Irish-based Grove Stud. He’s the first, and so far the only, foal out of his unraced dam, a half-sister to a minor stakes winner, Jah (by Relaunch, grandsire of her sire Tiznow), and to the dams of three European stakes winners. Grove pinhooked him at the Tattersalls October yearling sale, selling him for 26,000 guineas (approximately $43,000), with bloodstock agent Oliver St. Lawrence securing him on behalf of The LAM Partnership.
The bay raced twice as a two-year-old, finishing second over about a mile on turf both times for trainer Ed McMahon -- not of Johnny Carson and Publisher’s Clearing House fame -- before Team Valor purchased him privately and re-imported him to the U.S. He debuted in this country on February 4th, finishing 4th in a maiden special weight at Gulfstream before winning a similar race on March 3rd. Victory in the Spiral improved Went the Day Well’s record to 5-2-2-0 with total converted earnings of $314,344. 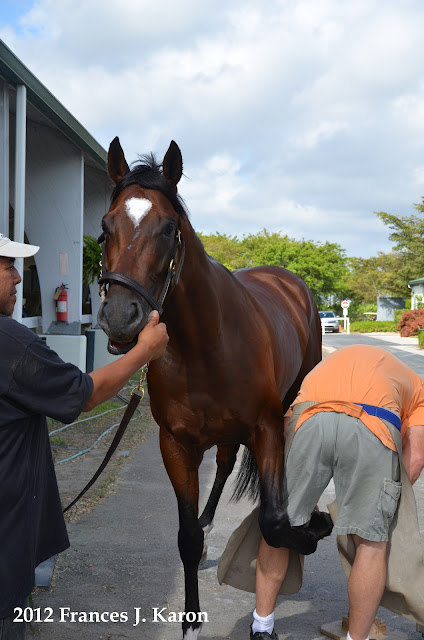 Went the Day Well is his sire’s tenth Graded stakes winner, including four in Chile where Proud Citizen does double duty when he’s not breeding mares from Airdrie Stud in Kentucky during the Northern Hemisphere season. His champions are his only two Grade 1 winners, the fillies Proud Spell and Vamo a Galupiar (in Chile). Back in his racing days, Proud Citizen won just one stakes race -- the Grade 2 Coolmore Lexington Stakes -- and indeed only three-of-16 lifetime starts, but he placed second and third, respectively, in War Emblem’s Kentucky Derby and Preakness. The average winning distance for his progeny is 6.80 furlongs.
After producing dead foals in 2010 and 2011, Tiz Maie’s Day was bred to Discreetly Mine for 2012. Her dam Sweet Roberta was a Grade 2 winner who placed second to ill-fated champion Go for Wand in the Breeders’ Cup Juvenile Fillies in 1989. The next dam Candy Bowl was a half-sister to, among others, Grade 1 winner Cure the Blues, which means that Went the Day Well’s fifth dam Speedwell is a half-sister to Secretariat, by that horse’s sire Bold Ruler. Because sire Proud Citizen is by Gone West, whose dam is by Secretariat, Went the Day Well has 4x5 linebreeding to the half-siblings Secretariat and Speedwell.
If there are any distance questions from the top half of Went the Day Well’s lineage, there are none for the bottom half, as his broodmare sire Tiznow was a 10-furlong specialist and Roberto, sire of second dam Sweet Roberta, was an Epsom Derby and Coronation Cup winner, both over about 12 furlongs.
Oliver St. Lawrence tweeted that the colt’s name is from this World War I epitaph penned by John Maxwell Edmonds printed in The Times in 1918, and it was often used thereafter for WWI and WWII epitaphs:
“On Some who died early in the Day of Battle”
Went the day well? We died and never knew;
But well or ill, England, we died for you. 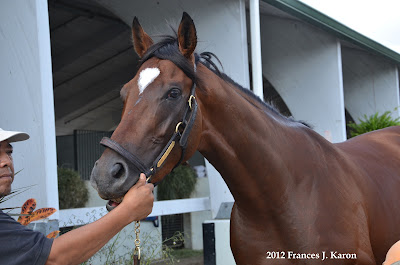