Oaks contenders on the track at Churchill

As promised, here are photos of some of the Oaks fillies from Saturday at Churchill Downs. 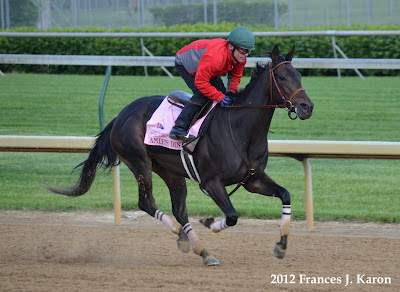 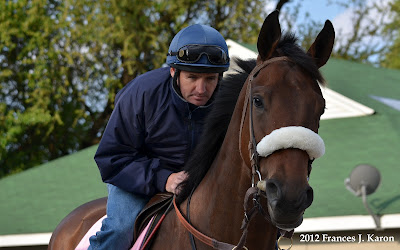 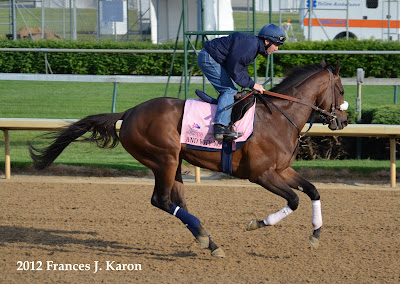 Email ThisBlogThis!Share to TwitterShare to FacebookShare to Pinterest
Labels: Amie's Dini, And Why Not, Believe You Can, Churchill Downs, Colonial Empress, Eden's Moon, Kentucky Oaks

Derby contenders on the track at Churchill


With the Kentucky Derby a week away from today, it was a good morning to visit Churchill Downs and take pictures of the Derby and Oaks horses. Some of the horses went out before the designated Derby/Oaks contender time of 8:30-8:45, and others haven’t shipped in yet. Here are photos of nine of the colts, and tomorrow I’ll post pictures of the Oaks fillies. 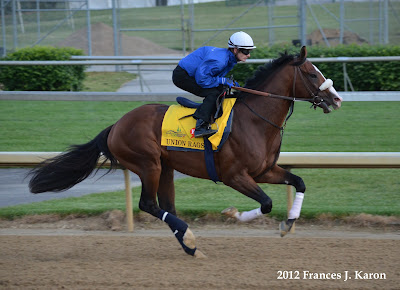 Lisa Danielle gave no indication during her racing career that she was a star broodmare in the making. Cecil Seaman, as agent for Morton Fink, bought the daughter of Wolf Power and the Secretariat mare Askmysecretary from Walmac Int’l, agent, for $29,000 at the 1995 Keeneland September yearling sale. Sent to the barn of trainer Louis Goldfine, the chestnut was unraced at two and started six times at three, recording a third-place finish in a maiden special weight over a mile and a sixteenth at Gulfstream Park and winning the same type of race over a mile at Arlington Park, with four off-the-board finishes.

After having made six starts in the span of less than six months, Lisa Danielle was off the radar for eleven months. When she reemerged in June of 1998, she was about three-and-a-half months in foal to Roy and ran seventh at Churchill Downs for new trainer Steve Morguelan. She never raced again.

With one win and $20,120 in earnings, she did not have much of a resume for breeding great success at the time she was first covered. Nor did Lisa Danielle’s pedigree hold much promise -- her unraced dam had produced just one stakes horse, Carsona (by Carson City), who did, at least, place third in the Grade 1 Hollywood Oaks, in which she actually ran fourth of five, beaten nearly 23 lengths, but the fifth-place horse did not finish and the second-place filly was demoted to last. Lisa Danielle’s next dam Laquiola (by Lyphard) had also produced one stakes-placed runner, Saquiace (by Sagace), of Listed quality in France.

Despite being by unfashionable sires, Lisa Danielle’s first foals started her off well and proved her to be capable of consistently throwing hardy, talented runners: Lisa’s Royal Guy (1999 gelding by Roy) won seven races and $182,000 in 61 starts. Our Royal Dancer (2000 filly by Roy) won the West Long Branch Stakes at Monmouth Park, one of her five wins in 19 starts, and amassed $195,000. Aweemaway (2001 filly by Skip Away) was unplaced, followed by Boss Zach (2003 gelding by Mutakddim), a five-time winner of nearly $170,000. Honor Patti (2004 filly by Honour and Glory) is Lisa Danielle’s only unraced offspring. Courting Elaine (2005 filly by Doneraile Court) won five races and $103,000.

Then Lisa Danielle foaled a pair of Grade 1 horses: Successful Dan (2006 gelding by Successful Appeal) and Wise Dan (2007 gelding by Wiseman’s Ferry). Successful Dan crossed the wire first by a nose in the Clark Handicap-G1 at Churchill Downs on November 26, 2010, but was disqualified and placed third by the stewards. He has won his only start since, an April 6, 2012, allowance at Keeneland, for Fink and Charlie LoPresti and if he stays sound, could be a force to be reckoned with this year. He is credited with two Graded stakes scores, the Grade 2 Fayette Stakes at Keeneland and the Grade 3 Northern Dancer Stakes at Churchill. The six-year-old has raced just nine times, with six victories, a second, and a third.

Also trained for Fink by LoPresti, Wise Dan has already surpassed his older brother: in 15 starts, his nine wins include six stakes, five of them Graded. His biggest success to date came in the nine-furlong, Grade 1 Clark Handicap last November -- if not for Successful Dan’s disqualification, Lisa Danielle would be the dam of back-to-back Clark winners.

Wise Dan made his five-year-old season debut in the Grade 3 Ben Ali Stakes on April 22 at Keeneland. Sent off the heavy favorite despite not having raced in five months -- LoPresti is known for his ability to have horses ready to run off a layoff -- the gelding ran an electrifying nine furlongs, dragging his jockey Johnny Velazquez to the front and drawing off powerfully to win in hand by 10 1/2 lengths in 1:46.63, breaking the track record of 1:46.77 while barely taking a deep breath. He became a millionaire, rewarding Morton Fink many times over on his $8,500 stud fee for Wiseman’s Ferry and initial $29,000 investment in Lisa Danielle.

There may well be more success to follow: Casino Dan, Lisa Danielle’s 2008 Mutakddim gelding, broke his maiden for Fink/Lopresti at Turfway Park in February. The 18-year-old mare has a 2010 filly by War Chant, named Enchanting Lisa, and was bred to Afleet Alex for the 2012 foaling season.

Though undistinguished on the racetrack, Lisa Danielle is far and away the best producing progeny of South African Horse of the Year Wolf Power, a paternal grandson of Round Table who excelled over a mile and spent his stud career at Gainesway Farm in Lexington, Kentucky. Fink’s mare is responsible for foaling two of her sire’s seven Graded winners and one of two Grade 1 winners, the other being two-time Santa Anita Handicap winner Milwaukee Brew. Milwaukee Brew’s dam Ask Anita was one of Wolf Power’s seven Pattern winners, having won the 11 furlong Yerba Buena Handicap-G3 on the turf. Wolf Power’s best daughter Freedom Cry-G1 (bred by Murray West) never had a chance to reproduce herself, as she fractured a leg as a 5-year-old and was euthanized.

Sights from the Spring Meet at Keeneland 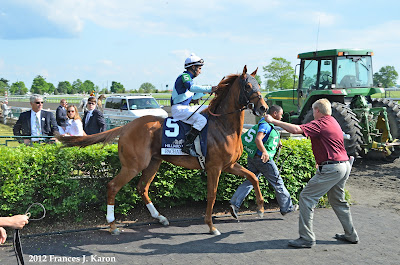 Chadds Ford Stable’s Union Rags breezed a half-mile in :47 2/5 at Keeneland today, galloping out 5/8s in a minute. Under regular morning rider Peter Brette, the Michael Matz colt looked good over the Polytrack in what is expected to be his penultimate pre-Kentucky Derby breeze. 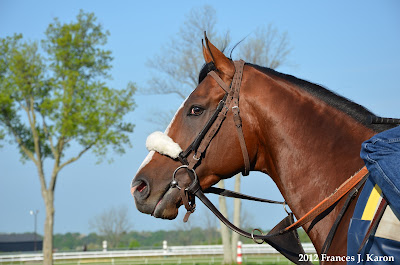 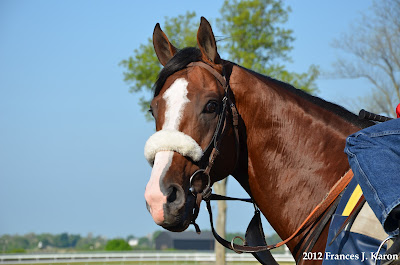 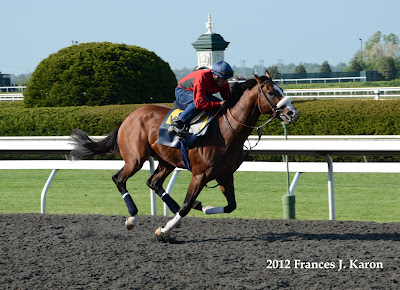 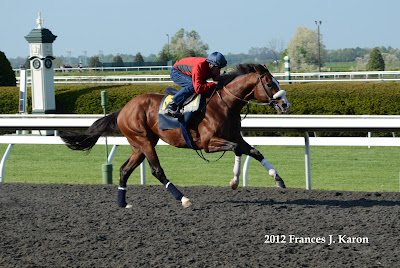 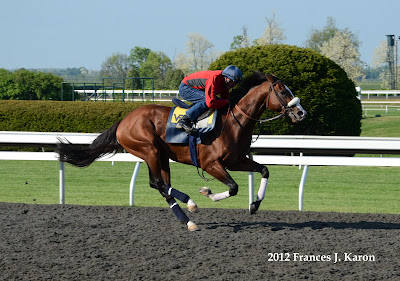 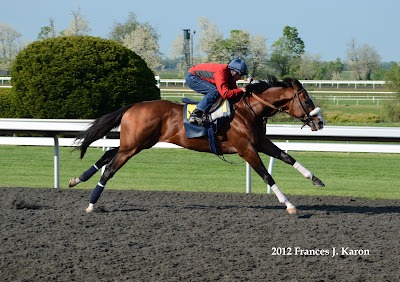 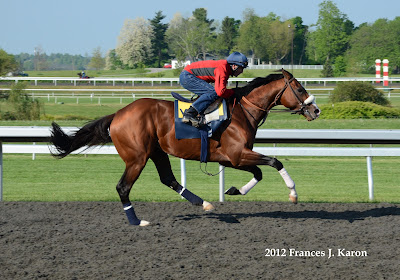 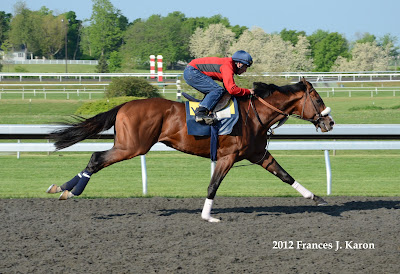