Much has been written on the life and times of A.P. Indy, but a recent visit to the retired 27-year-old stallion at Lane's End -- where he was born and raised, stood his entire stud career, and will live out his days -- got me thinking about his legacy as it stands today.

The breakdown of those 155 stakes winners is: 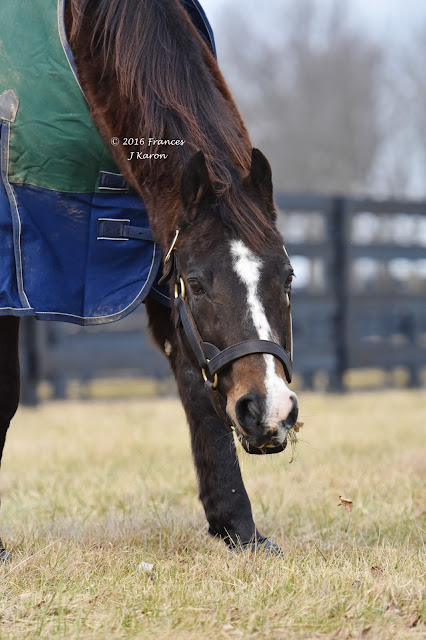 It is said that the measure of a truly great sire extends beyond the short term, that he must establish a strong male line. We know from A.P. Indy and 21 other Grade/Group 1-siring sons that Seattle Slew did that, but let's look at what A.P. Indy has accomplished, so far, in his lifetime. These figures are current through February 10, 2016, and reflect internationally recognized Grade/Group races:

~2 black-type stakes winners, neither of them Graded/Group, sired by 1 great-grandson (Concord Point, a Grade 3 winner and the first son of Tapit to stand at stud).

A.P. Indy's development as a great-great-grandsire is still in its infancy. In addition to major sons of Tapit who have yet to have runners, Horse of the Year California Chrome (by Lucky Pulpit, by Pulpit, by A.P. Indy) will be well supported when he retires to Taylor Made Farm in 2017.

These results are pretty impressive already, and consider this: Seattle Slew left 22 sons who sired Grade/Group 1 winners. A.P. Indy is already up to 27 sons (accounting for the bulk of Seattle Slew's 34 G1-siring grandsons), and that number is likely to increase: stakes winners Astrology (at Taylor Made Farm, $6,500 fee) and Canadian champion Eye of the Leopard (Calumet Farm, $7,500) have first two-year-olds in 2016; Take Charge Indy (WinStar Farm, $17,500) has yearlings; and Commissioner (WinStar, $7,500) and Honor Code (Lane's End, $40,000) -- 2015 champion older male in the U.S. and the last Grade 1 winner to represent A.P. Indy on the racetrack -- will have foals next year. Any of these could make big waves, as could second-generation A.P. Indy-line horses such as sons of Bernardini and Malibu Moon (sire of Kentucky Derby winner Orb, at Claiborne Farm, $25,000). We are also get to look forward to foals by the first Grade 1-winning sons of Tapit at stud: champion Hansen (who stood one season in the U.S. before exportation to the Republic of Korea) and Tapizar, with two-year-olds this year.
Posted by Frances J. Karon at 4:20 PM No comments: