Animal Kingdom: Before he was a Derby winner

Having done a cover profile on Graham Motion for North American Trainer and a Q&A interview with Team Valor’s Barry Irwin for the May issue of Thoroughbred Owner & Breeder, I’d be lying if I didn’t say I had a special rooting interest in Animal Kingdom to win the Kentucky Derby.
I got a good look at the colt in his stall hours before he won the Grade 3 Spiral Stakes at Turfway on March 26, and was impressed by what a gorgeous, physically imposing horse he is. My camera’s memory card chose that day to quit working, so I had to rely on my camera phone for my pictures.


Graham kept Animal Kingdom at my home track, Keeneland (photos below), for most of the six weeks between the Spiral and the Derby, so I was able to see him train some mornings. In retrospect, it was nice to have him all to myself; that will certainly never happen again...!

My very amateur footage of the Kentucky Derby -- before, during, and after -- in two parts:
Posted by Frances J. Karon at 6:33 PM 3 comments:

Derby and Oaks horses at Churchill on Wednesday morning

Here is some of my apologetically amateur footage of the Derby and Oaks crew on parade at Churchill this morning; contrary to his subtitle, Soldat IS in the Derby:

I was on the phone with a friend from my Walmac days and as we were talking I pointed out that today would have been Nureyev’s birthday. “I know,” she said, having been thinking about him too, and it really kind of hit home how much I miss obsessing over his sons and daughters on the racecourse.
At a time when Danzig and Sadler’s Wells are firmly establishing themselves as the prevalent names in international pedigrees, it has made me sad to see the sub-fertile Nureyev’s line dying out, and to realize that the younger generation of racing folk are probably not familiar with his amazing story.
I found a few links on Wikipedia leading to Blood-Horse articles that were published after Nureyev’s death on October 29, 2001, and I’m re-posting two of them here. If you love horses and don’t know what Nureyev went through, I highly recommend “A Look Back.” The fact that this horse not only survived but lived comfortably and physically flourished for 14 years after his accident is a testament to the people who cared for him.

“Remembering Nureyev” is his obituary. 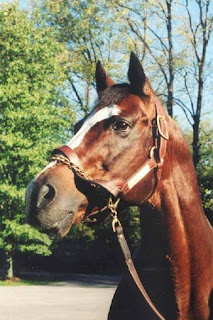