A very quick post with photos from this afternoon of Barbara Hunter’s unraced homebred broodmare Motokiks (Storm Cat -- Matoki, by Hail to Reason) and her best daughters -- the newly retired Graded stakes winners Keertana and Snow Top Mountain (who earned black type while racing in foal this year), and another daughter, the winning mare Whitefish. 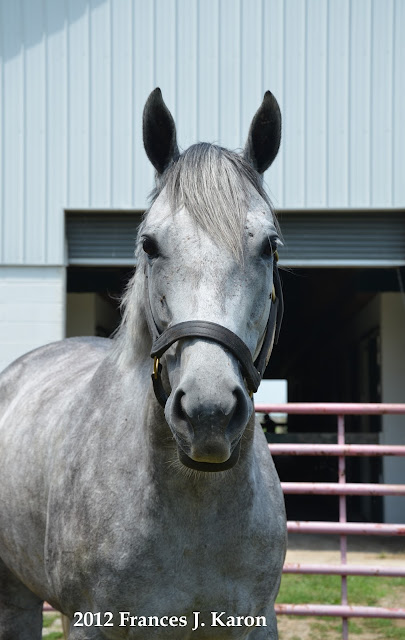 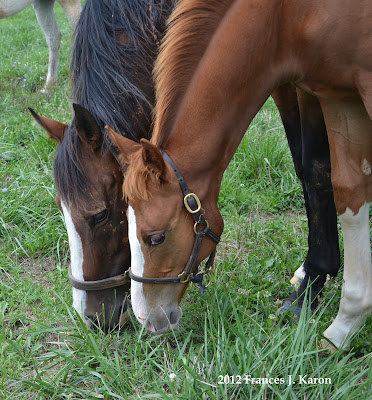 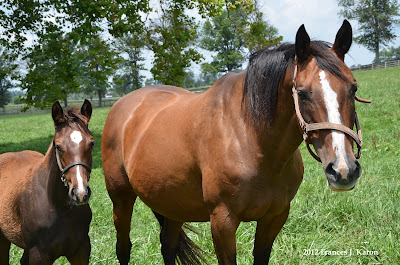 I was treated by Jen Roytz, marketing and communications director at Three Chimneys, to a pasture visit with the retired broodmares at the Midway, Kentucky, farm yesterday. There are some prominent broodmares pensioned there -- including 31-year-old Albertine -- who are more than worthy of a blog post...however, as someone who is obsessed with Nureyev, my primary interest was in meeting the stallion’s 27-year-old daughter Action Francaise and 26-year-old daughter Louveterie, so for today, I will concentrate on these old gals.

(Incidentally, I met Louveterie many years ago when I was at Three Chimneys to see Kentucky Derby winner Genuine Risk and was inexplicably drawn to a random chestnut mare poking her head over the fence. I’m not too embarrassed to admit that I threw my arms around Louveterie’s neck after I read her nameplate, and that I was more excited to meet her than I was Genuine Risk.)

I was happy -- more than happy -- to observe that Action Francaise (or “Frenchie,” as she is known around the farm) and Louveterie (a.k.a. “Lulu”) are best buds. Frenchie efficiently and rather impolitely, to my amusement, chased away every mare who got near her who wasn’t Lulu. Both Nureyev mares are kind and curious, and appreciative of scratches (and carrots). Action Francaise resembles her sire quite a bit, especially around her head and eye, so I was immediately in love.

But Action Francaise is more than just Nureyev’s daughter. She’s also the only stakes winner produced from 1974 Prix de l’Arc de Triomphe winner Allez France, a daughter of Arc winner *Sea-Bird out of Priceless Gem, who was a great-granddaughter of La Troienne, one of the most influential broodmares in racing history.

French Art dealer Daniel Wildenstein purchased Allez France as a youngster and named her thus, if memory serves, to get a kick out of hearing announcers call her name, which translates to “Go France.” She was a Group 1 winner and champion in France each season she raced -- from two to five -- earning a Horse of the Year title at four. In addition to the Arc, she won seven Group 1s, two of which -- the Poule d’Essai des Pouliches and the Prix de Diane (over subsequent English Horse of the Year, and eventual U.S. champion, Dahlia) -- were classics, and she placed second to Rheingold in the 1973 Arc.

Brought to the U.S. in 1975 and retired after one unsuccessful start, Allez France presumably experienced fertility woes, because she had just four foals, in 1980, 1984, 1985, and 1988. If that’s the case, then it’s almost a miracle that she was able to get in foal to Nureyev, a sub-fertile stallion.

Although by far the most accomplished of her dam’s offspring -- only one of the other four was a winner -- Action Francaise did not prove to have anything near the racecourse ability of her dam. In five starts (four in France, one in England) at two and three, she won twice, including the Group 3 Prix de Sandringham -- her only black-type -- and placed once.

She did, however, surpass Allez France as a broodmare.

Action Francaise is the dam of 15 foals, nine of them winners including five at stakes level:

Airline’s Sadler’s Wells daughter Argentina (Ire) never won more than a Listed race, but placed second or third in five G1s, including a second in the Prix de Diane and a second and a third in the Diana Stakes in the U.S. Astorg’s Asti (also by Sadler’s Wells) has a similar story, with one Listed stakes win at Belmont and multiple Graded/Group placings, including a second in the Prix Saint-Alary-G1. Two other daughters of Action Francaise -- Aventuriere (by Alysheba) and Astina (Slew o’ Gold) -- are dams of stakes winners in India.

Article Rare, the final foal from Action Francaise, is at the start of her breeding career and carries high hopes to contribute further black-type to this family. Her first foal -- a son of Dalakhani -- is a yearling, and she has a 2012 colt by Oasis Dream.

Action Francaise’s classic-placed pasture-mate and fellow Nureyev daughter Louveterie (bred and owned by the Wildenstein family, too) was also lightly raced, making only four starts at two and three, with two wins and two seconds. At three in 1989, she won the Prix Vanteaux-G3 and placed in the Prix de Diane-G1 (a race that her granddam had won) and Prix Saint-Alary-G1.

Whereas Allez France had a ready-made pedigree, *Lupe II -- Louveterie’s dam -- was more obscurely bred, by Primera (a dual Princess of Wales’s Stakes winner who was second in the St. Leger) out of the Alycidon mare Alcoa. Primera sired 16 stakes winners, the best of which was champion Lupe, who won the Oaks, Coronation Cup-G1, Yorkshire Oaks, Cheshire Oaks, and Princess of Wales Stakes-G3 in 1970.

As Action Francaise was the one to enhance Allez France’s line, so Louveterie did for Lupe. From 11 foals, Louveterie is represented by five stakes horses:

Daughter Louve is the dam of Loup Breton, a Grade 2 winner in the U.S. and a Group 2 winner in France who is Group 1 placed in both countries, by Anabaa; and Louve Royale, a Listed winner who was multiple Grade 3 placed, by Peintre Celebre (an Arc-winning son of Nureyev for the Wildensteins). Another daughter, Louve Sacree (by Seeking the Gold), produced French stakes winner Lungwa, by One Cool Cat.

Loup Solitaire has sired 11 stakes winners, including Gentoo, who has two French Group 1 wins to his credit. Loup Sauvage has three stakes winners, two Group 3. One of these, Love and Bubbles, is the dam of 2012 Tokyo Yushun-G1 (Japanese Derby) winner Deep Brillante.

Many thanks to Jen and Three Chimneys for a memorable afternoon.

Grace At the Top

When Grace Hall won the Grade 2 Delaware Oaks at Delaware Park on July 14th, she became a millionaire (with $1,140,000 in earnings, to be precise) -- something her illustrious third dam, Life At the Top, fell less than $11,000 from accomplishing herself.

Bred by Eaton Farms Inc., Red Bull Stable, and Seminole Syndicate, Life At the Top was sold to D. Wayne Lukas for $800,000 at the 1984 Keeneland July select yearling sale. Her hammer price was the median marker for sire Seattle Slew’s 17 yearlings to sell that year. Though judged just an average Seattle Slew by the marketplace, she turned out to be the only Grade 1 winner in his fourth crop of foals.

Not to be confused with the Group 3-winning British-bred Life At the Top (a foal of 1986, by Habitat) or Listed-winning New Zealand-bred Life At the Top (foal of 1984, by Prince Echo), Life At the Top was produced from the Riva Ridge mare See You At the Top, a winning half-sister to Kentucky Derby and Belmont Stakes winner Bold Forbes. The bay filly was raced by L.R. French and Barry Beal, who had co-owned Seattle Slew’s first crop champion Landaluce. Life At the Top finished second at Hollywood Park in July of her two-year-old season prior to winning a maiden special weight and placing second in the Sorrento Stakes, both in August at Del Mar.

She was away for the remainder of her juvenile year but came back to race 18 times as a sophomore in 1986, when she compiled a record of six wins, five seconds, and four thirds -- and this while racing from January 5th through November 29th. Life At the Top won the Mother Goose Stakes-G1, Ladies Handicap-G1, Long Look Handicap-G2, Las Virgenes Stakes-G3, and Rare Perfume Stakes-G3, placed second in the Kentucky Oaks-G1, Coaching Club American Oaks-G1, Gazelle Handicap-G1, Cotillion Handicap-G3, and Pasadena Stake, and third in the Alabama Stakes, Acorn Stakes, Spinster Stakes -- all three Grade 1 races -- and the Grade 3 Santa Ynez Stakes. Fourth also in the Monmouth Oaks-G1 and Fair Grounds Oaks-G3, she was a finalist for the three-year-old filly Eclipse Award but lost out to six-for-six Tiffany Lass (Melair was second in the voting; Life At the Top was co-third with Classy Cathy). Tiffany Lass had defeated the pacesetting Life At the Top by a head, with champion two-year-old filly Family Style a neck behind in third, in a four-horse photo in the Kentucky Oaks. Ironically, Tiffany Lass was the best foal sired by Life At the Top’s relative Bold Forbes.

Returning at four, Life At the Top made six starts, winning the Rampart Handicap-G3 and the Shirley Jones Handicap, and was retired after a seventh-place run in Grade 1 Top Flight Handicap on April 26, 1987. She earned $989,504, with a career record of 27-9-6-5; she was worse than fourth only three times and won stakes from seven to ten furlongs.

Put through Fasig-Tipton’s 1987 Night of the Stars sale as a broodmare prospect, she was signed over to Lee Eaton, agent, and a year later Joe Allbritton’s Lazy Lane Farms paid $1.9 million for her in foal to Mr. Prospector at the Keeneland November sale.

Life At the Top produced eight foals, all fillies, before her death at Lazy Lane in Virginia in 2002:

But Grace Hall’s granddam Dream Season didn’t fare too poorly in the breeding shed herself. From three foals to race, she had three stakes horses: Listed winner Season’s Greetings (Ire) and the stakes-placed duo of Legend of Spring (GB) and Deep Space.

Grace Hall, by Empire Maker and bred by Darley, is the fifth foal of Season’s Greetings (by Ezzoud). Trainer Tony Dutrow bought her for $95,000 as a Keeneland September yearling, a price well below Empire Maker’s 2010 yearling average of $182,000 and median of $140,000. But like her great-granddam, she’s proven to be one of the best of her sire’s crop -- Bodemeister is, so far, Empire Maker’s only other Grade 1 winner foaled in 2009.

To date, Grace Hall has made eight starts -- in contrast to Life At the Top, who had started 12 times by July 6th of her three-year-old season -- with five wins, two seconds, and a third, counting the Spinaway Stakes-G1, Gulfstream Oaks-G2, Delaware Oaks-G2, and Blue Hen Stakes among her wins for owners Michael Dubb, Bethlehem Stable, and The Elkstone Group. She lost out on the two-year-old championship to My Miss Aurelia, who handed her her only juvenile defeat, in the Breeders’ Cup Juvenile Fillies Stakes-G1. In addition to her two wins in 2012, Grace Hall was second in the Grade 2 Davona Dale Stakes and third -- one place farther back then her third dam -- in the Kentucky Oaks-G1. Along with Oaks winner Believe You Can, she is currently at the top of the three-year-old filly division.

Grace Hall is inbred 3x4 to the full siblings El Gran Senor (broodmare sire of Empire Maker) and Try My Best (sire of Ezzoud), European champion sons of Northern Dancer and Sex Appeal, a pattern (at 4x2 to Try My Best on top and El Gran Senor on the bottom) that also yielded Ramonti, winner of Group 1 races in England, Hong Kong, and Italy. Chinchon (Ire), a G1 winner in the U.S. and Hong Kong, is bred on a similar angle, 3x3 to Try My Best and Northern Prancer (a full sister to El Gran Senor/Try My Best).

Posted by Frances J. Karon at 5:23 PM No comments: