Boys at Tosconova at Churchill

Trainer Bob Hess Jr. clearly knew he had something special in his two-year-old Boys at Tosconova to debut him in front of a record Kentucky Oaks-day crowd in the Grade 3 Kentucky Juvenile Stakes at Churchill Downs. But watching the longshot’s considerably rattled nerves – not surprising for an unraced horse who was seeing and hearing 116,000+ people all at once – in the warm-up, I could only think that jockey Kent Desormeaux had a few unkind thoughts towards his agent for getting him that mount.  I took this photo before the race:

Sadly for Hess, who purchased the son of Officer for $35,000 as a yearling, and Desormeaux, after the second-place effort here a 75% interest in the colt was sold to Jay Em Ess, for whom he broke his maiden at Belmont by 12 lengths and won the Hopeful S.-G1 at Saratoga today for trainer/jockey team Rick Dutrow Jr. and Ramon Dominguez.
Posted by Frances J. Karon at 7:10 PM 4 comments:

Blame on a crisp autumn morning

Here’s Blame (’06 colt by Arch o/o Liable, by Seeking the Gold), who is 3-for-3 in 2010 including victories in the Whitney H.-G1 over Quality Road and the Stephen Foster H.-G1 over Battle Plan in his last two starts, out for a routine gallop this morning. I was on the wrong side of the track looking into the sun so didn’t post anything of him stretching his legs. 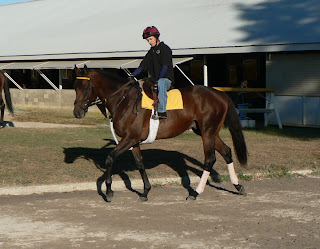 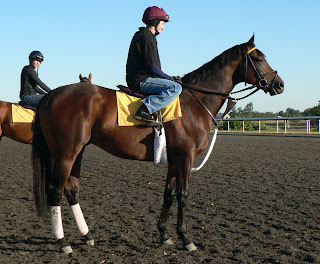 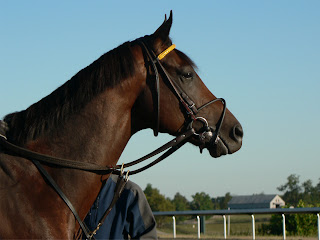 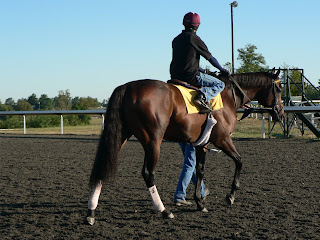 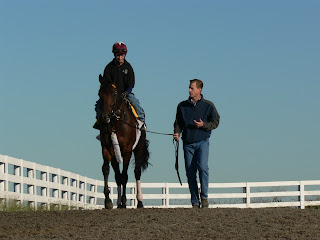 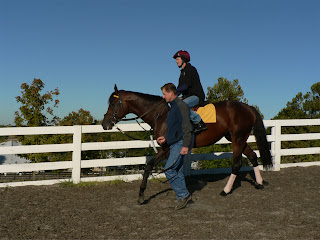 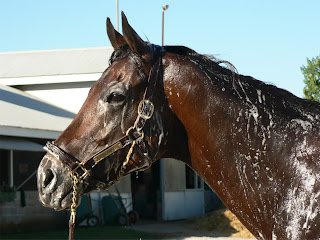 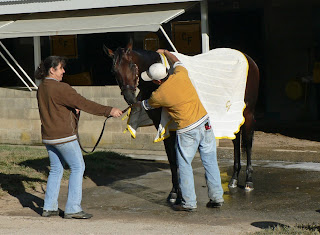 The Mien of a Queen

The fairytale story of Lisa’s Booby Trap hit a small bump when the previously undefeated filly finished last in the second division of the Riskaverse Stakes at Saratoga yesterday for owner-trainer Tim Snyder. (Glenn Craven has a nice entry about a personal meeting with Tim and Lisa here at his blog “Fugue for Tinhorns.”) But what’s a fairytale without an evil queen or ugly stepsister?
Cue Queen of the Creek.
While the sentimentalists were pulling for Lisa’s Booby Trap, Queen of the Creek – I'll refrain from branding her “evil” – skipped over the lawn under Julien Leparoux and won the Riskaverse easily. The daughter of Irish-bred turf champion Theatrical and Miasma (by Lear Fan) enhanced her already significant value with this, her first stakes win.
Queen of the Creek was a valuable broodmare prospect before she set foot on a racetrack. Her three-parts sister – which is as close as we’ll get to a stepsister in this tale – Mien (by Nureyev, the sire of Theatrical) was an undistinguished racehorse, winning one of two starts, but quickly made a name for herself at stud. Her second foal Big Brown won the 2008 Kentucky Derby, Preakness, Haskell Invitational, and Florida Derby en route to the three-year-old division championship the year Queen of the Creek was sold to Nathan Tinkler’s Patinack Farm for $140,000 at the Keeneland September yearling sale.
For your amusement, here’s the only photo I got of Queen of the Creek’s nephew Big Brown and Kent Desormeaux (rider of Lisa’s Booby Trap) as they won the Derby. My timing was legendary for all the wrong reasons:
Queen of the Creek is linebred 5x5 (and Mien 4x5) to the blue hen mare *Rough Shod II, through the full siblings Thong and Lt. Stevens. A profile on Rough Shod and a salute to the many graded and group stakes winners who have multiple strains of her blood is a topic for another post. For the moment, suffice it to say that any time you see Lear Fan or Alysheba (whose dams are full sisters by Rough Shod’s son Lt. Stevens) crossed with Nureyev or his close relatives Sadler’s Wells and Fairy King (full brothers), that horse is linebred to Rough Shod. Some examples through Alysheba or Lear Fan are classic winner Bright Moon, Hong Kong Vase-G1 winner Vallee Enchantee, French highweight Loup Solitaire, and, of course, Queen of the Creek.
Similarly, the potent Kingmambo/Sadler’s Wells cross that has produced Japanese Horse of the Year El Condor Pasa and European classic winners Henrythenavigator, Divine Proportions, Virginia Waters, and Workforce is based on the same principle of a duplication of the Rough Shod family, because Kingmambo’s dam, multiple champion Miesque, is by Nureyev.
I suspect we’ll see a continuation of this pattern when Blame goes to stud: his third dam Special is the dam of Nureyev and second dam of Sadler’s Wells.
[The name of this blog – you guessed it! – is based on this family. As Nureyev’s No. 1 fan, I wanted to honor his female family when I named my business a few years ago. His first three dams were Special; Thong; and Rough Shod. The name Special was apt for the horse but too presumptuous for me, and while the humor of going with Thong was tempting, I was wary about the kind of clients it would attract – although it would certainly have been, er, interesting to hand out “Thong” business cards or to make breeding recommendations on “Thong LLC” letterhead. So, Rough Shod it was!]