One Man’s Trash; Or, The Kindness of Strangers; Or, When it’s Time to Check Yourself in to the Loony Bin* 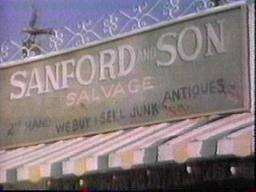 I collect things. Weird things, by most standards. Among my favorite possessions are worn halters, used horseshoes, and mane and/or tail hair from favorite racehorses. These items are not necessarily easy to come by, so I will often seize any opportunity to get a memento. When Harmonious lost a baby tooth in October, I diverted it from being thrown away and kept it. When at Oaklawn I saw the great mare Zenyatta shake her head vigorously and a wad of cotton fly out of one ear, I picked it up. Let’s face it: chances are slim I will ever be able to get a more mainstream keepsake like a halter or shoe of Zenyatta’s, so the cotton ball was like a treasure.
And then it occurred to me before Zenyatta’s start, her final race, in this year’s Breeders’ Cup Classic at Churchill Downs that the rundown bandages a horse wears in a race are typically thrown away. I asked my friend, John Shirreffs’ stable foreman Francisco, if he would try to keep Zenyatta’s hind leg wraps for me. After all, if they were going to end up in the trash…
In the aftermath of Zenyatta’s second-place finish in the race on Saturday evening, remembering to take the bandages home with me was the last thing on my mind. By early Sunday afternoon, when I realized what I had done, I was at Keeneland with no hope of being able to drive to Churchill to pick up the bandages prior to Zenyatta and her groom Mario, Harmonious, and Francisco boarding their flight to California.
Like any insane person paranoid about losing a piece of, let’s face it, junk with dirt ground into it, I panicked briefly until my friend Sarah connected me with Alice, who had vanned over to Churchill with a horse on Sunday. I can only imagine how crazy I, a complete stranger, must have sounded when asking if she would get the rundowns for me. But she got them anyway and took the wraps back to her stable barn at the farm in Versailles. I was tied down at the sales for the next two weeks, but I knew that my beloved Zenyatta’s bandages were safe and waiting for me to get them.
Yesterday, the first weekday after the sale was finished, I sent Alice a text message that I would be coming by to get the bandages. But I had to much to do after a month of overexerting myself -- for instance, the milk in my refrigerator was dated October 7th -- and I only wish I were kidding -- and then I felt uncomfortable showing up at the training barn unannounced, so I decided to wait one more day and e-mail someone I know in the office to say I would be there today.
I was up early and eager to pick up the wraps, but I made myself wait, not wanting to show up during the busiest hours of their workday. Mid-morning, on my way out the door, I grabbed a gallon-sized freezer bag and wrote “Zenyatta – hind bandages from 2010 BC Classic” on the label. As I scrambled to get the dog and myself into the car, I missed a call from Alice on my cell phone.
With dread, I listened to Alice’s voicemail saying that between yesterday and today, the bandages had ended up in the dumpster and couldn’t be found. I sat in the car, still in the driveway, clutching on to my baggy for dear life, running the gamut of emotions, not moving for 25 minutes. I was crushed.
I knew that I had to call Alice; I felt equally bad for both of us. I could tell from her message that she felt horrible, and I needed to tell her that it was alright. None of this was her fault: I had left them at Churchill, and I hadn’t picked them up on Monday like I said I was going to do. All she had done was to perform an act of kindness for someone she didn’t even know, and whatever the outcome, I appreciated it. But I didn’t want her to hear in my voice how sad I was, so I decided to hold off on calling her until I knew I would sound better.
Unbeknownst to me, while I was idling in my car staring at the empty freezer bag, some of Alice’s co-workers – Rosa (or Rosie) and two guys – had driven to the big dumpster across the farm and were searching for the bandages. So less than half an hour after the first call, and before I was composed enough to call her, I heard from Alice again: Zenyatta’s rundown bandages had been found!!
I really don’t know quite how to express an adequate “thank you” to the people who would and did do all that they did so I could add this unconventional prize, from a horse I love unabashedly, to my collection, but what I do know is that my unique piece of Zenyatta memorabilia is even more special to me now as a reminder that human kindness does, in fact, still exist.
*Special thanks goes to @EJXD2 for the vocabulary lesson/thinking clearly on my behalf.
Posted by Frances J. Karon at 5:06 PM 5 comments:

Email ThisBlogThis!Share to TwitterShare to FacebookShare to Pinterest
Labels: Zenyatta

BC Classic Footage Shot from the Track

I’m in desperate need of video editing software but I think this will still be fun to watch even with the distractions:
Posted by Frances J. Karon at 9:05 PM 1 comment:

Zenyatta – Paddock Scene and Off to the Track

I still hope to write a blog about the pre- and post-Breeders’ Cup Classic experience with Zenyatta, but in the meantime, here is some video footage of the walkover with the big mare.
My videography skills leave something to be desired, yet I think this manages to convey something of what it was like to be there. Please pardon the rather embarrassing heavy breathing and sniffling – it was cold, I was out of breath, and my nose was running the entire time!
Posted by Frances J. Karon at 9:01 PM 1 comment:

Here are just a few photos (all I have the energy to upload) from the first day of Breeders' Cup racing:

As the Breeders' Cup Nears, the Big Show Hits Town

I am swamped – completely in-over-my-head, what-am-I-going to do?! swamped. And yet after getting up at 5am and putting in five solid hours of work this morning, I somehow, and quite without my permission, ended up in the car driving to Churchill Downs. What can I say, the devil made me do it! And yes, there will be hell to pay as I pull another all-nighter.
Was it worth it? Well, I was there for this, Zenyatta walking off the van after a police (and news helicopter) escort from the airport:
Before her arrival, I was squished in behind the barricade elbowing for room with the other members of the press when I heard my name and looked up to see Marcelino, Evening Jewel’s caretaker who I had met when they were stabled near Harmonious at Keeneland. “Come inside the barn,” Marcelino said, “you’ll see better.” So thanks to him, I had a lovely, roomy, unobstructed view of the big girl from the shedrow of the barn housing Evening Jewel, The Usual Q.T., Blink Luck, Dakota Phone, etc. – though facing into the sun (the location behind the barrier was not much better, light-wise).
After two spins on the gravel, Zenyatta’s groom Mario took her through the barn to the other side to stretch her legs for a few minutes on the grass (what little there is of it!): 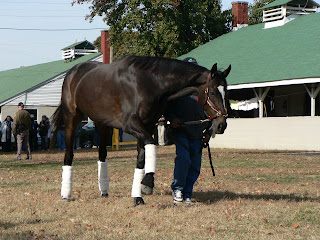 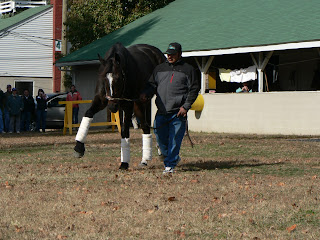 Another treat was getting to pet this girl’s nose, after the commotion surrounding Zenyatta had awakened her from her nap:
…and I saw a couple of other Breeders’ Cup horses from California arrive on the grounds who I haven’t even tried to identify yet. (I missed Lookin At Lucky, that much I know.):
So, was it? Worth it? When it involves seeing Zenyatta, the answer is always going to be an emphatic, “Yes! Yes, it was worth it!”
I could, however, have done without the accidental detour to Indiana on my way home.
Posted by Frances J. Karon at 5:38 PM 4 comments: