Irish-bred Theatrical, who died on Friday, August 31 at the age of 30, was the firstborn Group 1 winner for Nureyev, from his sire’s first foal crop of foals (one foal resulted in 1981 from a test breeding in 1980). Theatrical was a late bloomer, so chronologically, Classic winners Sonic Lady (a foal of 1983) and Miesque (1984) preceded him to Group 1-winning level.

Racing initially as a homebred for Mr. and Mrs. Bert Firestone, the dark bay or brown Theatrical was trained in Ireland by Dermot Weld. He won his only start at two, and at three, he became a stakes winner with his victory in the Derrinstown Stud Derby Trial S.-G2 prior to finishing second in the Group 1 Joe McGrath Irish Sweeps Derby. 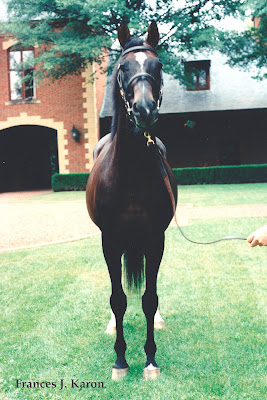 Theatrical made his North American debut in the 1985 Breeders’ Cup Turf, in which he ran eleventh. Returned to Europe, his best effort was a second in the Grosser Preis von Berlin-G1. He returned to the U.S. a month later, placing a non-threatening tenth in the Budweiser Arlington Million-G1.

He remained in the U.S., with trainer Bobby Frankel. Although he was unable to win a stakes race at four, he was second in the Breeders’ Cup Turf, the Oak Tree Invitational S. and third in the Hollywood Turf Cup Invitational -- all Grade 1 events -- in his only starts for Frankel that season. In the Breeders’ Cup, Theatrical was a neck behind 1986 turf champion Manila, and just ahead of Estrapade and Dancing Brave in third and fourth, respectively. 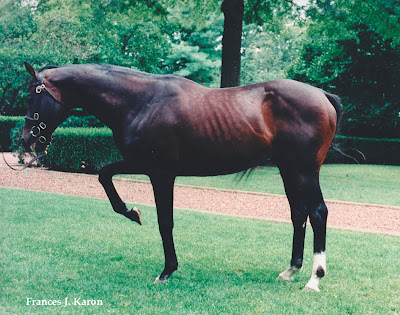 In January of 1987, he was switched to the barn of Bill Mott, under whose patient handling the temperamental, somewhat difficult horse came into his own as a five-year-old. In his debut for Mott, he was disqualified from second to 14th for bearing in during the running of the Bougainvillea Handicap-G2. Theatrical then put together a four-race win streak -- Hialeah Turf Cup H.-G1, Red Smith H.-G2, Bowling Green H.-G1, Sword Dancer H.-G1 (in which he was put up from second due to interference from first-under-the-wire Dance of Life) -- before the final loss of his career, a third (behind Manila and Sharrood) in the Budweiser Arlington Million-G1. 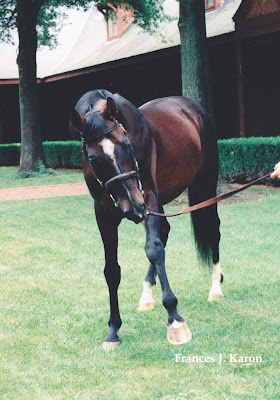 Theatrical rebounded with victories in three Grade 1 events: the Turf Classic S., Man o’ War S., and the Breeders’ Cup Turf. In the latter, he defeated Trempolino, fresh off a course-record win in the Prix de l’Arc de Triomphe. Gary Stevens, working as an analyst for NBC’s Breeders’ Cup telecast, said (in the video below) that Theatrical, under Pat Day, “just jerked the heart out of Trempolino.” The final time of 2:24 2/5 equalled the course record at Hollywood Park.

Owned solely at this point by Allen Paulson -- who had bought 50% of Theatrical for $5 million in 1985 prior to purchasing the Firestones’ remaining 35% share (Irishman Michael Smurfit owned the other 15%) the night before the 1987 Breeders’ Cup over a dispute about whose silks he would carry in the race -- Theatrical was voted champion turf horse in the U.S. and retired to stud at Paulson’s Brookside Farm, having earned over $2.9 million with a total of 10 wins, three seconds, and two thirds from 21 starts.

A mile-and-a-half turf specialist, Theatrical was an anomaly for Nureyev, whose sons and daughters primarily excelled at a mile. Theatrical inherited his love of distance from his dam Tree of Knowledge’s sire Sassafras, who defeated the great Nijinsky by a head in the 1970 Arc. Tree of Knowledge was a stakes-placed winner by Sassafras, sire of 55 stakes winners, and in addition to Theatrical, she foaled Taiki Blizzard (a Grade 1 winner in Japan, but recognized as only a Listed stakes winner internationally) and the dam of 1994 turf champion Paradise Creek.

Theatrical, who stood in Central Kentucky throughout his entire stud career, had the odds stacked against his emerging as a top sire in a country where precocity and speed on dirt are valued above all. Nonetheless, he became a notable stallion, due in no small part to Paulson’s belief in and support of his horse. After Paulson’s death, Theatrical moved to Hill ’n’ Dale Farm for the 2002 season, where he was pensioned in 2009 before his death on Friday.

Among Theatrical’s 48 Graded or Group stakes winners are these 20 Grade/Group 1 winners with their respective G1 wins:

~*Hishi Amazon (1991 filly out of Katies, by Nonoalco): Not included among Theatrical’s tally of G1 winners, Hishi Amazon won numerous races, including the Queen Elizabeth II Commemorative Cup, that were classified as Grade 1s in Japan only but that are now recognized internationally as Grade 1 events. She was a champion at two, three, and four. 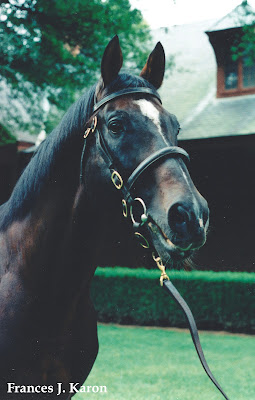 Theatrical was a favorite of mine because of his connection to Nureyev, and I visited him a number of times at Brookside and Hill ’n’ Dale. He was a tough horse, very much the “alpha male” around the barn, but certainly (in my limited interaction with him) was not mean. The photos (taken with a film camera) in this post are from one of my earlier trips to see him at Hill ’n’ Dale. 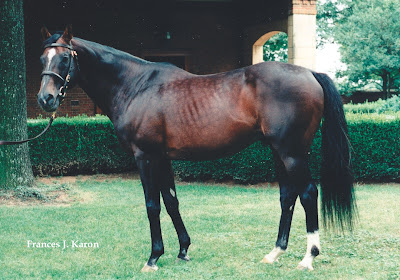