In May of 2012, I wrote a blog post on Japanese sire Deep Impact, who in two crops (at the time) of three-year-olds had already sired the winners of four Classic races. That Classics figure now stands at eight, with six individual Classic winners (Ayusan; Beauty Parlour; Deep Brillante; Gentildonna; Kizuna; and Marcellina) and a number of other Classic-placed runners from three crops of three-year-olds of racing age.

Clearly, a year and a half after my original post, Deep Impact has continued to stride forward: the son of Sunday Silence has gone from six to ten Grade or Group 1 winners, and yesterday his 2012 Triple Crown-winning daughter, Horse of the Year Gentildonna, became the first-ever dual winner of the 12-furlong Japan Cup-G1 -- Tokyo Racecourse’s flagship event -- nosing out Deep Impact’s three-year-old daughter Denim and Ruby, a Grade 2 winner, in the process.

This summer, thanks to Su-Ann Khaw’s initiative and with North American and European Trainer magazines’ adventurous backing, I traveled to Hokkaido, Japan, for a visit to Shadai Stallion Station, where Deep Impact stands, and an extensive tour of Northern Farm, breeder (as both Northern Farm and Northern Racing) of the first four horses home in yesterday’s big race, which it goes without saying is a phenomenal achievement.

If you’re interested in learning more about Japanese racing, I wrote a Trainer article (which begins here on page 44) on Northern Farm and also looked at the international influence of Japanese-bred horses (page 58 of the issue linked above). I’ve also done several posts on my time in Hokkaido, with photos that didn’t make it into the printed article: Little Snow at Northern Farm and New issue online and snippets from Japan; and an entry in TDN here.

Among the horses we viewed in Hokkaido were Gentildonna’s distinguished sire Deep Impact; her dam Donna Blini, a Group 1 winner in England; Deep Impact’s German Group 1-winning dam Wind in Her Hair; and Denim and Ruby, who is a whisker shy of being a Japan Cup winner.

I noted last year that Deep Impact was an outstanding cross with mares tracing to Northern Dancer. This pattern, which is more detailed in the previous Deep Impact post, has appeared in at least ten of the stallion’s 12 new stakes winners. In the wake of Gentildonna’s latest success, it seemed an opportune time to update the now 36 (up from 24 last May) stakes winners (7% to foals), although I was only able to find 35 of them.

As before, the list shows the Deep Impact’s black-type winners; the sires of their first two dams; and highlights the link(s), if any, to Northern Dancer through the first two damsires. Brackets indicate an indirect link (such as sire of the broodmare sire); the names of the stakes winners since May of 2012 are indicated in red:

Last week -- two days after Veterans Day -- I had the privilege of accompanying my great uncle (my mother’s uncle) on his “Honor Flight” (honorflight.org; he lives in Northern Ohio so we went through the Cleveland branch, honorflightcleveland.com), which flies veterans -- with first preference to World War II vets -- on an all-expenses paid day trip to Washington D.C. to view war memorials.

Twenty-five WWII vets and their “guardians” converged upon the Cleveland, Ohio, airport at just past four in the morning. Southwest Airlines flies the veterans for free, and the airline and all of its employees we encountered deserve major kudos for giving us great, great service. The TSA and Honor Flight team on the ground in Cleveland and D.C. were also superb, and along the way, strangers, some of them wiping tears from their eyes, the entire length of the airport terminals applauded our vets. We were welcomed to the Baltimore/Washington International Thurgood Marshall Airport by uniformed servicemen and servicewomen from, if I’m not mistaken, nearby Fort Myer.

My uncle works out five mornings a week -- he shows up at the gym before it is even open -- and is as independent as anyone I know, so I was there primarily to share in the experience with him; my job as his “guardian” was nonexistent. Actually, I got wrapped up in taking pictures and had a difficult time keeping up with him. Each veteran was required to utilize a wheelchair (provided for the day by the VA) at the airports, and were encouraged to use them at other locations. Uncle Herb, of course, eschewed the wheelchair in favor of walking whenever possible.

Uncle Herb (who will read this on his Kindle!) doesn’t really talk about the war. From the bits and pieces of information I’ve gathered, I know that he was drafted at the age of 20 and spent 13 months training in Colorado before he was deployed overseas in the 89th Infantry Division of the U.S. Army, and that he participated in the Battle of the Bulge. “But just the end of it,” he is quick to add when it comes up -- as if to detract from the abominations he must have witnessed. I know, too, that he was there on April 4, 1945, when the troops of the 89th, along with those of the 4th Armored Division, were the first Americans to liberate a concentration camp: Ohrdruf, in Weimar, Germany. He was a forward observer, member of the 914th Field Artillery Battalion, and achieved the rank of corporal, with honorable discharge papers identifying him as “Scout 761” and “carbine sharpshooter.”

I can’t even begin to fathom the horrors that Uncle Herb, and many of the 24 other WWII vets on his flight, saw first-hand, but it was my honor to be in their company. Many of the folks associated with Honor Flight are veterans as well, as were several of my fellow guardians, including one who was not much younger than the WWII vets (average age: 91) and who had been a POW in the Korean War, where two-thirds of the American POWs were killed as a result of war crimes.

It was sobering to visit the National World War II Memorial, which opened in 2004, with these men. Uncle Herb didn’t say much, but we walked around and took some photos, including some of him by the section inscribed with the Battle of the Bulge. Jim Renacci, a U.S. Congressman from Ohio, was by the Ohio pillar to take photos with the vets. Uncle Herb posed with the congressman as he was expected to do, but as soon as Renacci wandered off a few feet in the other direction, I snapped a solo shot of my uncle underneath his state’s pillar.

We also visited the Marine Corps War Memorial, United States Air Force Memorial, Vietnam Veterans Memorial (after which I made a quick detour up the steps of the Lincoln Memorial), and the Korean War Veterans Memorial. A large group of schoolchildren on a field trip detoured our way while we were walking to the Vietnam Wall, and many of them politely said, “Thank you for your service,” a phrase I heard repeated many times throughout the day.

Our final stop was at Arlington National Cemetery, which I could have happily spent hours exploring had we had the time. We watched the changing of the guard ceremony at the Tomb of the Unknowns, and then four veterans of our group placed a wreath at the tombs. I didn’t know until later that one of our veterans -- and one of those who participated in the wreath honors -- is the father of the bugler who sounded “Taps” at the ceremony. What a moment that was for them!

It was a long day -- we touched down in Cleveland after nine o’clock at night -- but a very special and fulfilling one that will, I think, remain forever with veterans and guardians alike. 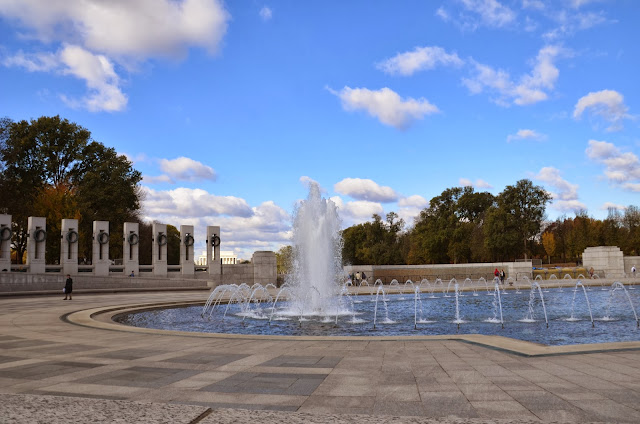 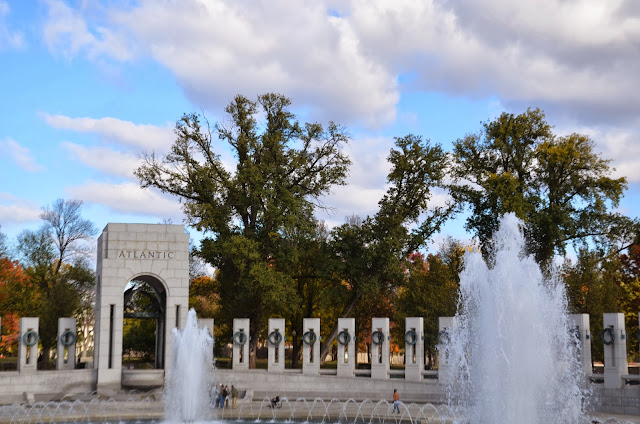 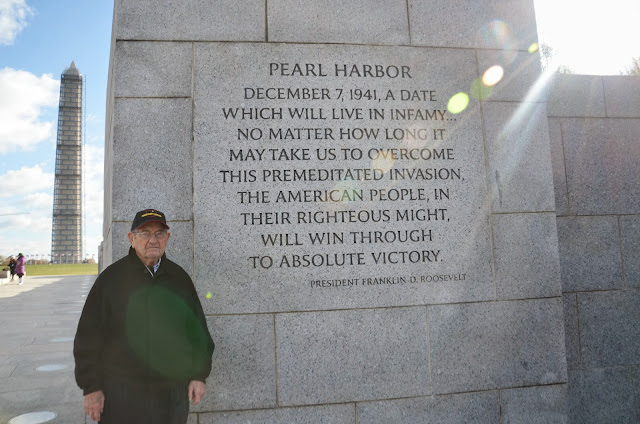 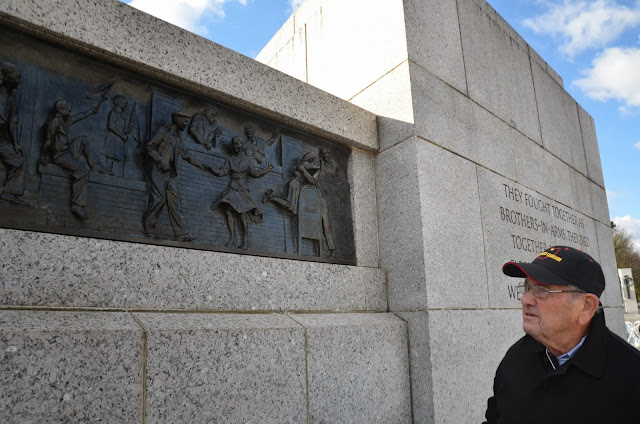 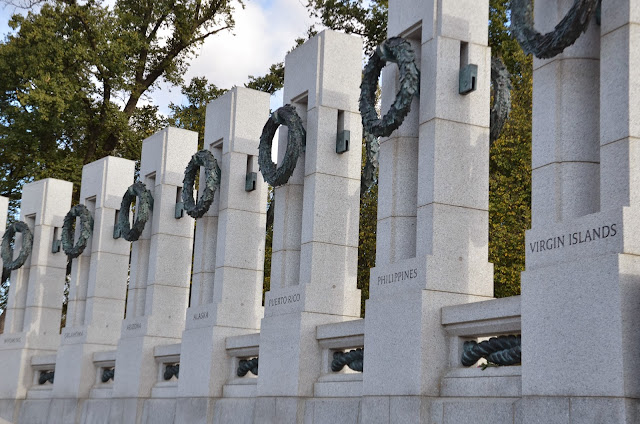 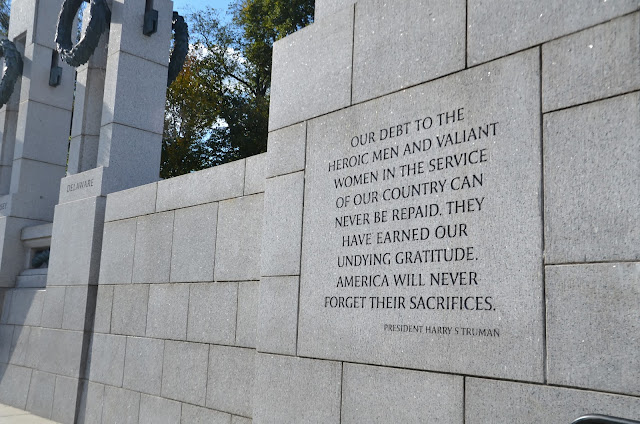 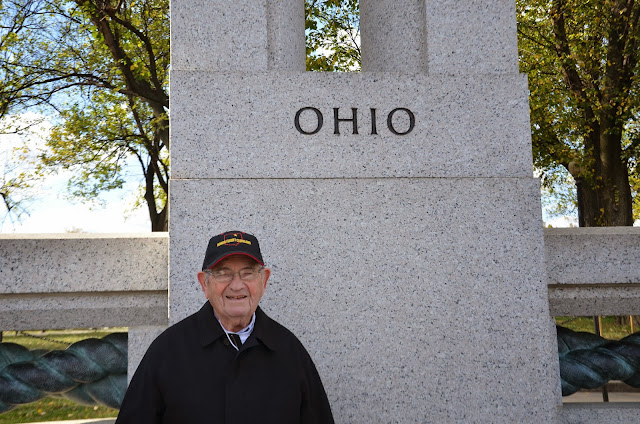 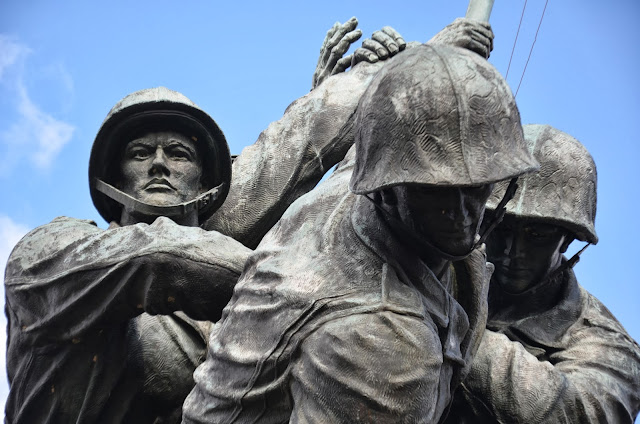 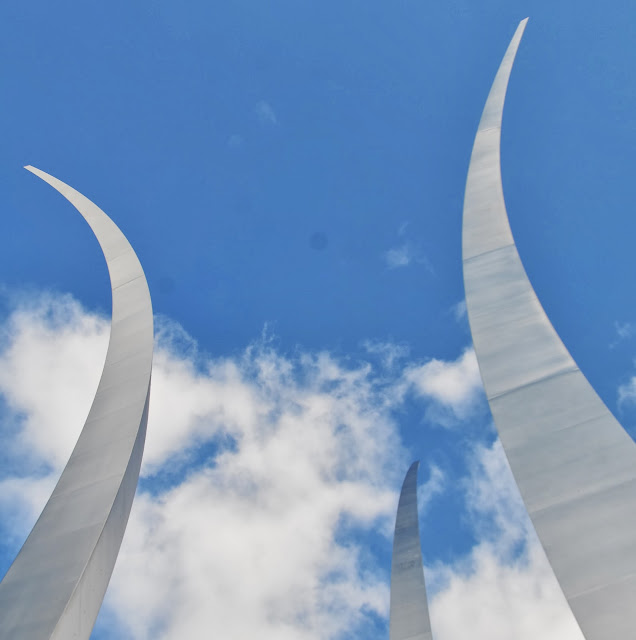 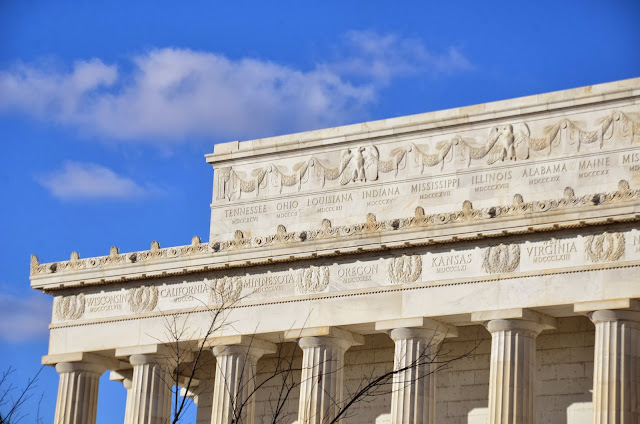 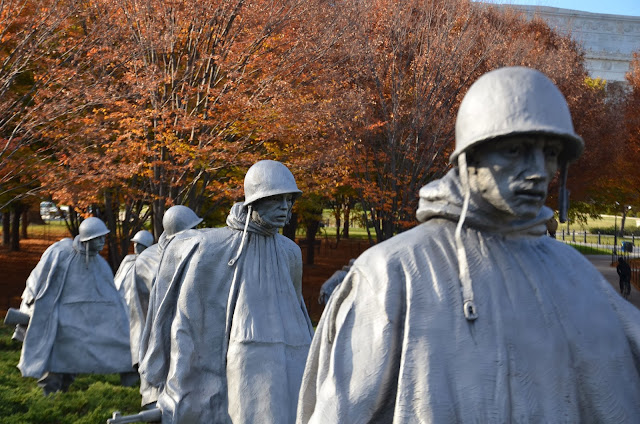 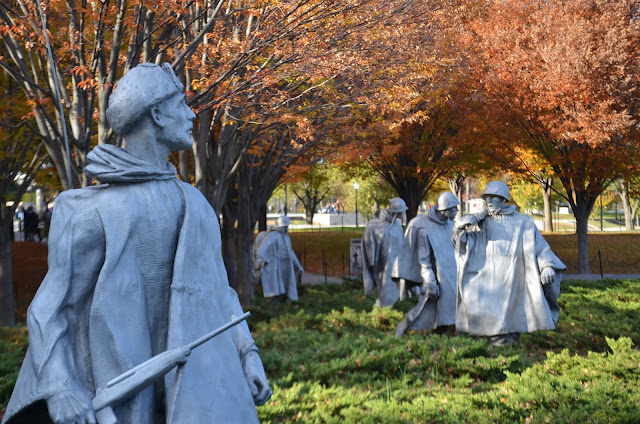 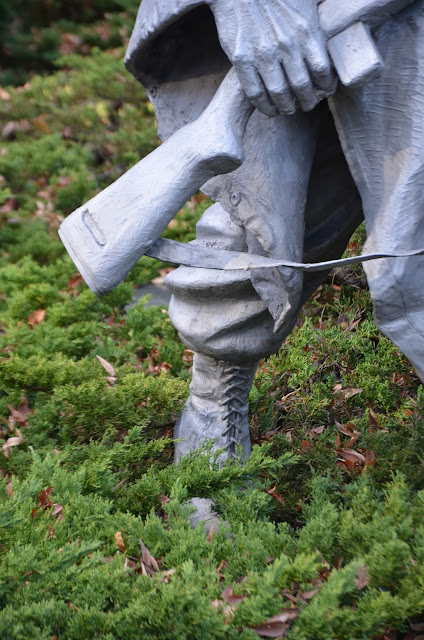 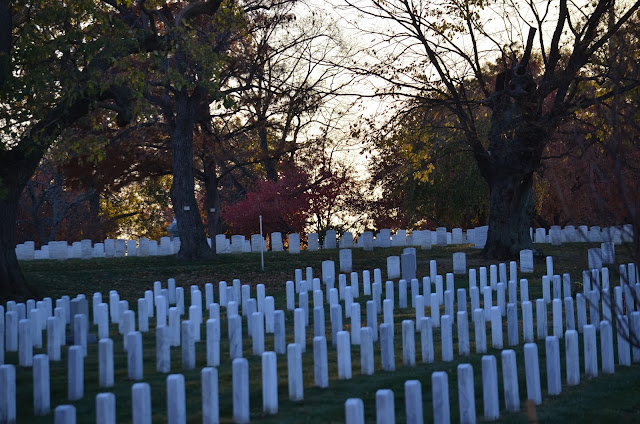 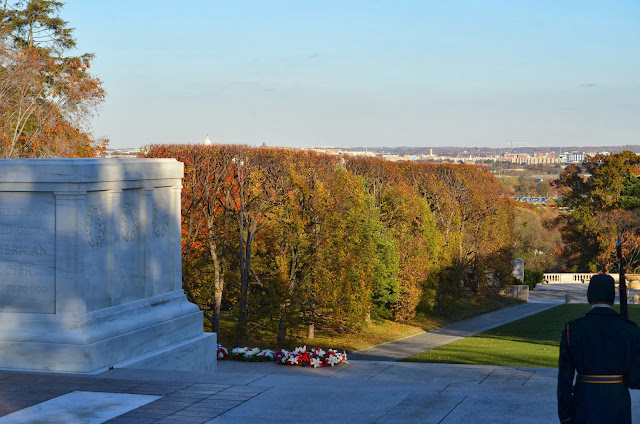 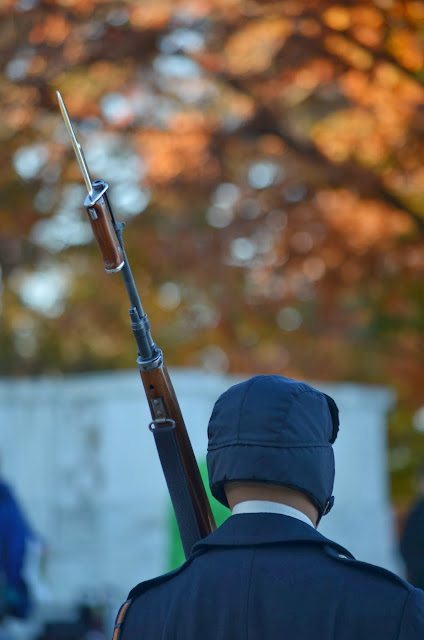 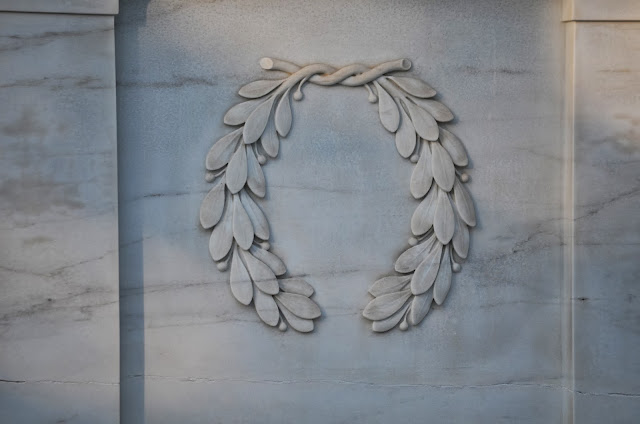 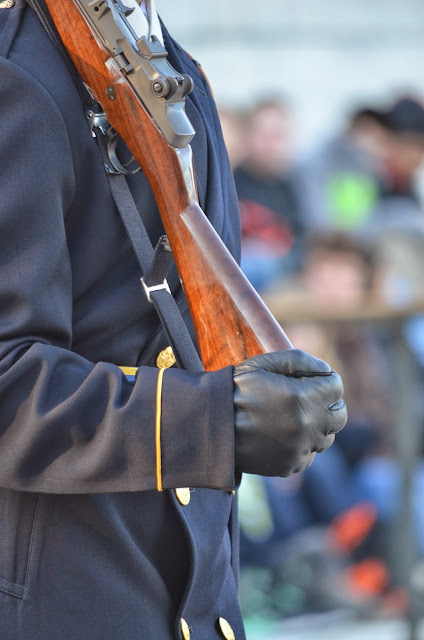 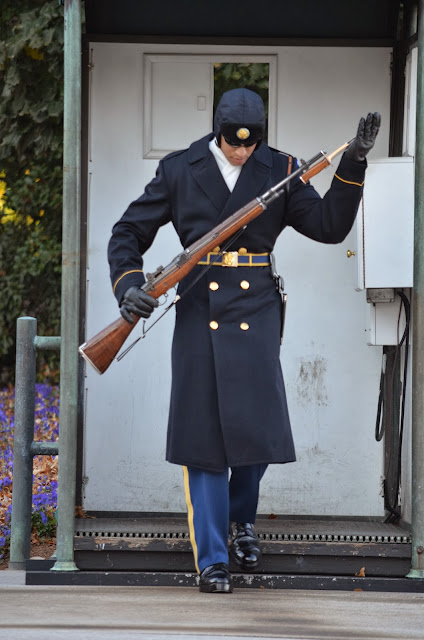 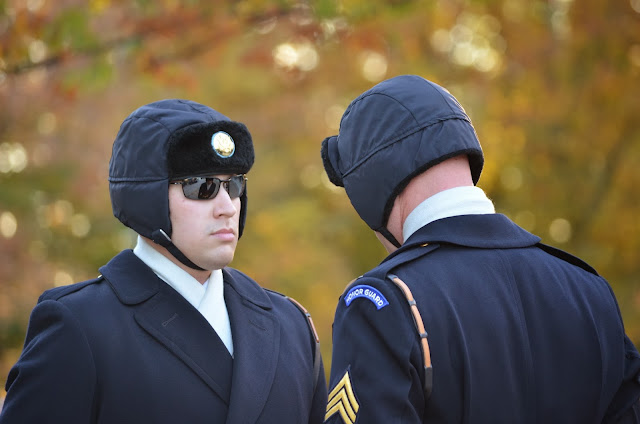 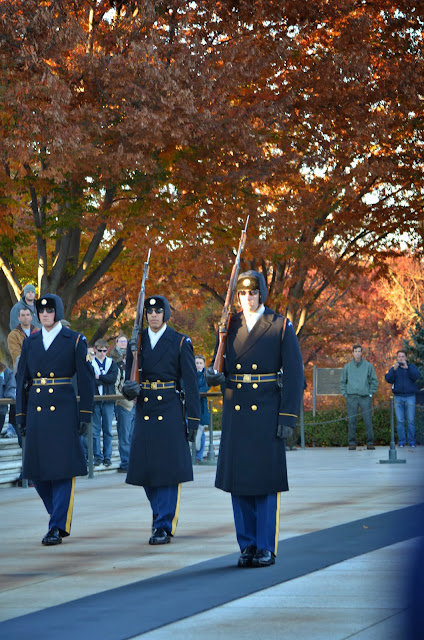 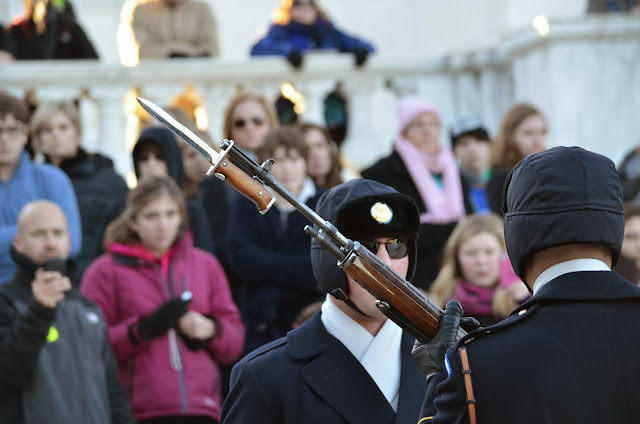 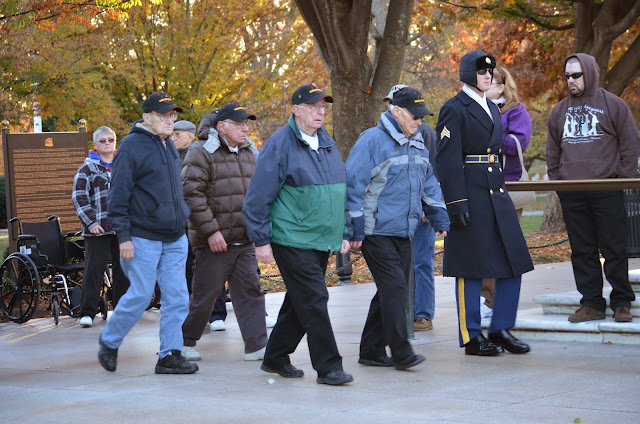 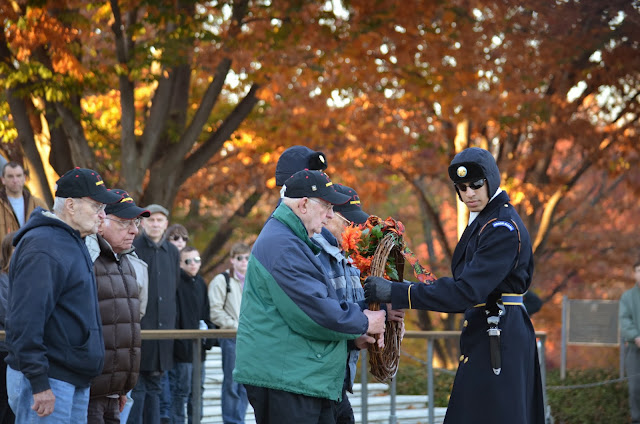 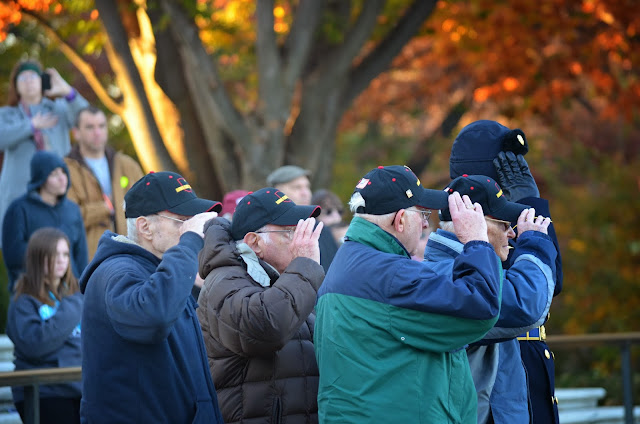