A Dream Start for Deep Impact

Sunday Silence’s Japanese Triple Crown-winning son Deep Impact has had a phenomenal beginning to his stud career, with four Classic winners – Beauty Parlour (Poule d’Essai des Pouliches/French 1,000 Guineas, 2012); Deep Brillante (Tokyo Yushun/Japanese Derby, 2012); Gentildonna (Yushun Himba/Japanese Oaks, 2012); and Marcellina (Oka Sho/Japanese 1,000 Guineas, 2011) – from his first two crops. In Sunday’s Japanese Derby, Deep Impact was, amazingly, represented by seven of the 18 runners, with his sons coming in first, third, and fourth.
The stud record of Sunday Silence is unparalleled in Japan, although it may yet be surpassed by one of his sons, possibly even Deep Impact, whose dam Wind in Her Hair was a Group 1 winner (of the Aral-Pokal) over 12 furlongs in Germany. Prior to Deep Impact, she produced his stakes winning full brother Black Tide; Veil of Avalon, a Grade 3 winner by Thunder Gulch; and the dams of stakes winners Jeremy-G2, Gold Blitz-G3, and Ayin Raqs. The last two named are by sons of Sunday Silence.

Wind in Her Hair’s sire Alzao (by Lyphard) was also a stakes winner over 12 furlongs, winning the Group 3 Premio Ellington in Italy. Her dam Burghclere was bred by the Queen of England; the filly’s best effort was a fourth in the 12 furlong Group 2 Ribblesdale Stakes. The Queen also bred her dam Highclere, who would go on to become the granddam of sires Nayef-G1 (champion), Nashwan-G1 (dual Classic winner), Unfuwain-G2, Alwasmi-G3, etc., all out of her daughter Height of Fashion.

There’s no doubt that Deep Impact’s pedigree marks him as a source of stamina, and he performed accordingly, winning ten stakes races from 10 - 16 furlongs. He raced from two to four and was Horse of the Year in Japan in 2005 and 2006. He won 12-of-13 starts, including the Japan Cup-G1, Tokyo Yushun (Derby), Satsuki Sho (2,000 Guineas), and Kikura Sho (St. Leger), in his native country. In one start in France, he was third in the Prix de l’Arc de Triomphe but was later disqualified for a positive post-race drug test showing Ipratroprium, to the surprise of his trainer Yasuo Ikee.

On Sunday, after Deep Brillante completed his sire’s Oaks/Guineas sweep, Sid Fernando (who wrote this blog entry on Deep Impact in March) pointed out in a Twitter discussion that both of Deep Impact’s Classic winners in Japan this year are inbred/linebred to Lyphard, which led me to look up the pedigrees of all his stakes winning progeny.

This Halo/Northern Dancer pattern produced Deep Impact, who is 4x6 to Almahmoud, and reinforcing it in his foals is proving to be a good method. Here is a list of his stakes winners, their highest level of win, sires of their first two dams, and their branch(es) of Northern Dancer in blue, with indirect strains (i.e. through broodmare sire of a sire) identified by [brackets]:

Group 3 winner Verxina adds a third strain of Almahmoud through her broodmare sire Machiavellian, whose second dam is a half-sister to Northern Dancer, by Halo. She actually has (the bad tempered) Halo 3x4x5 in her pedigree, which begs the question, what is her temperament like?!

Verxina’s third dam Morn of Song is a daughter of Canadian Horse of the Year Glorious Song (by Halo out of Ballade). Glorious Song or her full sister Angelic Song (and thus, also a second strain of Halo) appear in six of Deep Impact’s stakes winners: Beauty Parlour-G1; Adam’s Peak-G3; Danon Ballade-G3 (who has no Northern Dancer from his dam); Frere Jacques-G3; Verxina-G3 (whose dam is a half-sister to Frere Jacques); and Barocci. Champion Devil’s Bag, a full brother to Glorious Song and Angelic Song, has not yet clicked with Deep Impact, though he does show up in two Group winners by other sons of Sunday Silence.

Aquamarine, who is the only black-type winner inbred 3x2 to Lyphard’s son Alzao, combines two foals of 1965 Broodmare of the Year Pocahontas: Lady Rebecca (by Sir Ivor) is 4x3, and her half-brother Tom Rolfe (by Ribot) is x5.

One would have to think that mares incorporating Danehill (who like Machiavellian brings in a different daughter, Spring Adieu, of Natalma) will pay dividends with Deep Impact, or indeed with any Sunday Silence-line sire. This cross has nine stakes winners, led by Australian Oaks-G1 winner Sunday Joy. Group 2 winner Fenomeno, who fell a nose short in overtaking Deep Brillante in the Japanese Derby, is by Stay Gold (a son of Sunday Silence) out of a daughter of Danehill.

It would be interesting to see Highclere duplicated in Deep Impact’s progeny. As the most likely source is  Height of Fashion, which would lead to inbreeding or linebreeding to Busted (through his daughter Burghclere and paternal granddaughter Height of Fashion), it should be noted that Deep Brillante is 4x5 to Busted.

Su-Ann Khaw, on Twitter as @inkmarksofsu, was fortunate enough to visit Deep Impact’s home Shadai Stallion Station as well as Northern Farm (where Deep Impact was born and raised) last week. Among the Japanese racing royalty she saw were Deep Impact and many of his foals and yearlings. Her blog post has a lot of information and photos.
Posted by Frances J. Karon at 9:07 AM No comments:

"Other" Horses at Churchill This Week

It may be hard to believe, but the Kentucky Derby and Kentucky Oaks hopefuls aren't the only nice horses at Churchill Downs this week!

Here are a few others:

Follow-up on Derby and Oaks Contenders at Churchill 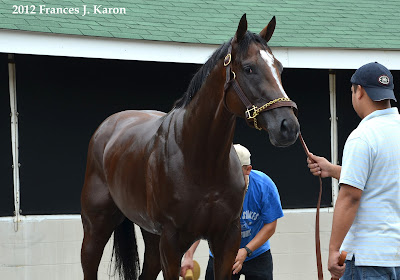