Even the best laid plans...

...sometimes go awry.
Despite getting up at 5:30am to drive to Louisville to watch Derby and Oaks contenders train in their designated time slot of 8:30-8:45, I was foiled by the Kentucky Derby Festival Marathon, which blocked off all roads into Churchill Downs from the only way this directionally challenged person knows how to get there. Each police officer I asked directed me to another blocked road. By the time I asked Ed DeRosa of Thoroughbred Times how to maneuver around the [expletive deleted] blockades and successfully got to the track, I caught just the last of the Classic hopefuls. (Mind you, I was only a few blocks away from Churchill at 7:40, but it was 8:35 when I actually got there.)
The horses on the footage below are, in order of appearance:
Summer Soiree
Daisy Devine (blinkers with four yellow wraps)
Stay Thirsty (misidentified by the woman beside me as Uncle Mo)
Uncle Mo
Midnight Interlude
Plum Pretty
Lilacs and Lace
Santiva
Watch Me Go
Daisy Devine (not Daisy “Fever” as I called her)
Midnight Interlude
Lilacs and Lace
Summer Soiree
Brilliant Speed
The Factor
You’ll hear an outrider saying Uncle Mo stumbled and nearly threw his rider after they had passed us. I didn’t see it so won’t speculate on what, if anything, happened. None of the recaps I found on the morning’s activities commented on any such incident.
Here are some photos from the morning:

For my future reference, I was informed by one of the men on the backstretch that had I turned at the, er, “titty bar,” I would have been able to avoid all of the closed roads and get to the track with ease. Shocking how I didn’t know about that shortcut...
Posted by Frances J. Karon at 4:06 PM 1 comment:


A quick entry to acknowledge the loss of the legendary sire Sadler’s Wells in Ireland today at the age of 30. (He celebrated his actual 30th birthday 15 days ago, on April 11th.) No doubt the Racing Post will have comprehensive tributes by my friend Tony Morris (also a legend!) and other experts detailing the exploits of Sadler’s Wells as a racehorse, sire, and his legacy as sire of sires in the days to follow.

Below is Sadler’s Wells’ win in the 1984 Phoenix Champion Stakes (his only victory I was able to find on YouTube). Notice that among the vanquished are the fillies Flame of Tara, who produced his marvelous three-time Classic-winning daughter *Salsabil (Irish Derby, English 1,000 Guineas, and Irish Oaks) in his second crop; and Princess Pati, dam of a Group-placed runner by him:

On a personal note, I was fortunate enough to spend an afternoon at Coolmore in the autumn of 1998. Having been working at the gray, wet Goffs sales grounds near Kildare for the Orby and Challenge yearling sales, one day I escaped to the blue skies and green grass at Fethard. Coolmore associate and one-time general manager Bob Lanigan (whose son David, now a successful trainer in England, worked with me at Walmac Int’l some years later) arranged the visit, and Tim Corballis gave me a grand tour of the gorgeous farm.

I remember as Sadler’s Wells, covered in a light dusting of dried mud, was led out for a face-to-face meeting. He seemed very kind and stood quietly but attentive, looking at me as intently as I looked at him, and allowed me to scratch his pink nose. I would have stayed for hours, but when after a couple of minutes he turned his distinctively long head toward his paddock, it seemed time to go.

Over the years, I often harrumphed at Sadler’s Wells because he was a nephew of my favorite, Nureyev, and his success relegated Nureyev to an undeserved role as understudy in the family. Sadler’s Wells had many advantages over Nureyev at stud -- better fertility; a European base; and no direct competition from the likes of Mr. Prospector, Danzig, and Storm Cat. They were both great, but there is no question that Sadler’s Wells has had a wider influence and exerted a greater impact on the breed. His son El Prado was one of my favorite Kentucky sires even from the time he was standing for $7,500 at Airdrie Stud, long before his fee peaked at $125,000. With El Prado’s 2009 death and Powerscourt’s move to Turkey, Perfect Soul is the only Sadler’s Wells who remains advertised at stud in Kentucky, but El Prado’s popular sons Medaglia d’Oro and Kitten’s Joy are also doing their part to keep the Sadler’s Wells line going strong in the U.S.

Sadler’s Wells’ European flag flies high through the many leading sire sons, including Galileo and Montjeu, and grandsons left in his wake. The powerful influence of this “Legend Maker” (the apt name of one of his 320+ stakes winners) is set to continue for the foreseeable future.

*Here is a look at the three-year-old season of Salsabil (“River of Heaven” as I recall), with commentary from her trainer John Dunlop and jockey Willie Carson. The year was 1990, six years before her death from cancer:

Posted by Frances J. Karon at 4:30 PM No comments:

Last weekend’s $1,000,000, Grade 1 Arkansas Derby winner Archarcharch (Arch – Woodman’s Dancer, by Woodman) has arrived at Churchill Downs ahead of a planned start in the Kentucky Derby on May 7. His popular trainer “Jinks” Fires hopes to pull off a huge score with Robert and Loval Yagos’s colt, who despite a third (albeit distant) in the Grade 2 Rebel and a win in the Grade 3 Southwest, Archarcharch paid more than $50 to win the Arkansas Derby.
Archarcharch is familiar with the track at Churchill, where in late November he made his first start, running second in a maiden special weight before shipping to warmer climates for the winter and spring racing seasons.
Churchill is also, of course, the scene of the thrilling 2010 Breeder’s Cup Classic won by Blame three weeks before Archarcharch’s debut, as well as where Pine Island broke down during the 2006 Distaff. Besides being by Arch, Blame and Pine Island have something else in common with Archarcharch: damsires by sons of Mr. Prospector out of daughters of Buckpasser. Historically, Roberto and Mr. Prospector nick well in pedigrees together, but these three are the only Grade 1 winners to have emerged to date through Arch.
Blame and Pine Island are out of mares by Seeking the Gold, while Archarcharch’s broodmare sire is Woodman. (Seeking the Gold and Woodman are both from Phipps female families as well.) Another of Arch’s stakes winners, Arch Mistress (a Group 3 filly in South Africa), is out of a mare by Black Tie Affair (Ire), whose sire Miswaki is another representative of the Mr. Prospector/Buckpasser cross.
But Blame and Archarcharch have a deeper connection, and not just that the sires of their second dams (Nijinsky II for Blame and Nureyev for Archarcharch) are sons of Northern Dancer: Blame’s granddam Bound is a three-parts sister to Archarcharch’s great-grandsire Nureyev, putting the mare Special in the third generation of Blame and fourth of Archarcharch.
What is also interesting (well,  okay...at least to me) is that Nureyev appears in three other stakes winners sired by Arch. Two of these – Irish Group 3 winner Arch Swing and Arch Rebel (also in Ireland, a 16-furlong, Group 2 winner over hurdles and later a three-time Listed winner from a mile to 10 furlongs on the flat) – are, coincidentally (?!), closely related to Archarcharch through their second dam, Pattern Step.
Trained by Charlie Whittingham for owner/breeder Nelson Bunker Hunt (of Dahlia fame), this daughter of Nureyev won 5-of-12 starts and finished second four times at two and three, all while racing exclusively in California. She won the Hollywood Oaks-G1 on the dirt (a very rare Grade 1 winner on that surface for turfy sire Nureyev) and the Listed Providencia Stakes (on turf), and placed in the Grade 3 Honeymoon Handicap, Santa Ysabel Stakes, and Senorita Stakes. (Her dam, the *Commanding II mare Tipping Time, had also won the 1969 Hollywood Oaks.)
As a broodmare, Pattern Step foaled two minor stakes winners (Seattle Pattern, by Seattle Slew; and Total Bull, by Fusaichi Pegasus) from 13 foals, but as a graded stakes-winning daughter of the great broodmare sire Nureyev, her produce record is disappointing.
Pattern Step has, however, come good through her daughters, especially when Arch is involved. Three individual daughters – Gold Pattern (winner; by Slew o’ Gold, whose dam is, like Woodman, out of a Buckpasser mare), Sheba’s Step (unraced; by Alysheba and therefore linebred to the Rough Shod family), and Woodman’s Step (Grade 2 stakes-placed; by Woodman) – are responsible for three of Arch’s 26 stakes winners. (Another daughter, the Mr. Prospector mare Nortena, is dam of a stakes winner by Arch’s sire Kris S.)
It’s fair to suggest that Archarcharch owes his existence to the previous success of Arch Swing, who in addition to being a Group 3 winner was second in the Irish 1,000 Guineas-G1, and Arch Rebel. The three-year-old has already surpassed his cousins, and whether or not he wins the Kentucky Derby in two weeks, one could say that the pattern for success is in his genes.
Posted by Frances J. Karon at 1:25 PM 1 comment:

One day before running in the Grade 3 Transylvania Stakes at Keeneland, Pluck (More Than Ready - Secret Heart, by Fort Wood) had a morning schooling session in the paddock. Depending on the outcome of tomorrow’s race, Team Valor International’s homebred winner of last season’s Breeders’ Cup Juvenile Turf may head to France for the Poule d’Essai des Poulains or to Ireland for the Irish 2000 Guineas. Graham Motion trains the colt. 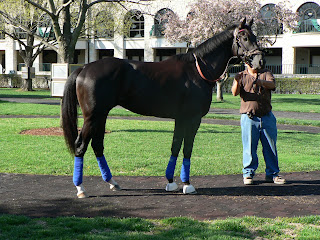 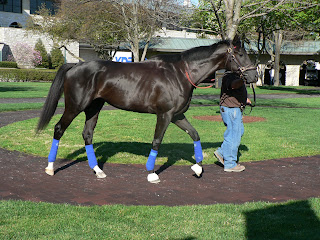 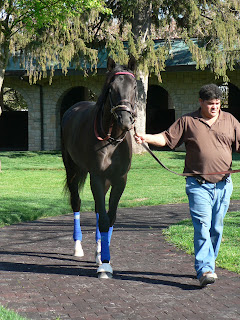