With the field set for the 2014 Kentucky Oaks on May 2nd, what stood out in the final entries is this: Of the 13 fillies -- one less than allowed to run in the race -- ten trace to Mr. Prospector’s direct male line, and the other three to A.P. Indy. Of the ten Mr. Prospectors, eight are linked through that sire’s son Fappiano, and seven of these through Fappiano’s Kentucky Derby-winning son Unbridled. Tapit (click here to read a previous post), the sire of 4-5 morning line favorite Untapable, is out of a mare by Unbridled.

This heavy influence of one sire in such a race is pretty remarkable, although not dissimilar to the influence of Sadler’s Wells and Danzig in Classic races in Europe these days.

Fappiano was bred and owned by the great John Nerud, a now-101-year-old who trained Gallant Man (previous post here) and whose son Jan (later conditioner of his father’s turf champion Cozzene) was Fappiano’s trainer. The bay colt was one of 27 Grade 1-winning males sired by Mr. Prospector, and his lone win at top level came when in the 1981 Metropolitan Handicap as a four-year-old. Two of his four career stakes wins were over a mile, but at two, he established a 6-furlong track record of 1:08 3/5 when he won the Morven Handicap at Meadowlands, and his Discovery Handicap-G3 win at three was over a distance of nine furlongs. 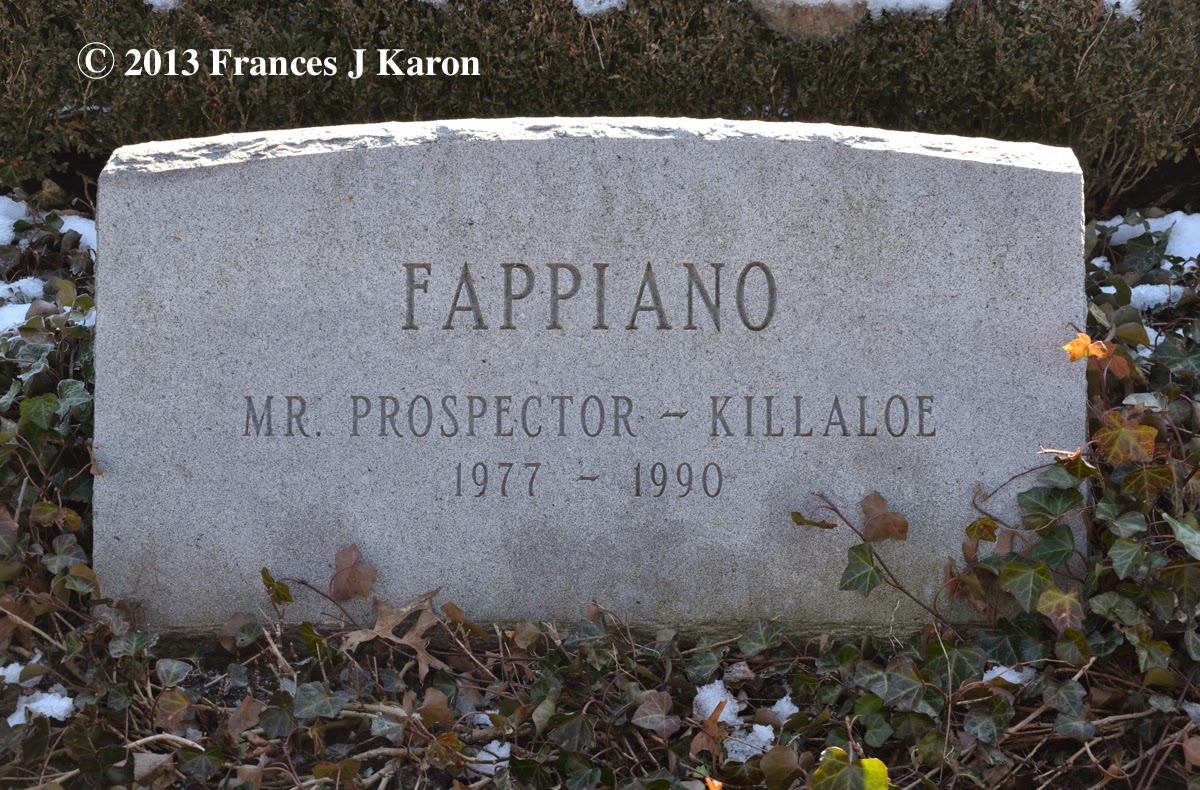 Racing from two to four, Fappiano made 17 starts and won ten races -- which also included the Forego Handicap at Belmont -- with three seconds and one third, earning $370,000. In his final start, he ran fifth, a nose behind Pleasant Colony in fourth, in the ten-furlong Marlboro Cup in September; he was syndicated two days later for $300,000 a share and retired to stud at Tartan Farms in Florida for the 1982 breeding season, standing alongside top sire In Reality. Tartan’s homebred champion Dr. Fager, trained like his champion half-sister Ta Wee by the senior Nerud, had stood there as well until his death in 1976.

Produced from the winning Dr. Fager mare Killaloe, Fappiano was from his sire’s second crop, well before it was proven what a great sire of sires Mr. Prospector would turn out to be. He was Killaloe’s second foal; the first was Jedina (by What a Pleasure), a minor stakes winner who was to become the dam of Grade 1 winner Clabber Girl for Nerud. In all, Killaloe had 11 foals, five of them stakes winners -- three Graded. (The other Graded winners were Portroe, a full brother to Fappiano; and Torrential, a three-parts brother by Mr. Prospector’s son Gulch.) Killaloe’s daughter Bought Twice (In Reality) foaled Belmont Stakes winner Commendable (by Gone West, by Mr. Prospector).

Fappiano filled a void in Florida left by Mr. Prospector’s move in 1981 from Scott Savin’s Aisco Farm in Ocala to Claiborne Farm in Paris, Kentucky, and he struck in his first crop, with four Graded stakes winners, spearheaded by two-year-old champion Tasso, winner of the Breeders’ Cup Juvenile and Del Mar Futurity, both Grade 1s. The young continued to do very well in subsequent crops, and when Tartan dispersed the majority of their breeding stock in 1987, Fappiano moved to Lane’s End Farm in Kentucky, where he died in the autumn of 1990 after three breeding seasons. He never led the sires list but was fourth in 1987, third in 1989, and second in 1990.

At the Tartan sale in 1987, Peter Brant paid $455,000 for Killaloe, then aged 17 and not in foal; Brant bred her last two foals, the aforementioned stakes winners Portroe and Torrential. But the best deal of the sale went to Frances Genter (breeder and owner of In Reality), who purchased the Le Fabuleux mare Gana Facil in foal to Fappiano for $275,000, and, for $70,000, the mare’s weanling Fappiano colt. Gana Facil’s second dam was by Genter’s In Reality, and her third dam Aspidistra had also produced Ta Wee and Dr. Fager, making her Fappiano foals 4x4 to Aspidistra. Genter’s new weanling acquisition was Unbridled, the champion three-year-old, Kentucky Derby, and Breeders’ Cup Classic winner of 1990, while the foal in utero was Wood Memorial Stakes-G1 winner Cahill Road. 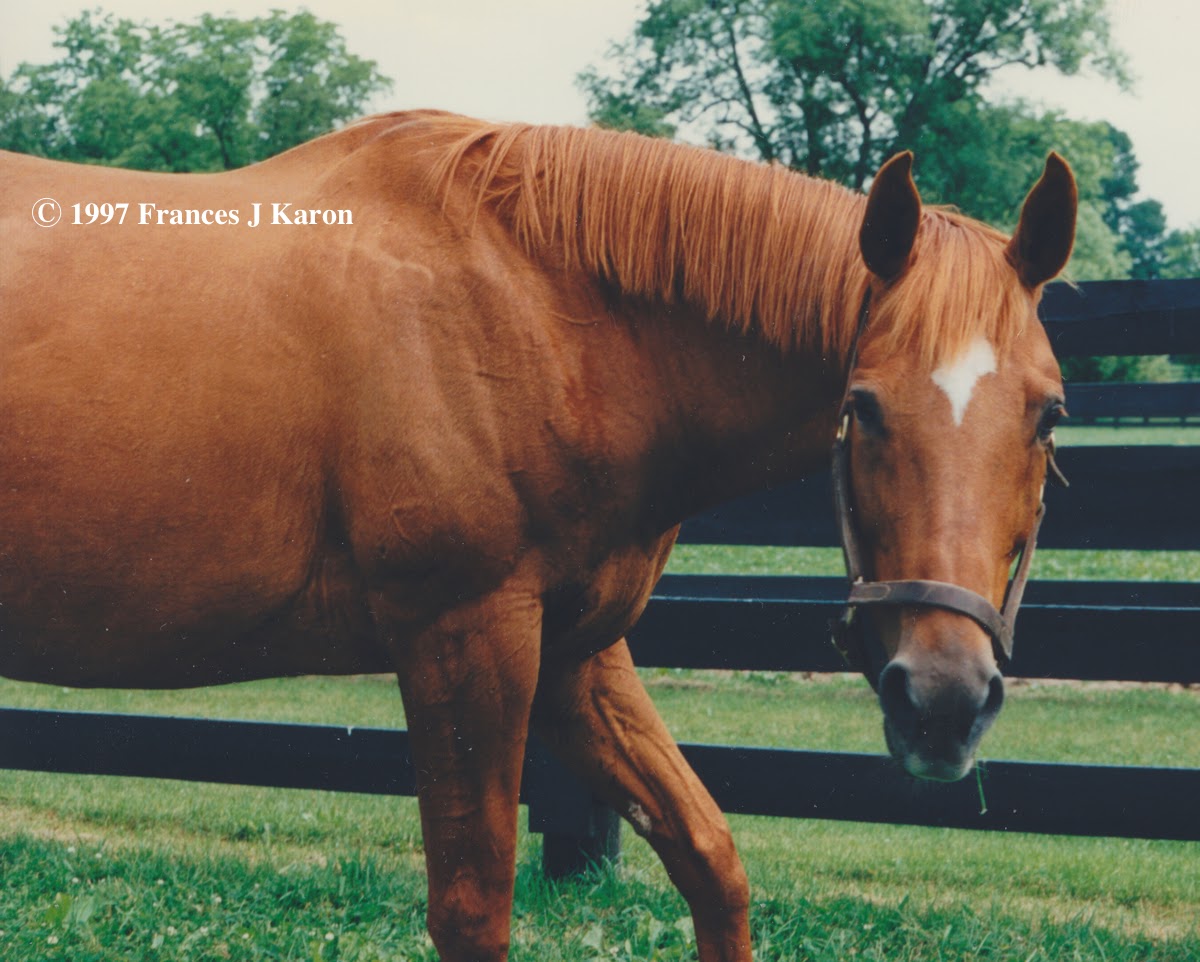 Another good buy from the Tartan dispersal was a Fappiano yearling colt out of the Dr. Fager mare Demure. Later named Quiet American, he was a $300,000 sale to Darley Stud Management, who won the Grade 1 NYRA Mile with him. Interestingly, he was inbred 4x3 to the mare Cequillo, who was his and Fappiano’s third dam. [Inbreeding was a major factor in many stakes winners by Fappiano or his sons, but that is a subject for another time.]

Fappiano was an 11% stakes sire of 47 stakes winners. Nine of his sons were Grade 1 winners, one of whom -- Grand Canyon -- died at three, and another of whom earned his big win in Peru, leaving seven G1-winning sons to go to stud in North America. Remarkably, of these seven, many went on to considerable success as stallions: Unbridled (48 stakes winners, or 8%; died in 2001); champion sprinter Rubiano (33 SWs, or 6%; died in 2002); Quiet American (53 SWs, 5%; pensioned at Darley); and Cryptoclearance, a top three-year-old of his year (40 SWs, or 3%; died in 2009). Cahill Road got a few nice ones but couldn’t compete with his older brother, ending his career in Washington with four Grade 3 winners to his credit. Defensive Play (sire of one Grade 1 winner, in Australia) and Tasso (sire of one Grade 1 winner, in Italy) were disappointments.

For a sire who was represented by only seven Grade 1 sons at stud in this country, Fappiano has left a tremendous legacy through five of them, and he is also sire of the broodmare sire’s of one of the best stallions in the U.S. in Tapit, whose Unbridled dam is a three-quarters sister to Rubiano  and who, with War Front (Rubiano dam), is the most expensive stallion currently at stud in the U.S. at $150,000.

With 69% of the Kentucky Oaks field this year representing the male line of Fappiano, chances are good that his line will get its first Oaks winner. The Derby is not as well represented, with just Candy Boy (by Candy Ride).