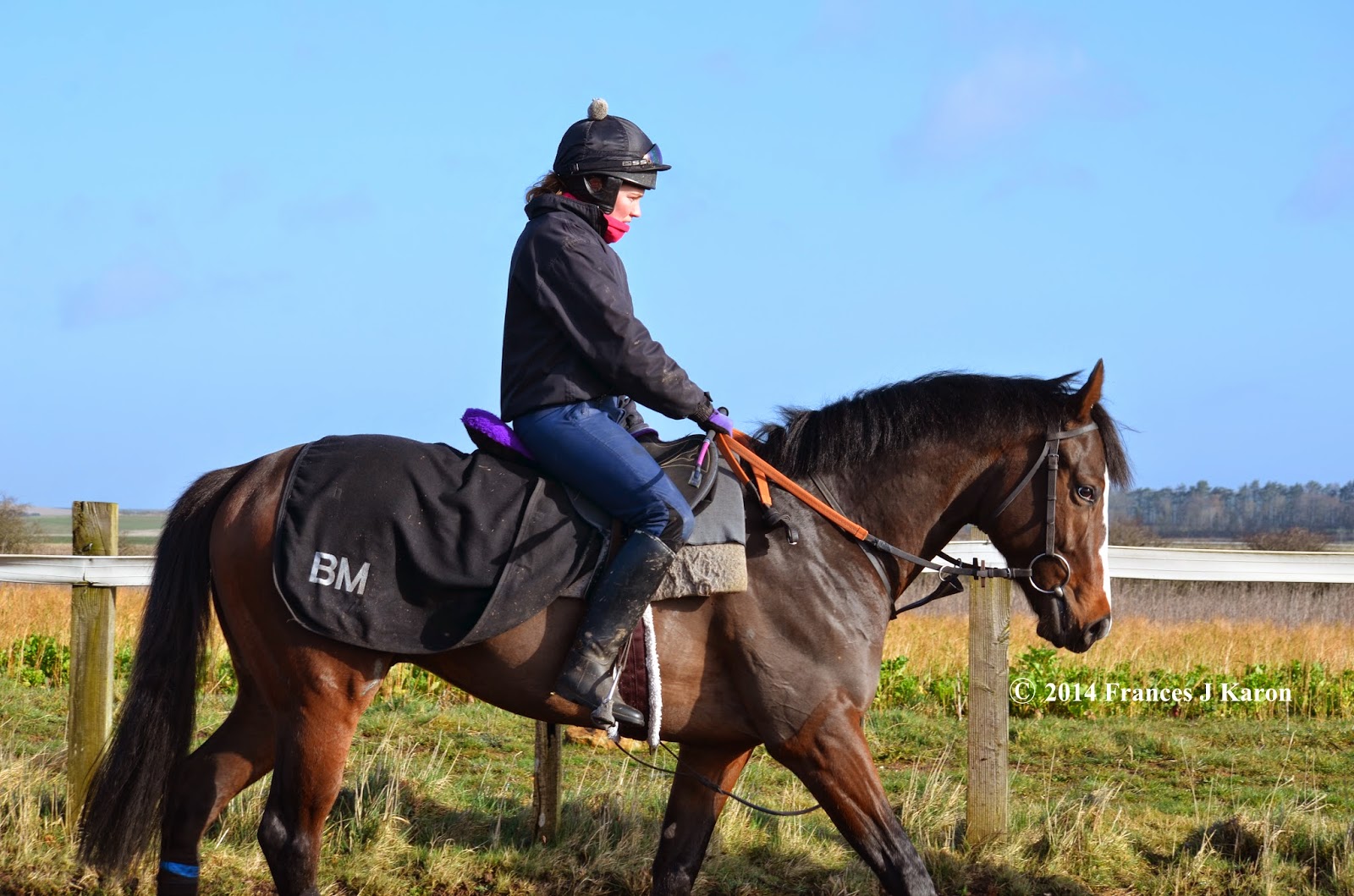 The new issue of European Trainer is online, featuring among other things my cover profile on Brian Meehan. You can access the magazine directly here, or if you don’t mind filling out a 30-second survey (which would be appreciated by my publisher), here.

Among many top horses Brian has conditioned in his 20-plus years as a trainer are two Breeders’ Cup Turf winners (Red Rocks and Dangerous Midge); David Junior (a four-time Group 1 winner); and Donna Blini, the Group 1-winning filly who broke one of Meehan’s fingers and went on to produce Japanese Filly Triple Crown winner Gentildonna (by Deep Impact), who runs in today’s Dubai Sheema Classic in the U.A.E. 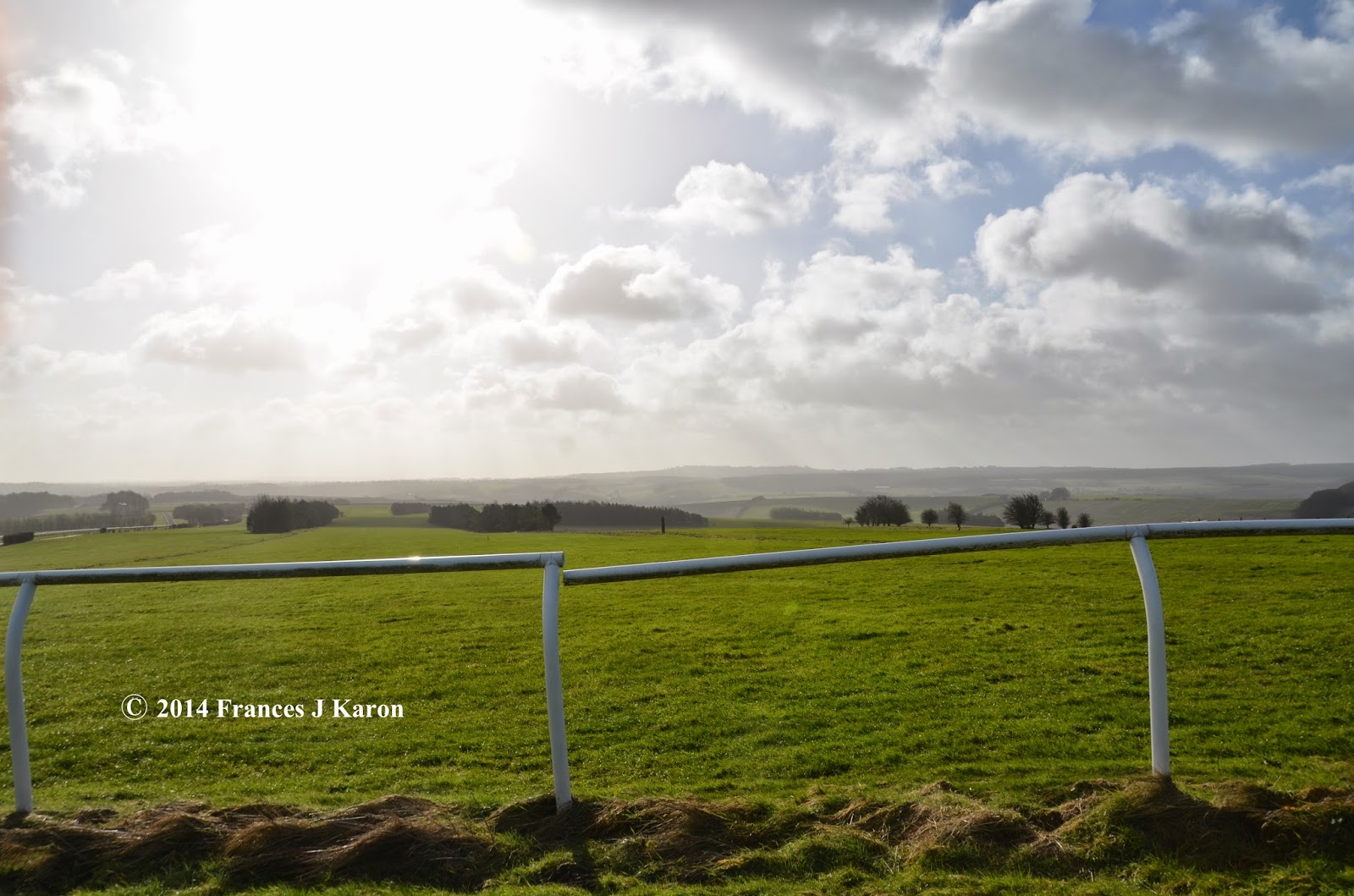 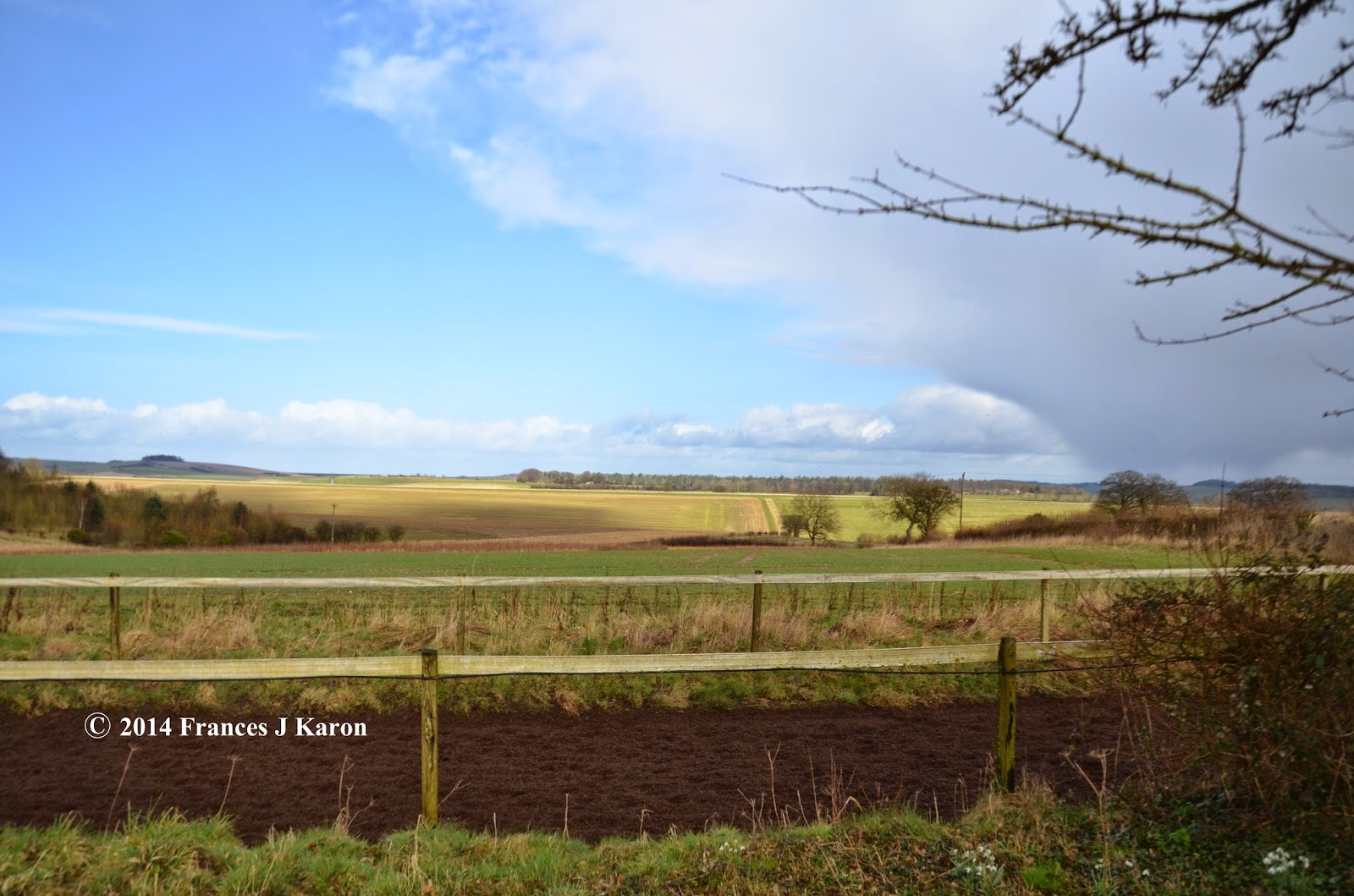 Brian has been based at the Sangster family’s fantastic Manton House Estate in Wiltshire, U.K., since 2006. Of Manton, he says, “It’s a great place. The trouble is you never want to leave it.” After the morning I spent there last month, I’m going to have to agree with Brian on that. 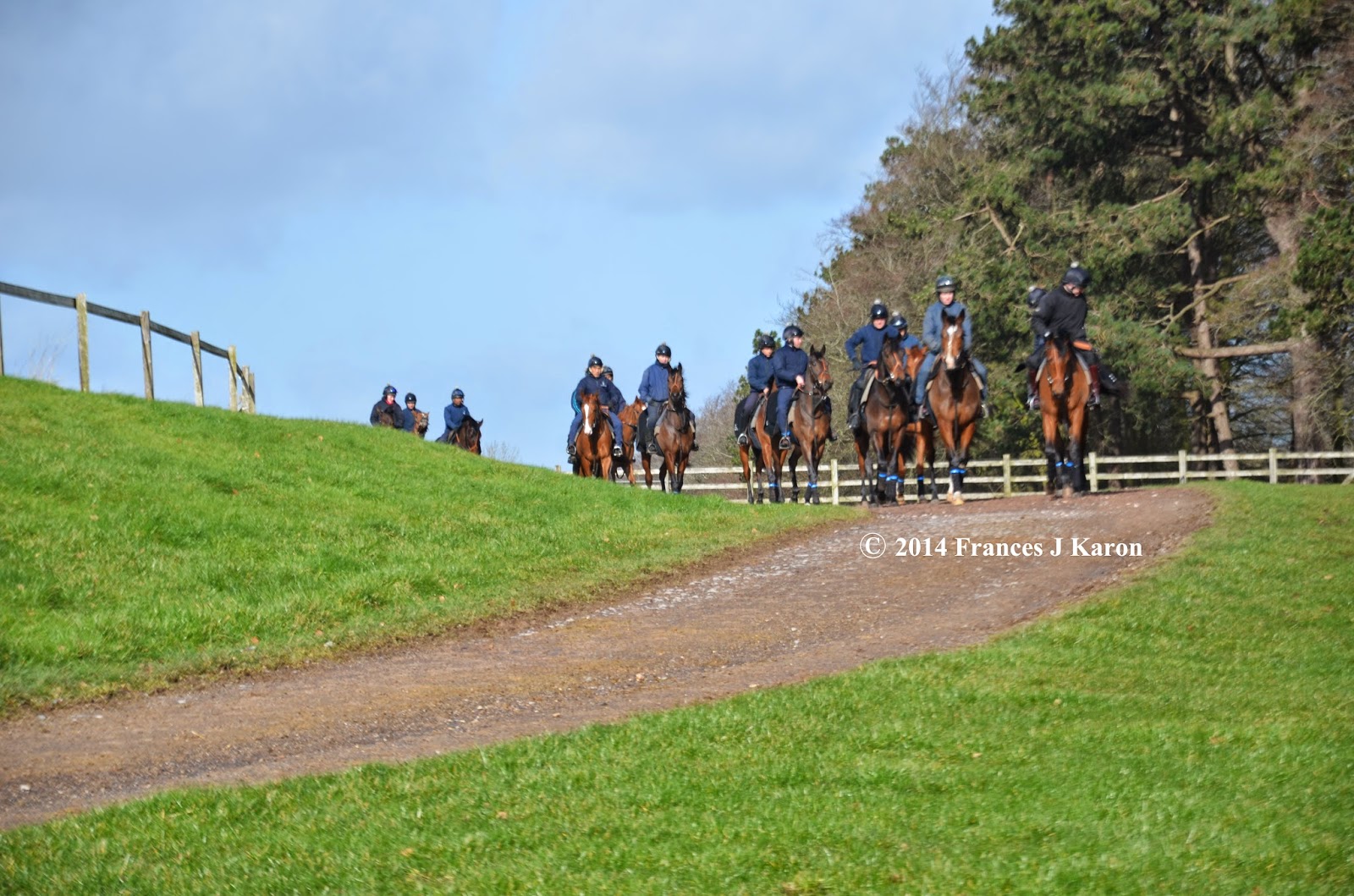 Manton has a long, storied past that includes many, many, many Classic winners since the 1870s and the murder of an apprentice by Tom Taylor, the son and brother of Manton trainers. Tony Lindsell writes about the training facility in our article “The History of Manton.” The opening spread is of Sir Alfred Munnings’ “Early Morning on Manton Downs,” a beautiful painting by one of the greatest equine artists of all time.

This excerpt from Lindsell’s feature is on George Todd, who was master of Manton from 1947 to 1967:

Todd put up with owners as a necessary evil and told them as little as possible. He preferred the letter to the telephone and would rarely even tell them whether a horse was running, let alone trying. Lord Howard de Walden described Oncidium as his horse behind the Iron Curtain.

One of Todd’s apprentices described his instructions. Most of the time they were “Drop it out,” he said. “I stopped horses for as long as two years. I stopped Tarquinian so many times I wondered, 'What day is this horse ever going to try?’”

In addition to these two features, the magazine has veterinary and nutrition articles, and plenty of other interesting stuff to read.

These photos from my Manton visit do not even begin to do it justice: 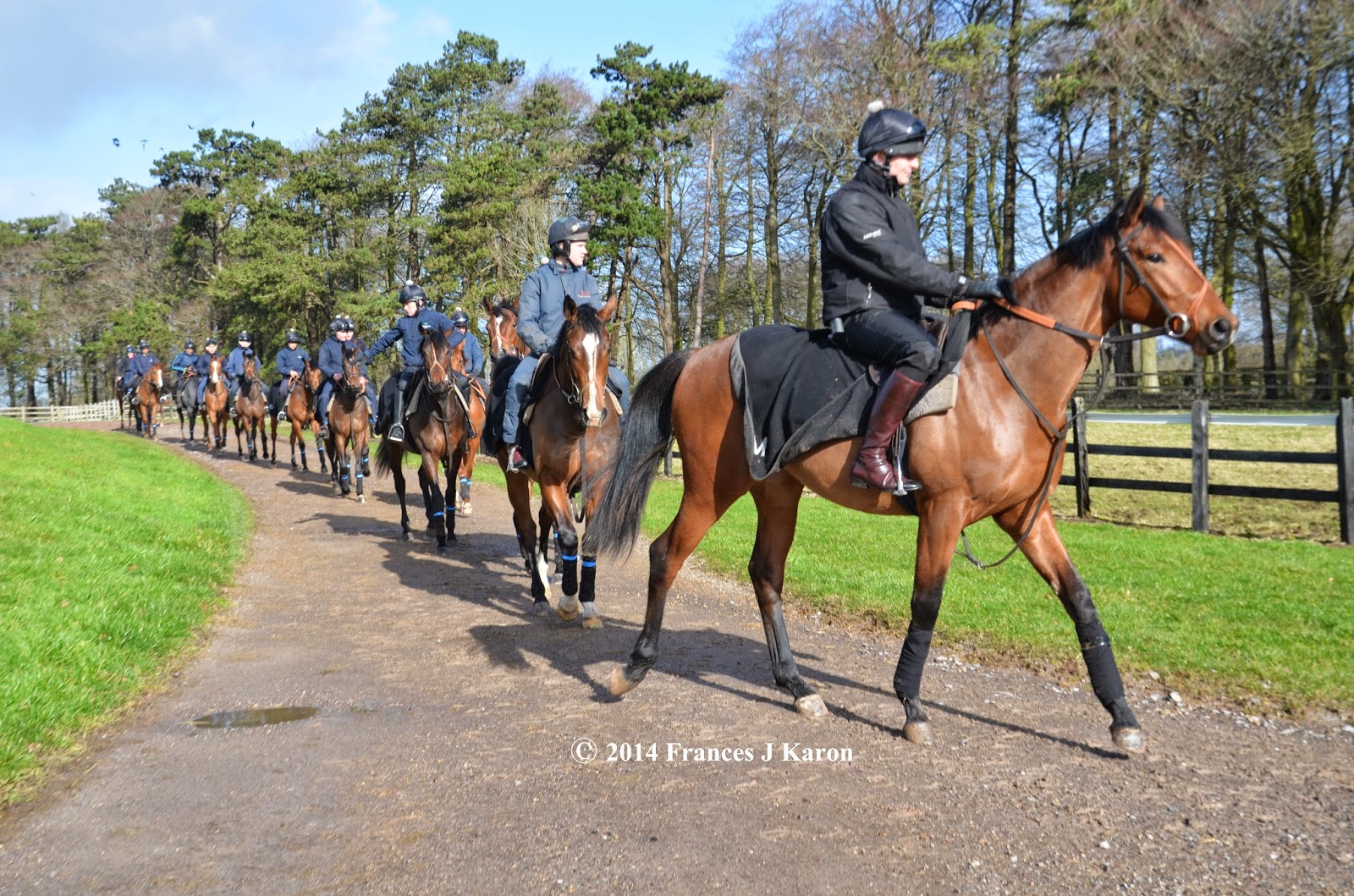 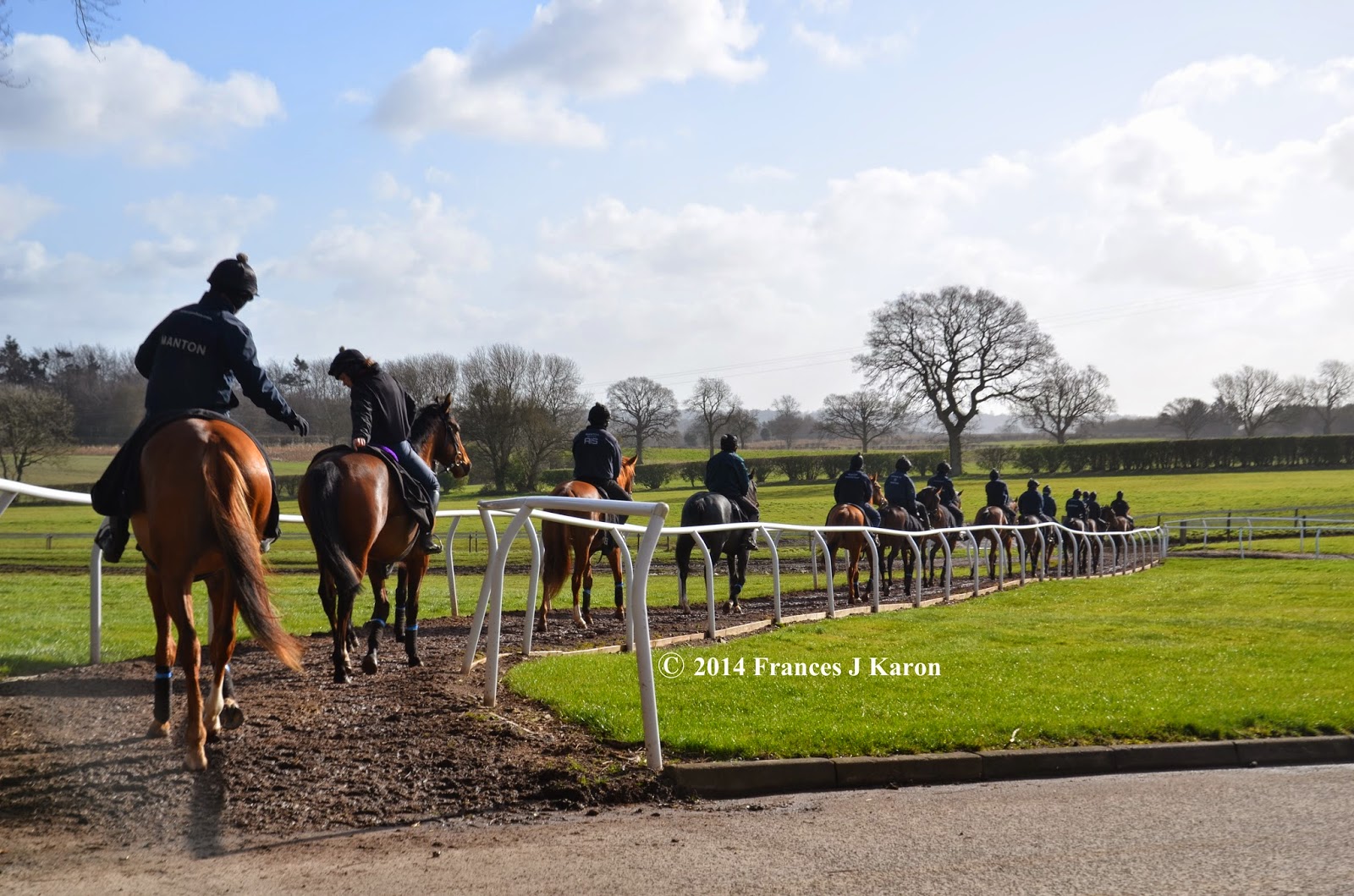 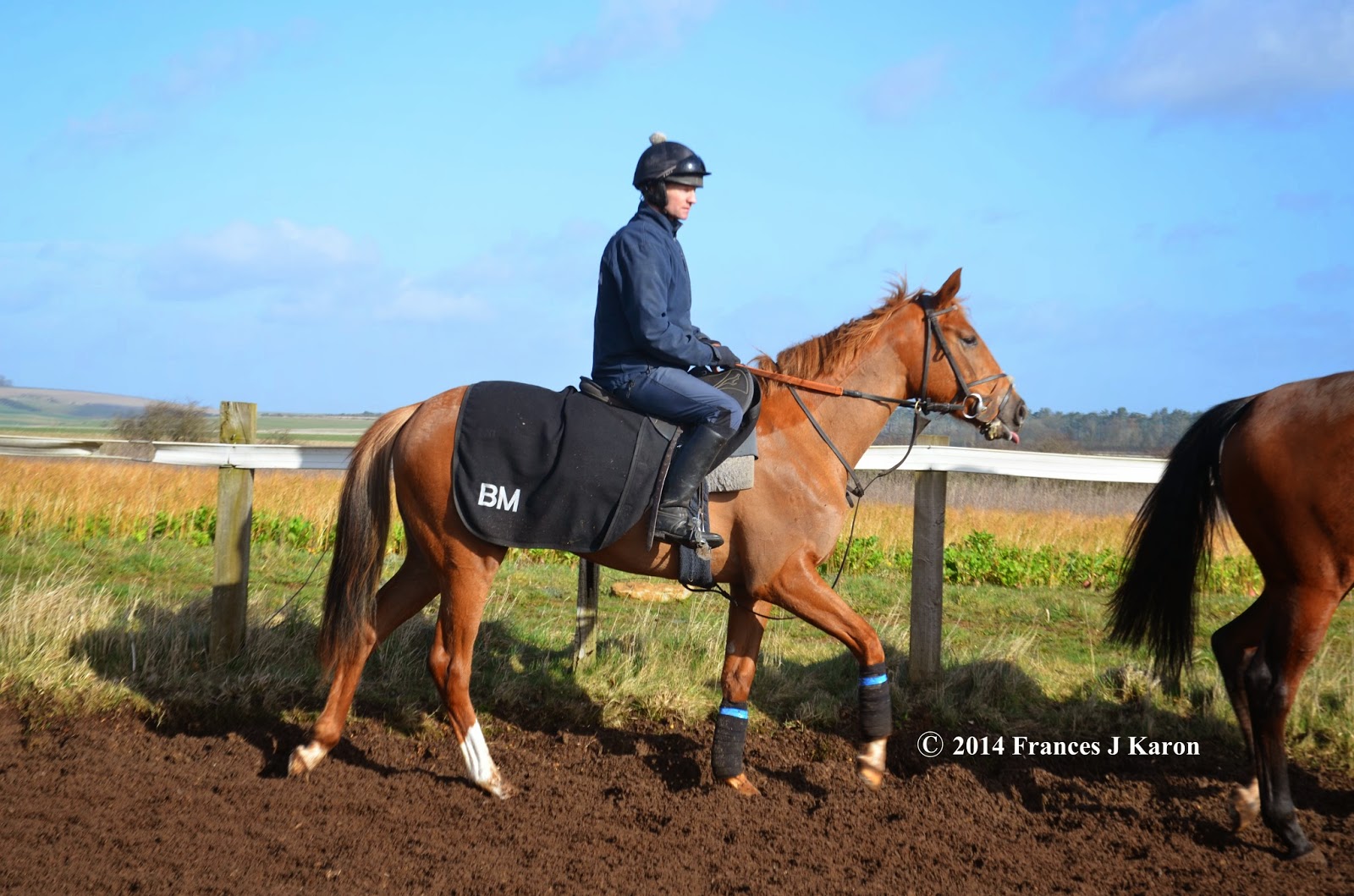 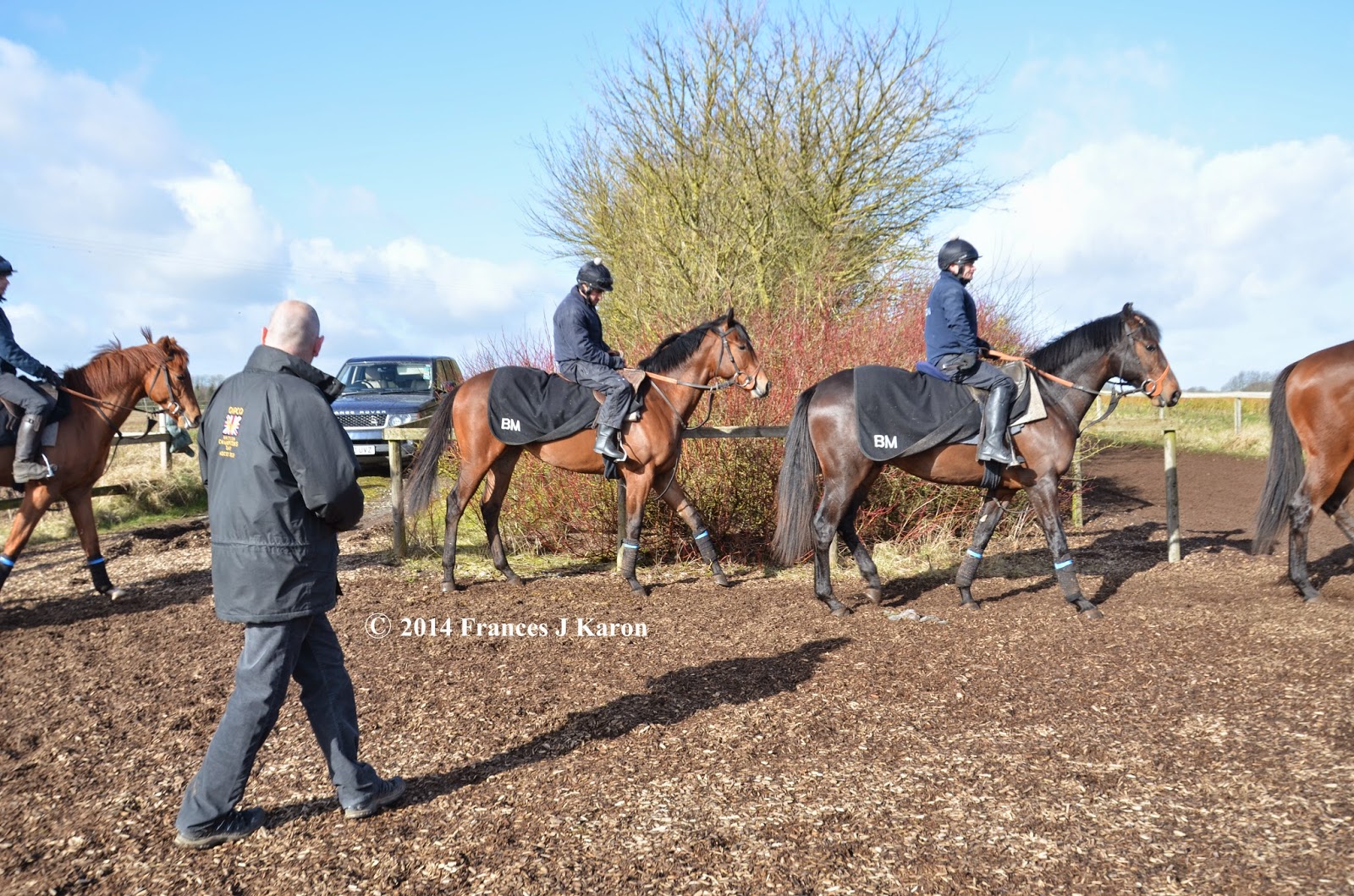 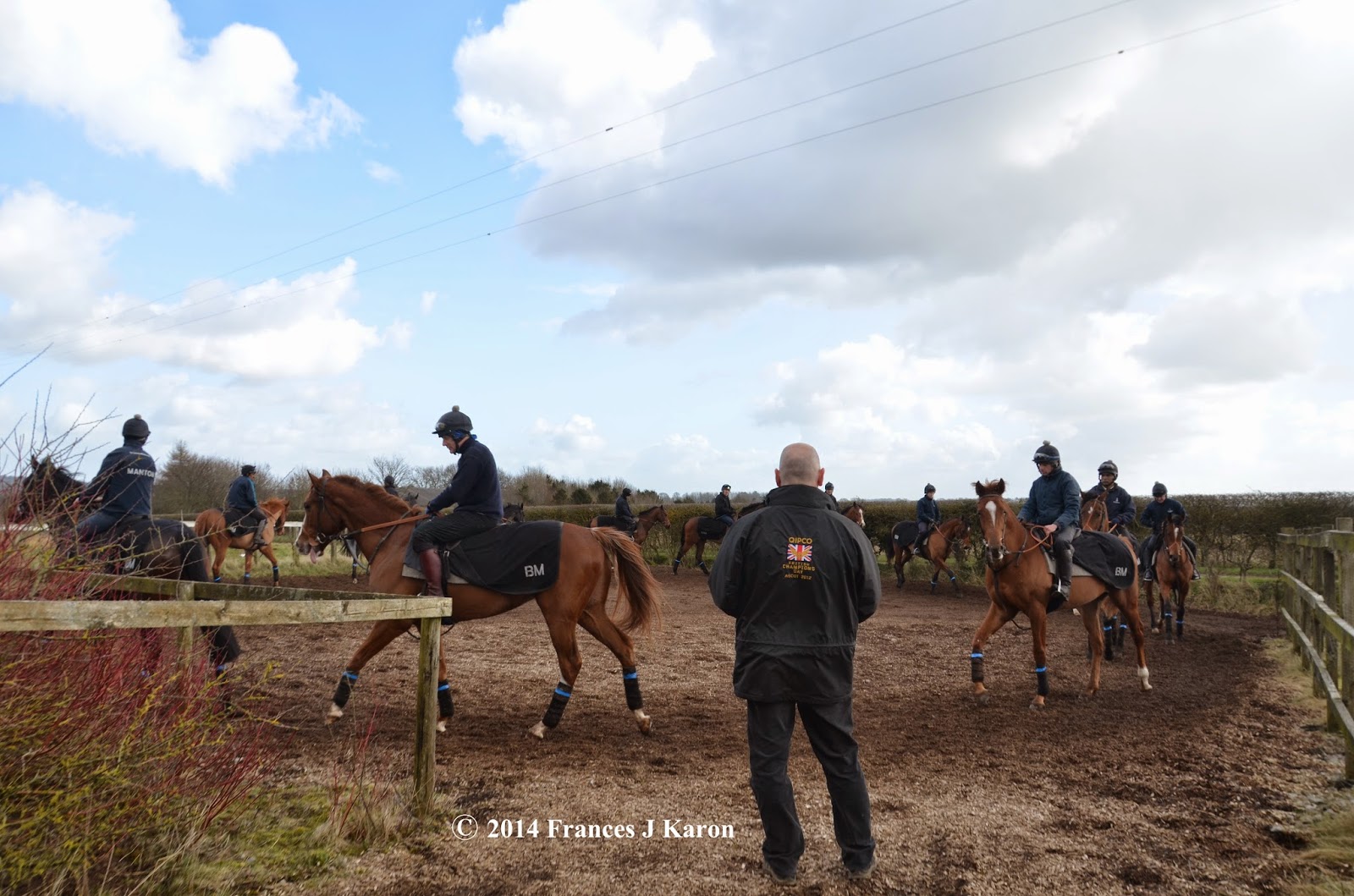 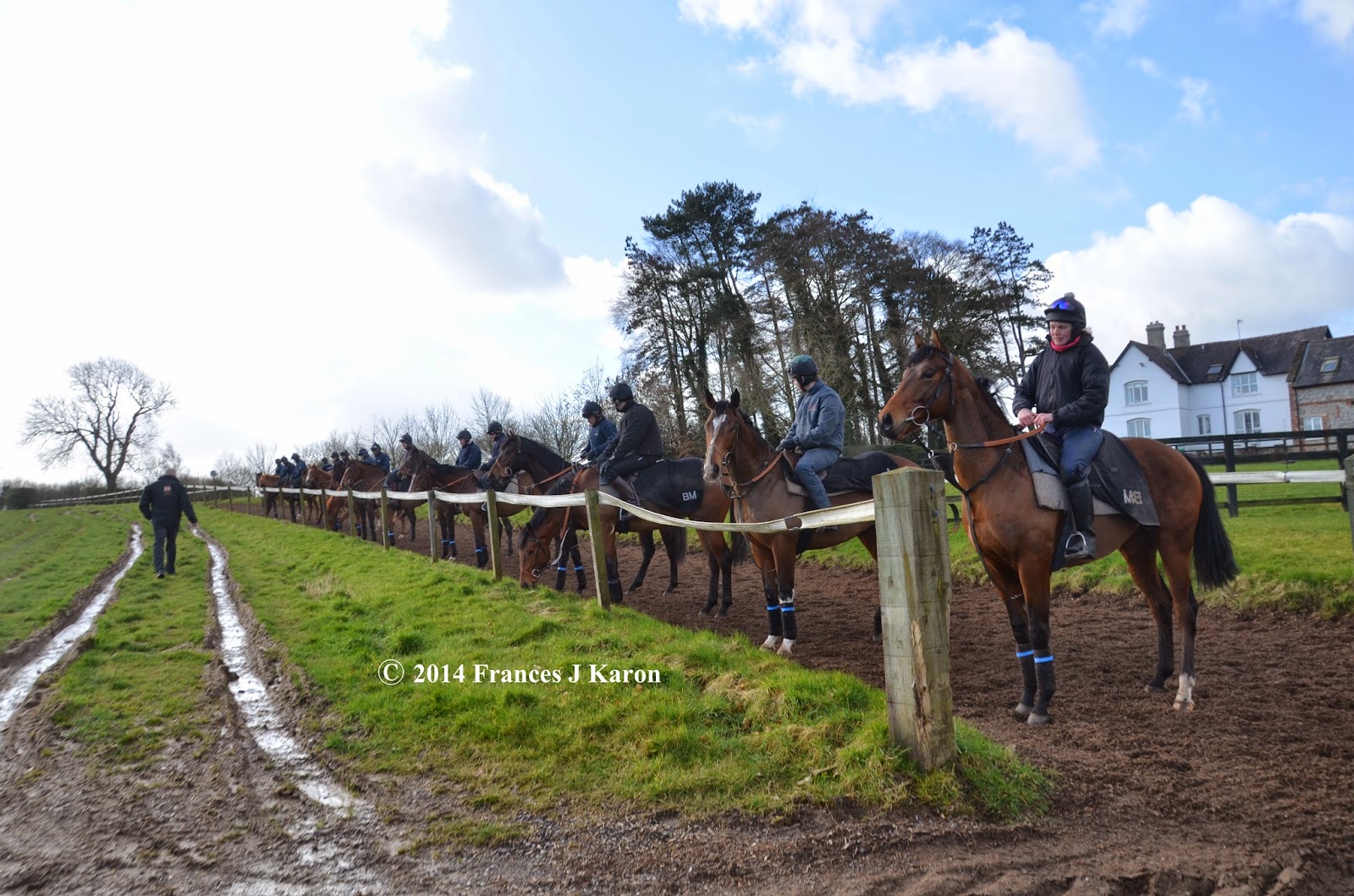 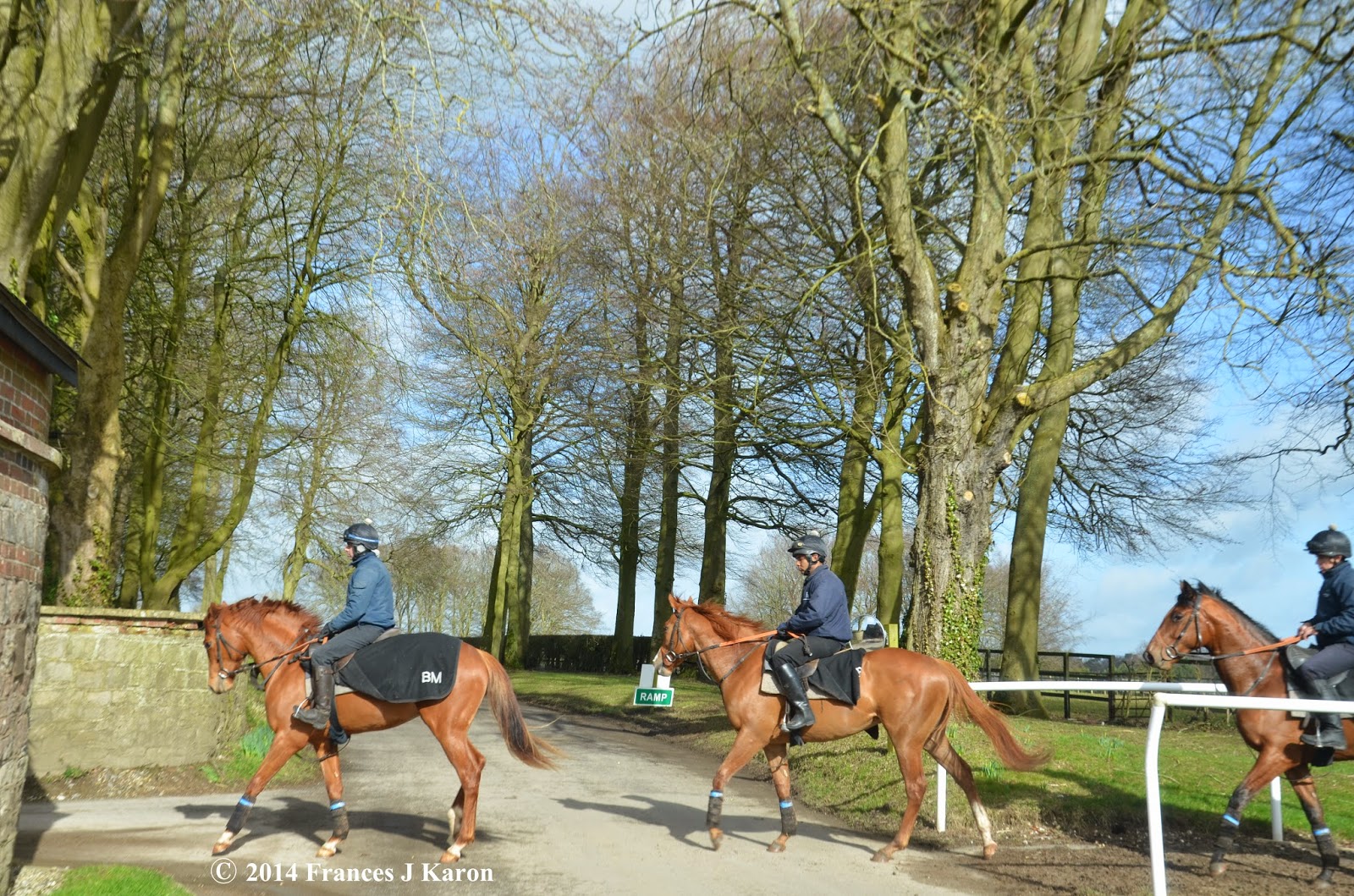 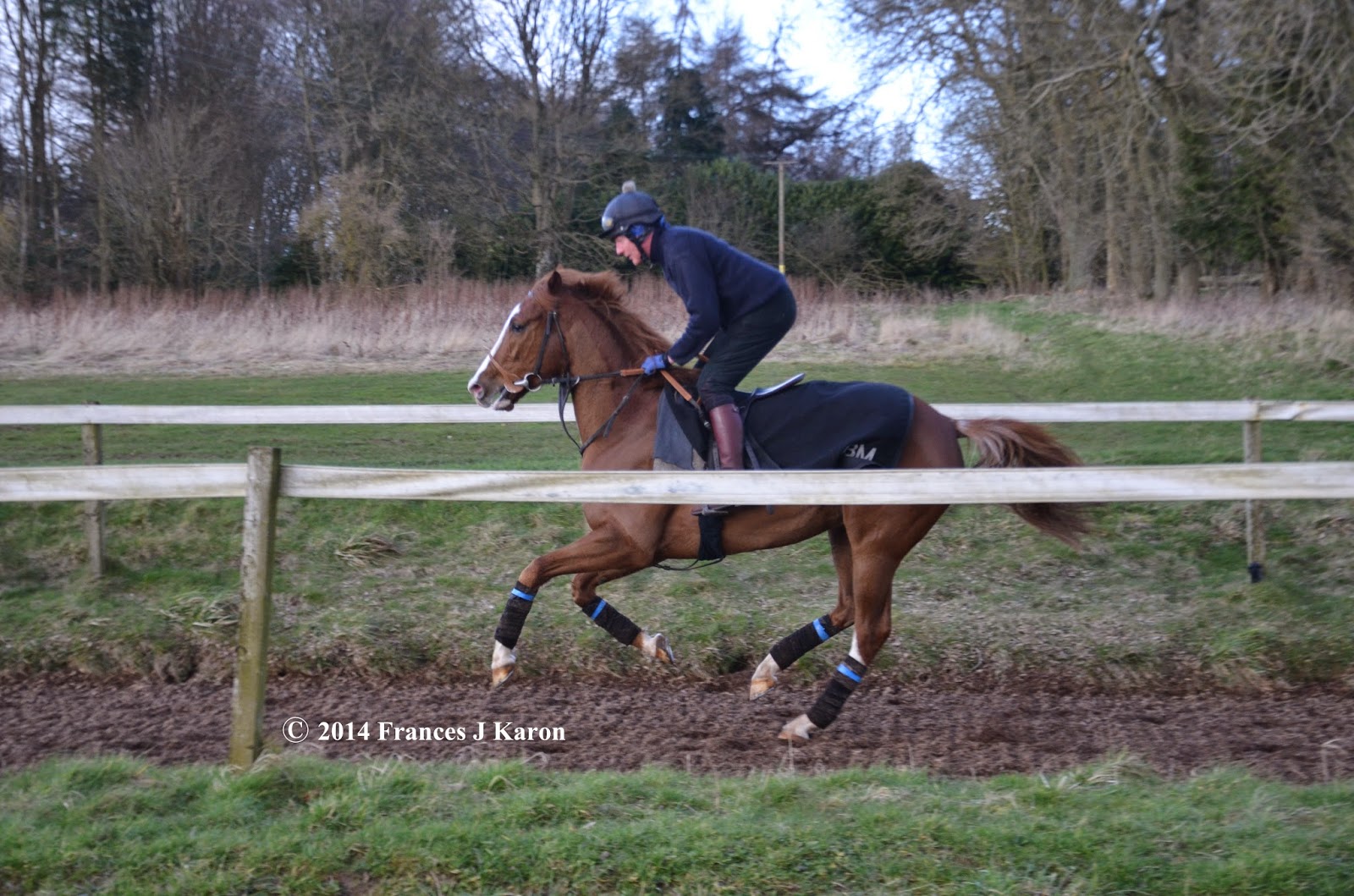 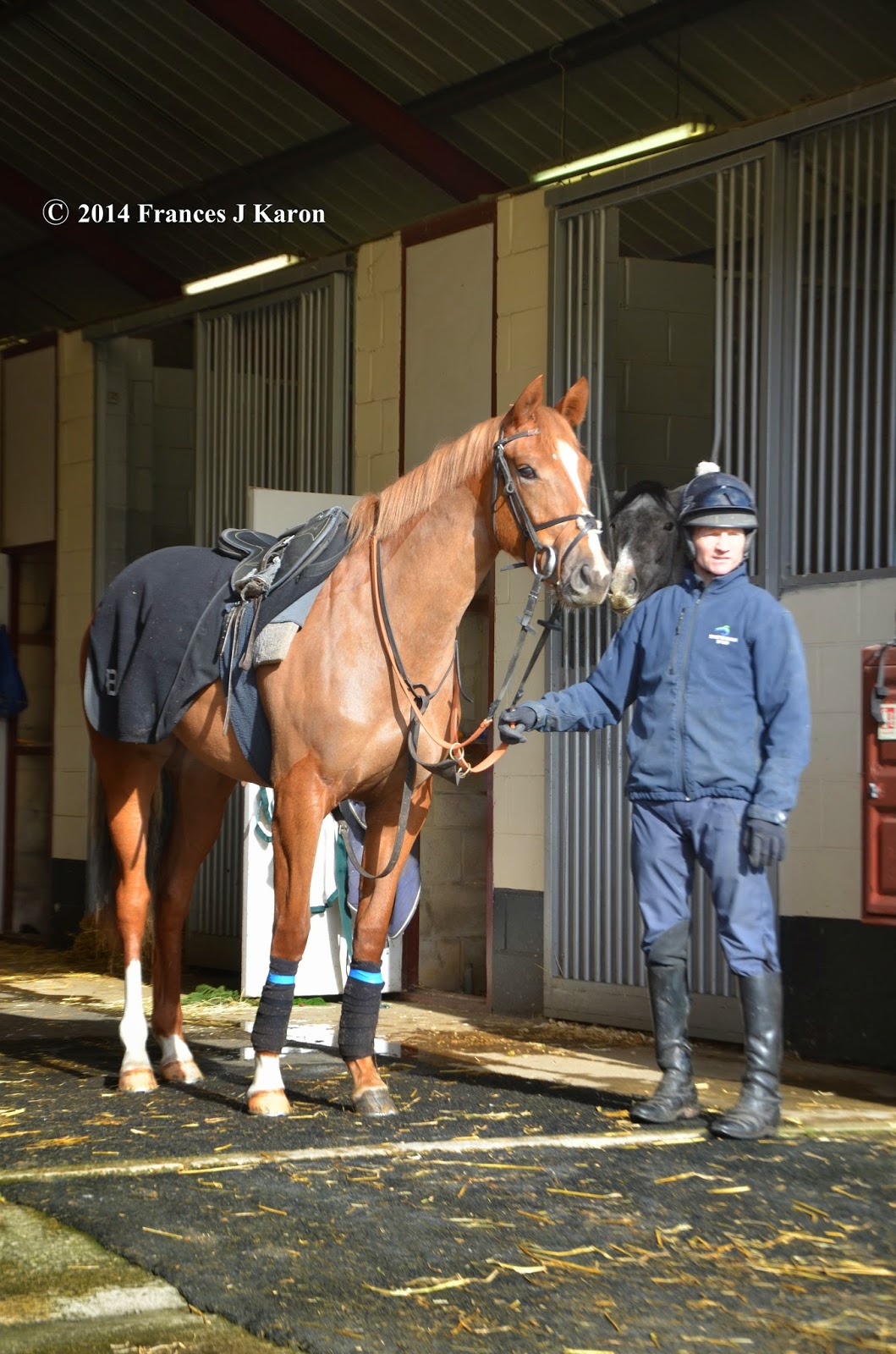 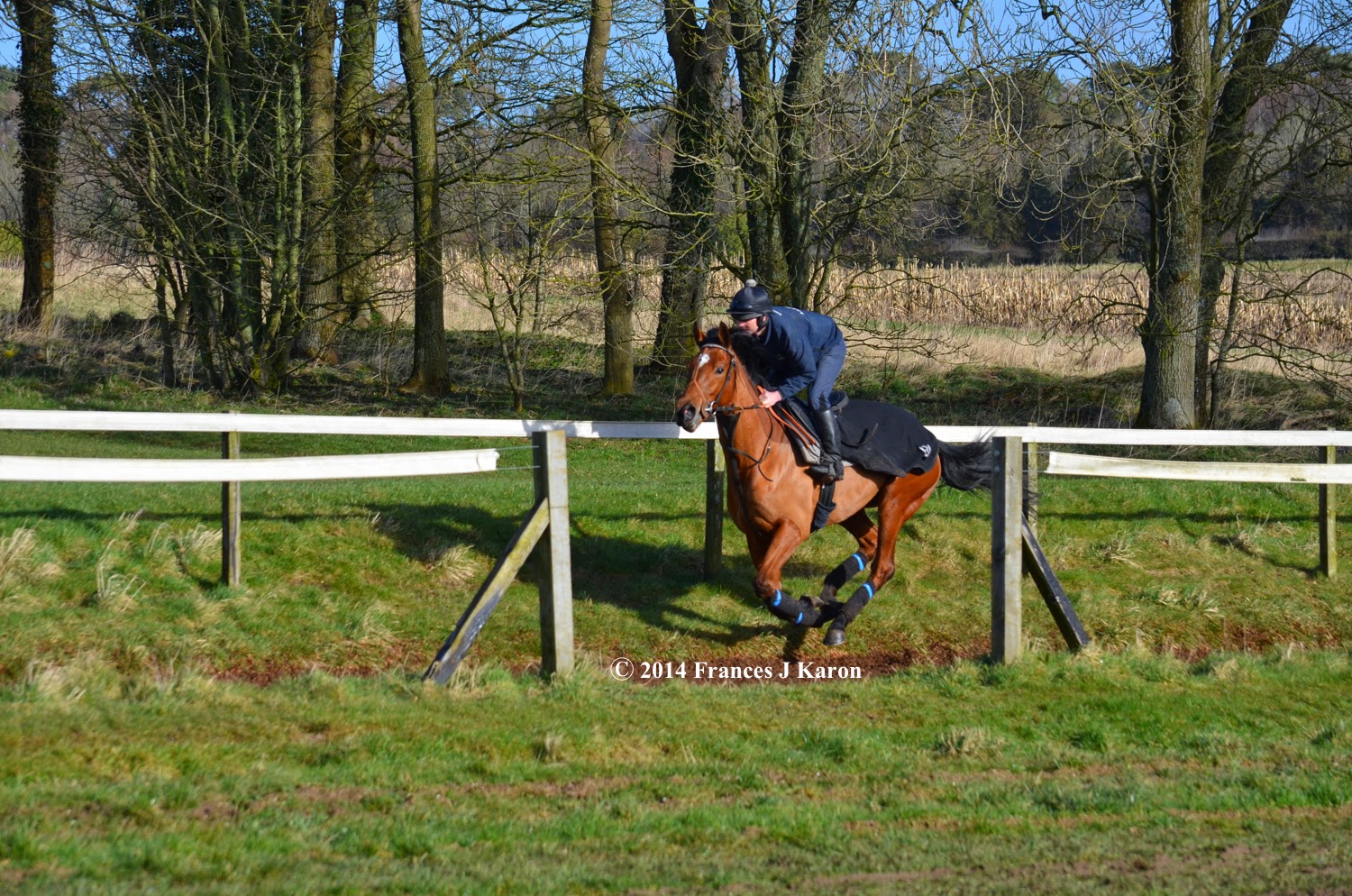 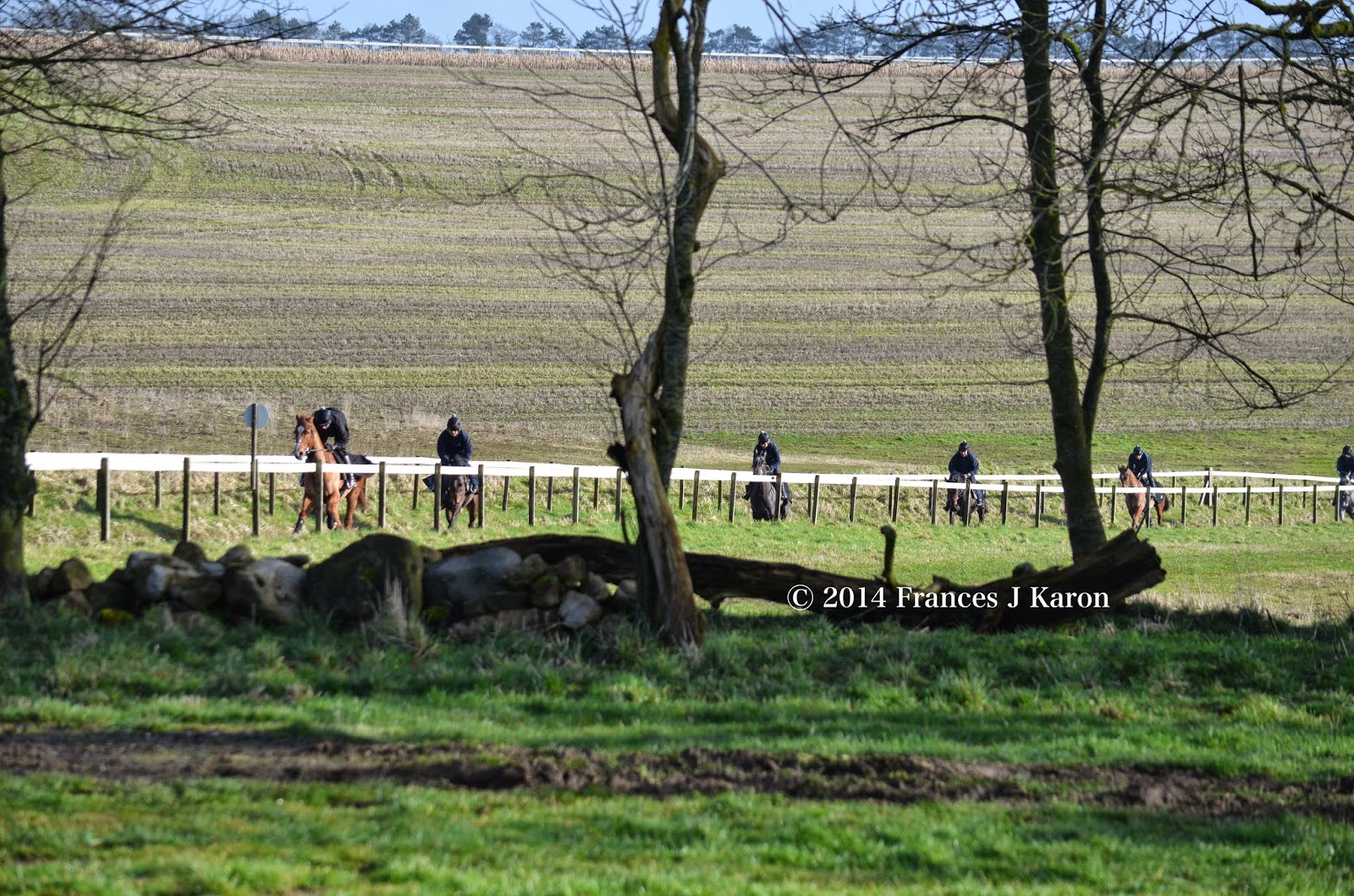 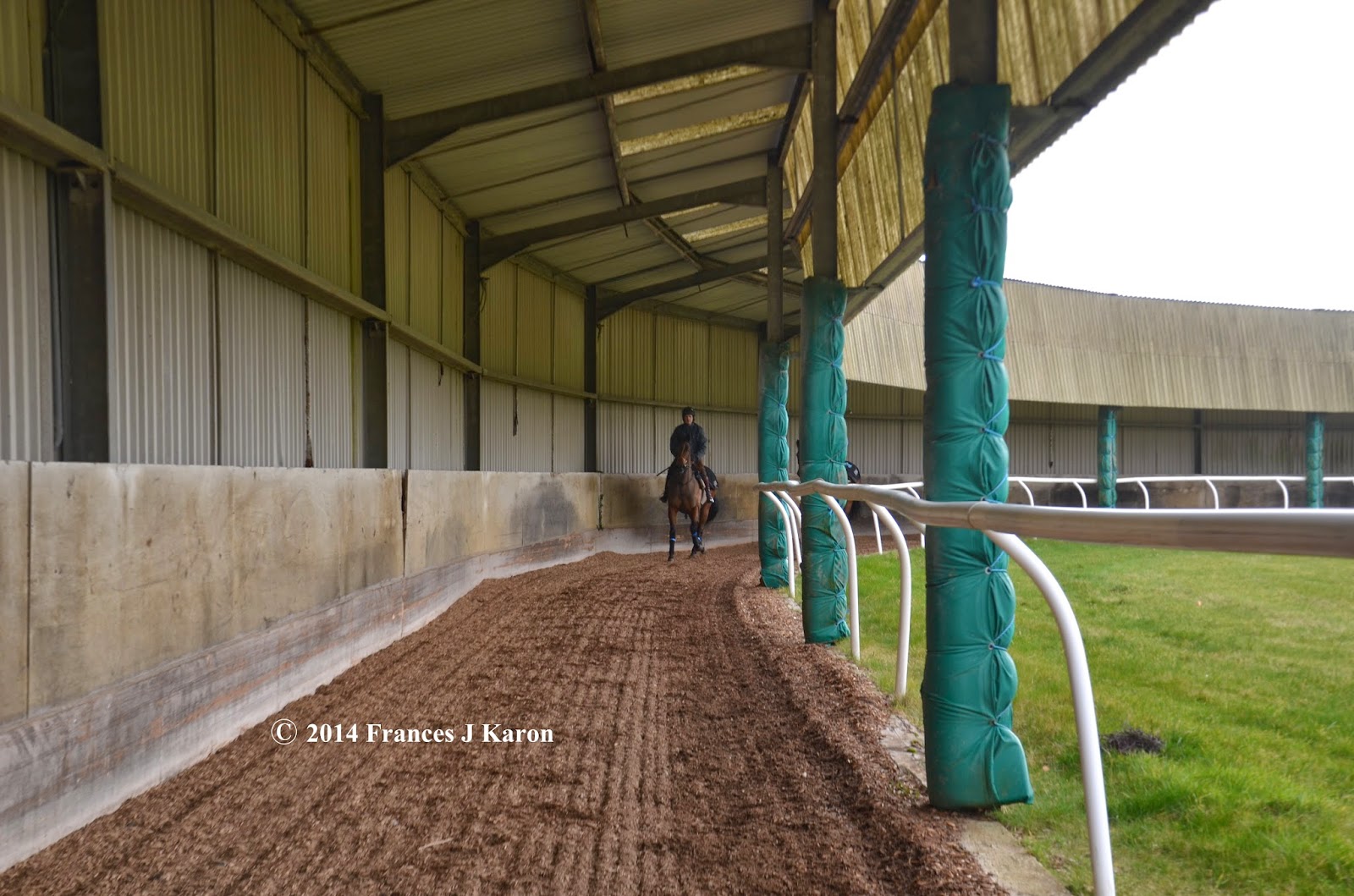 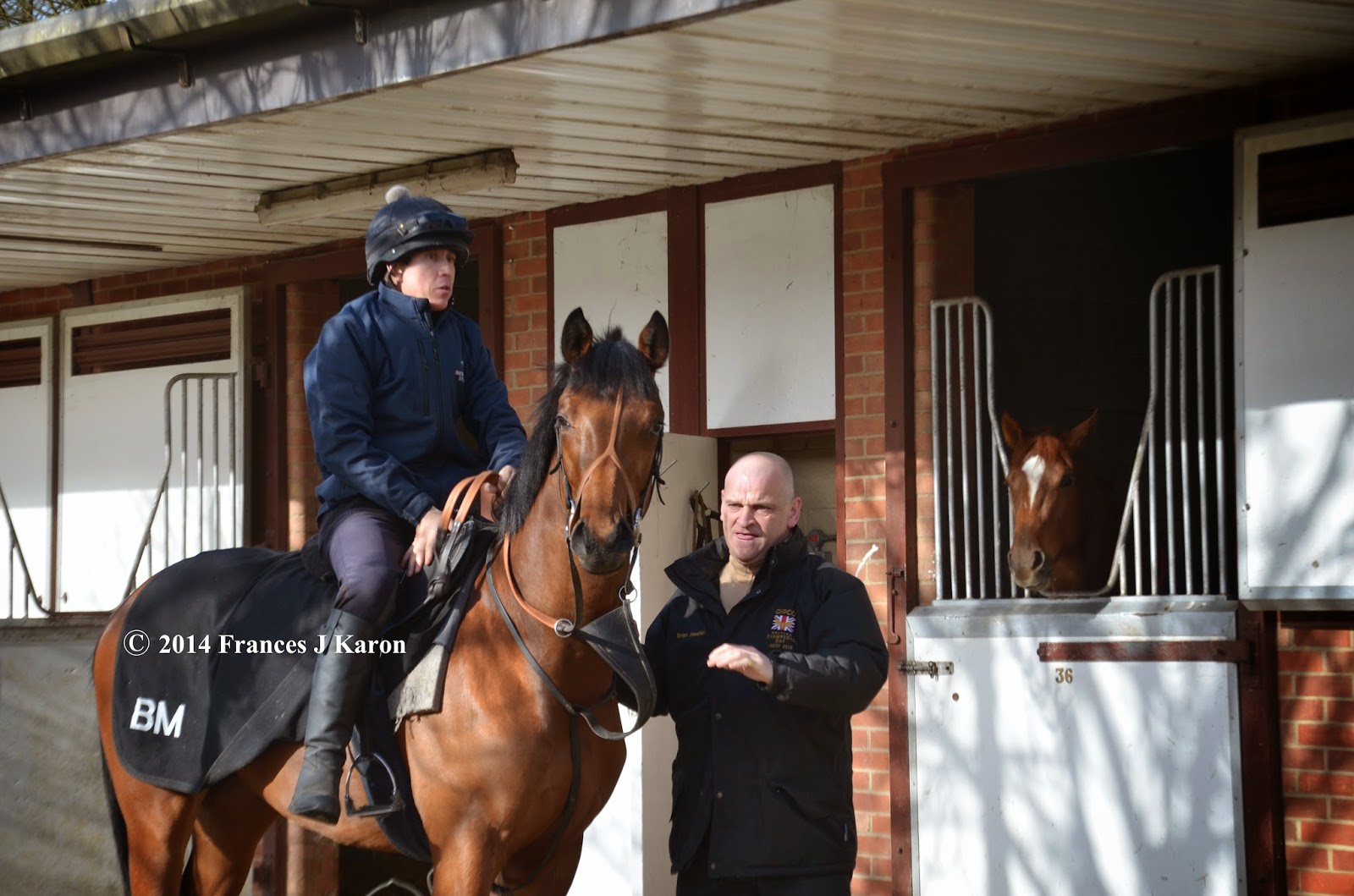 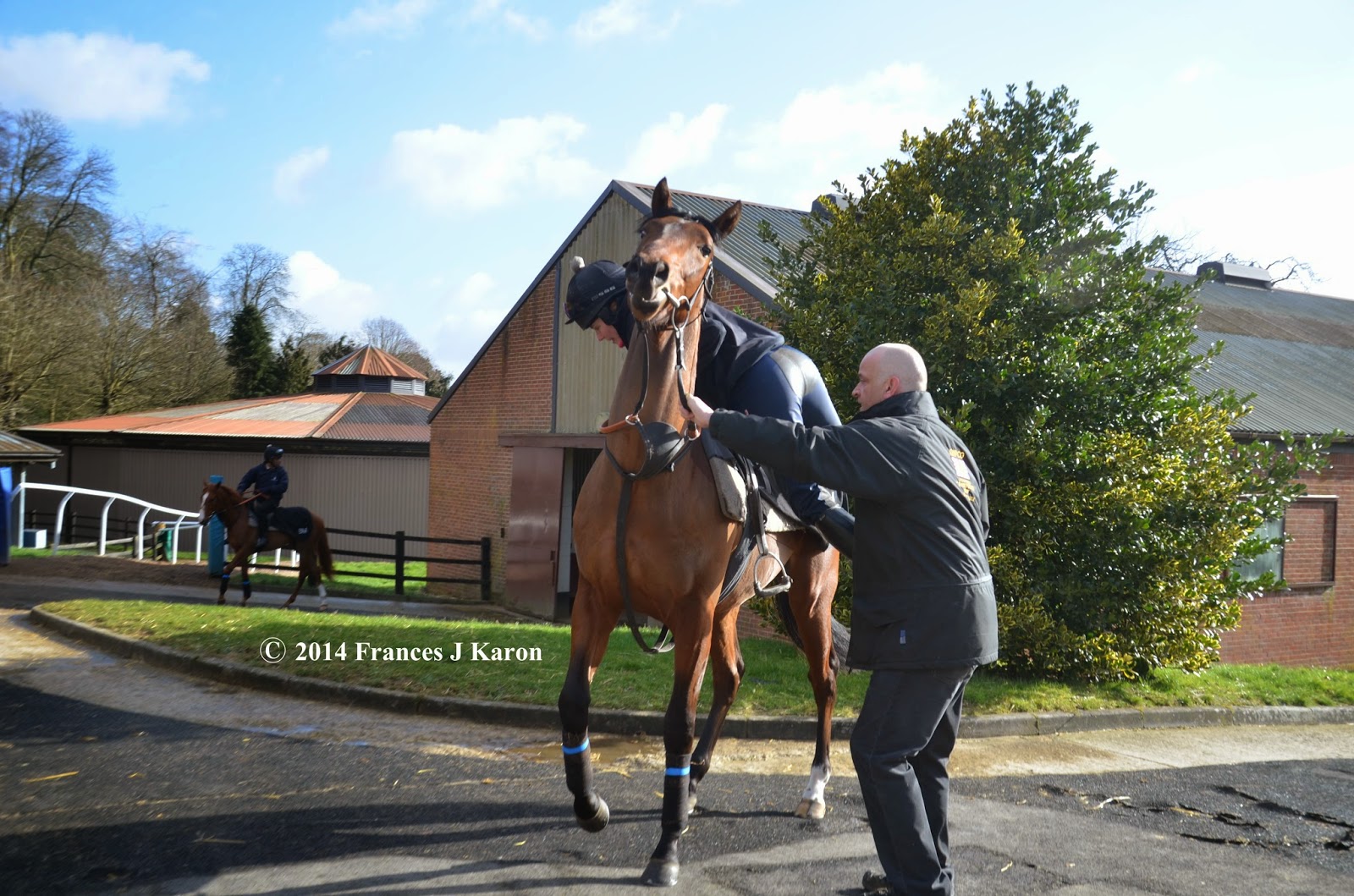 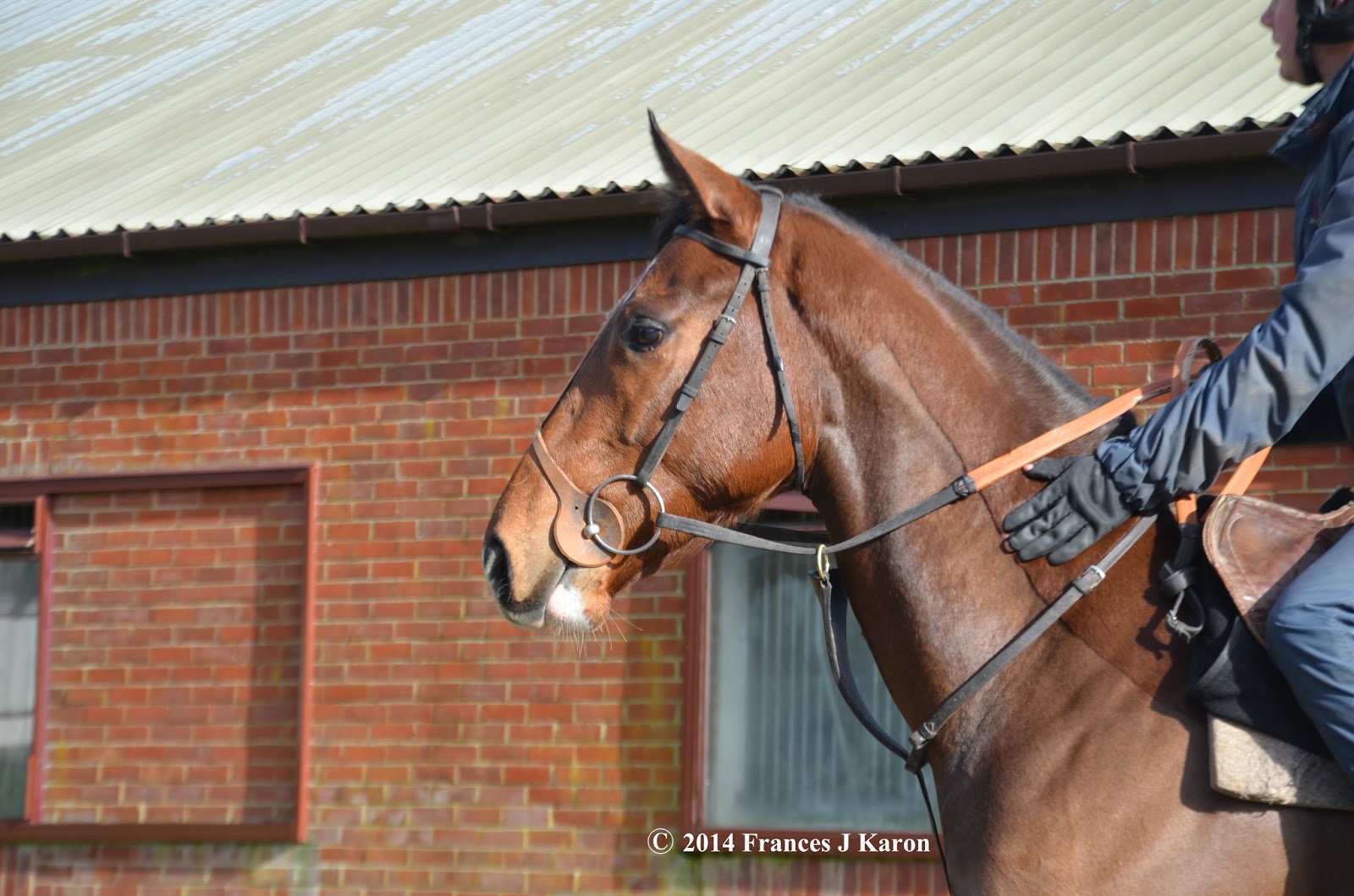 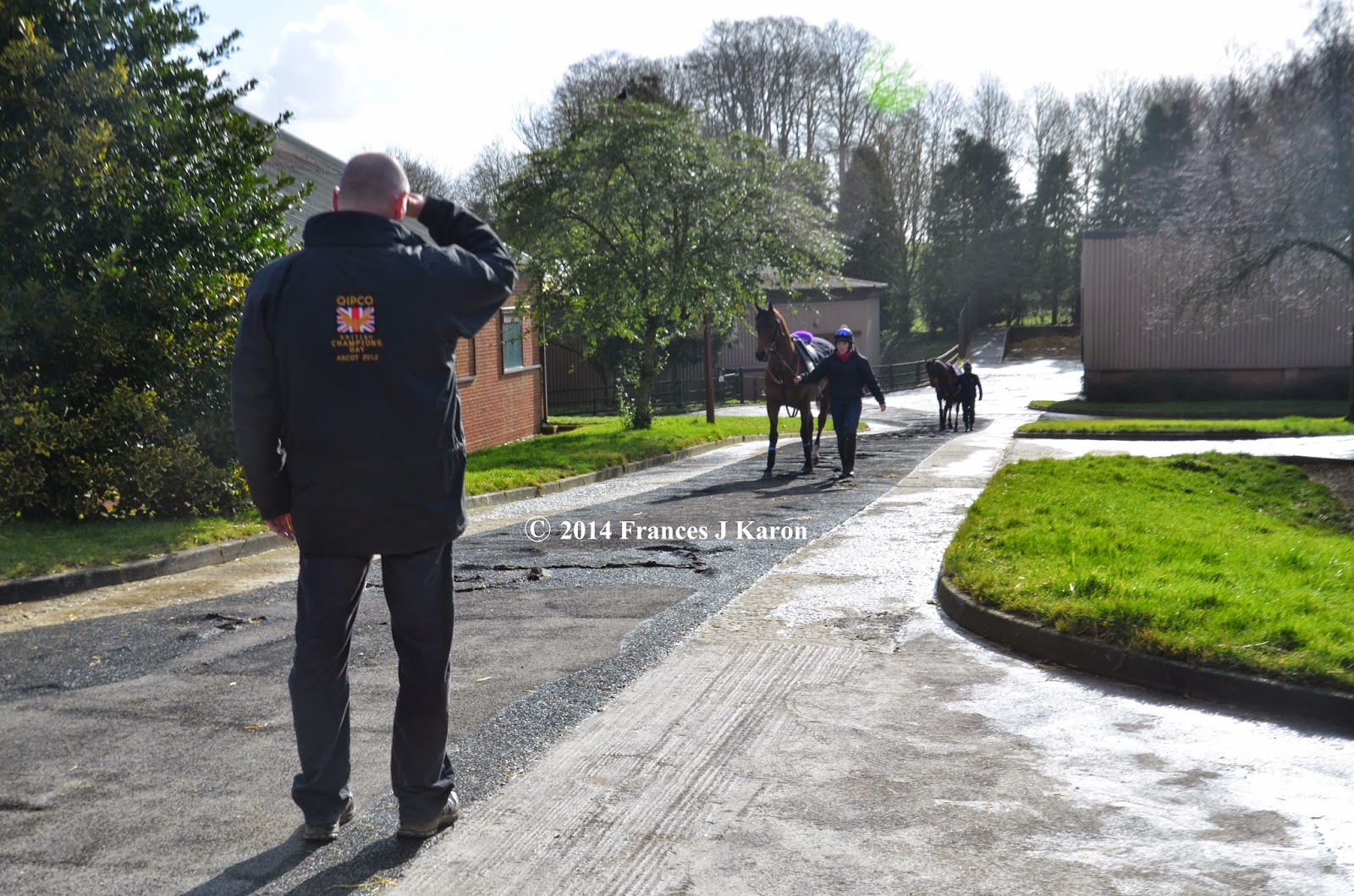 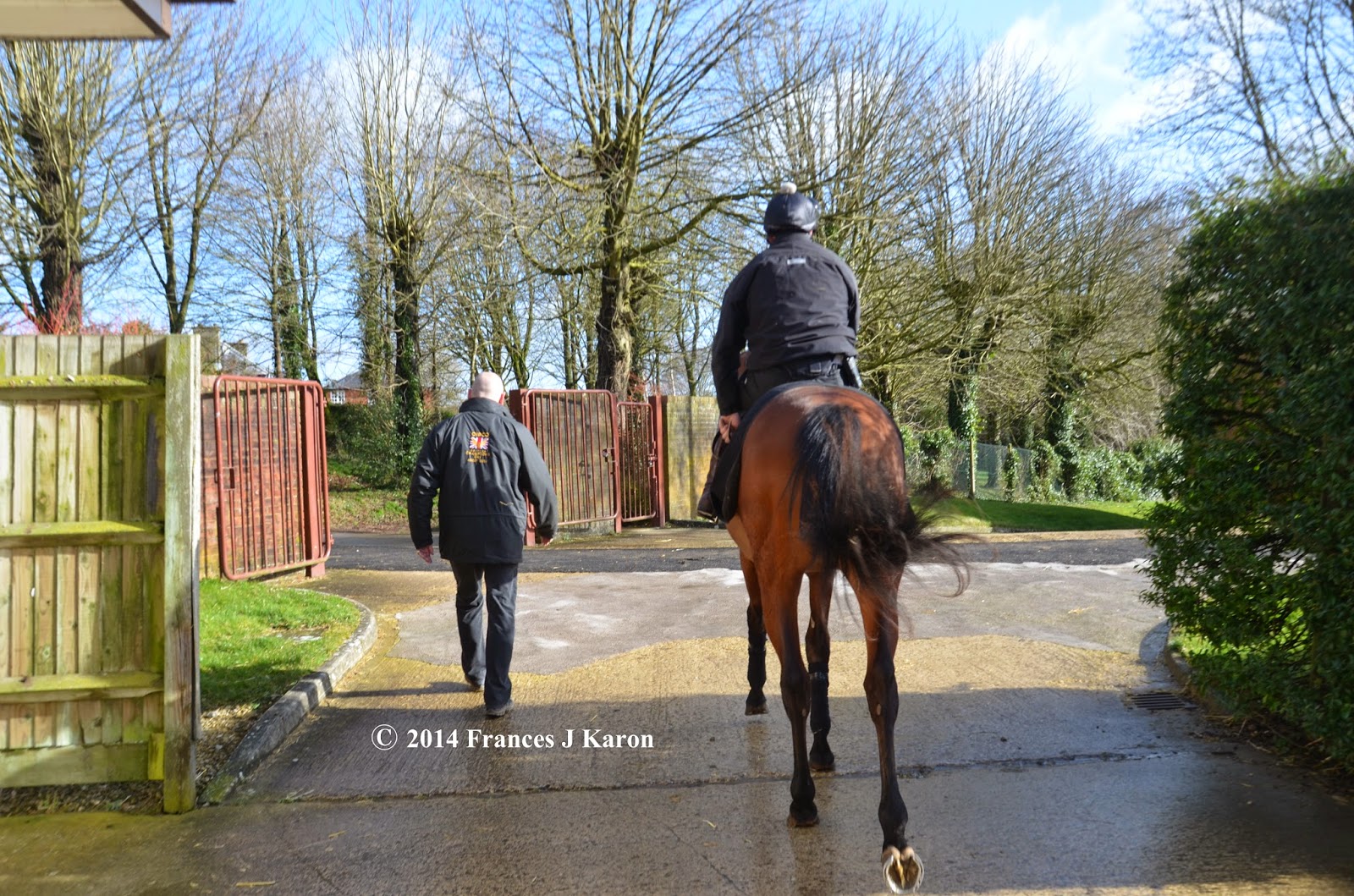 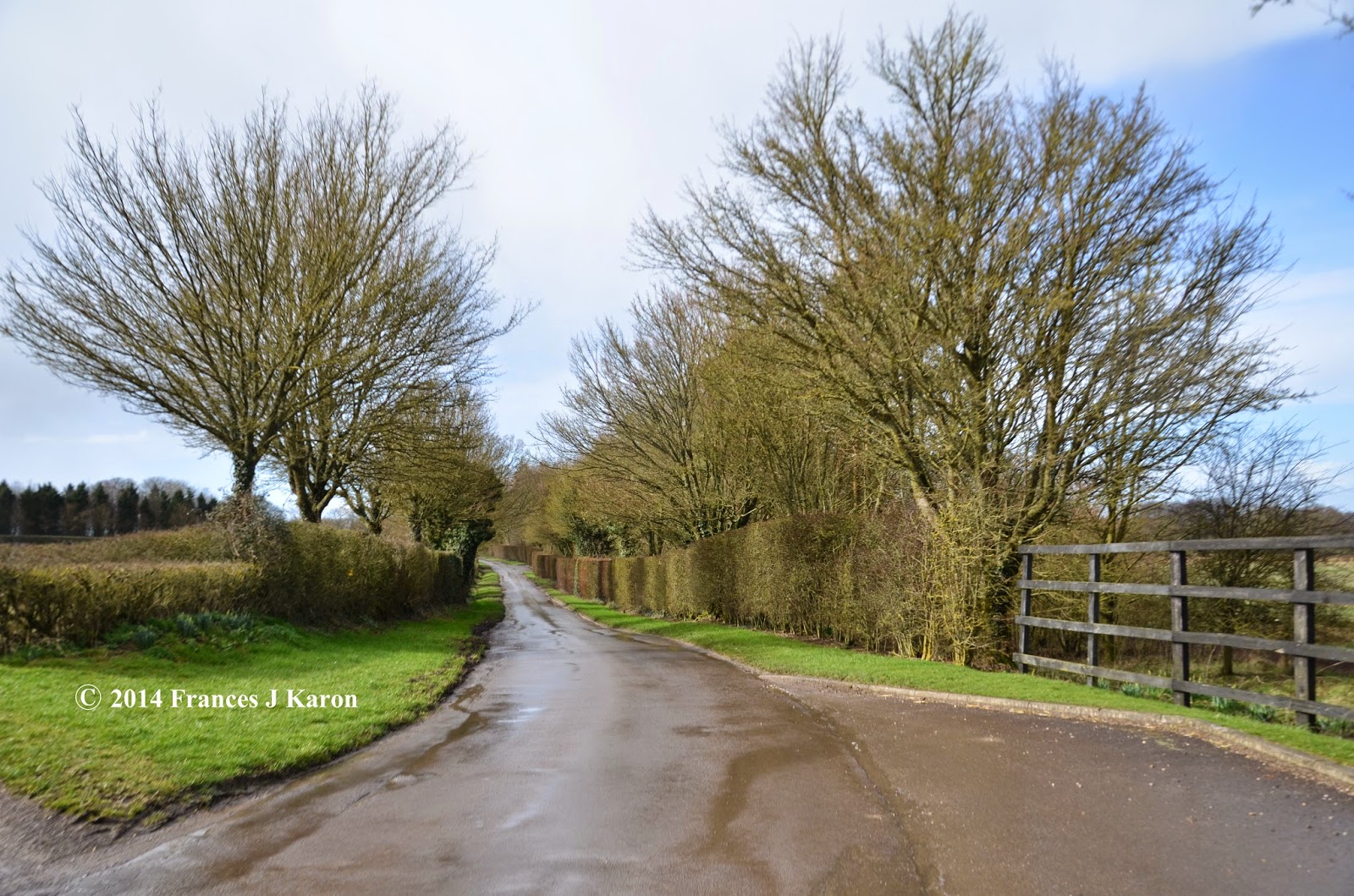 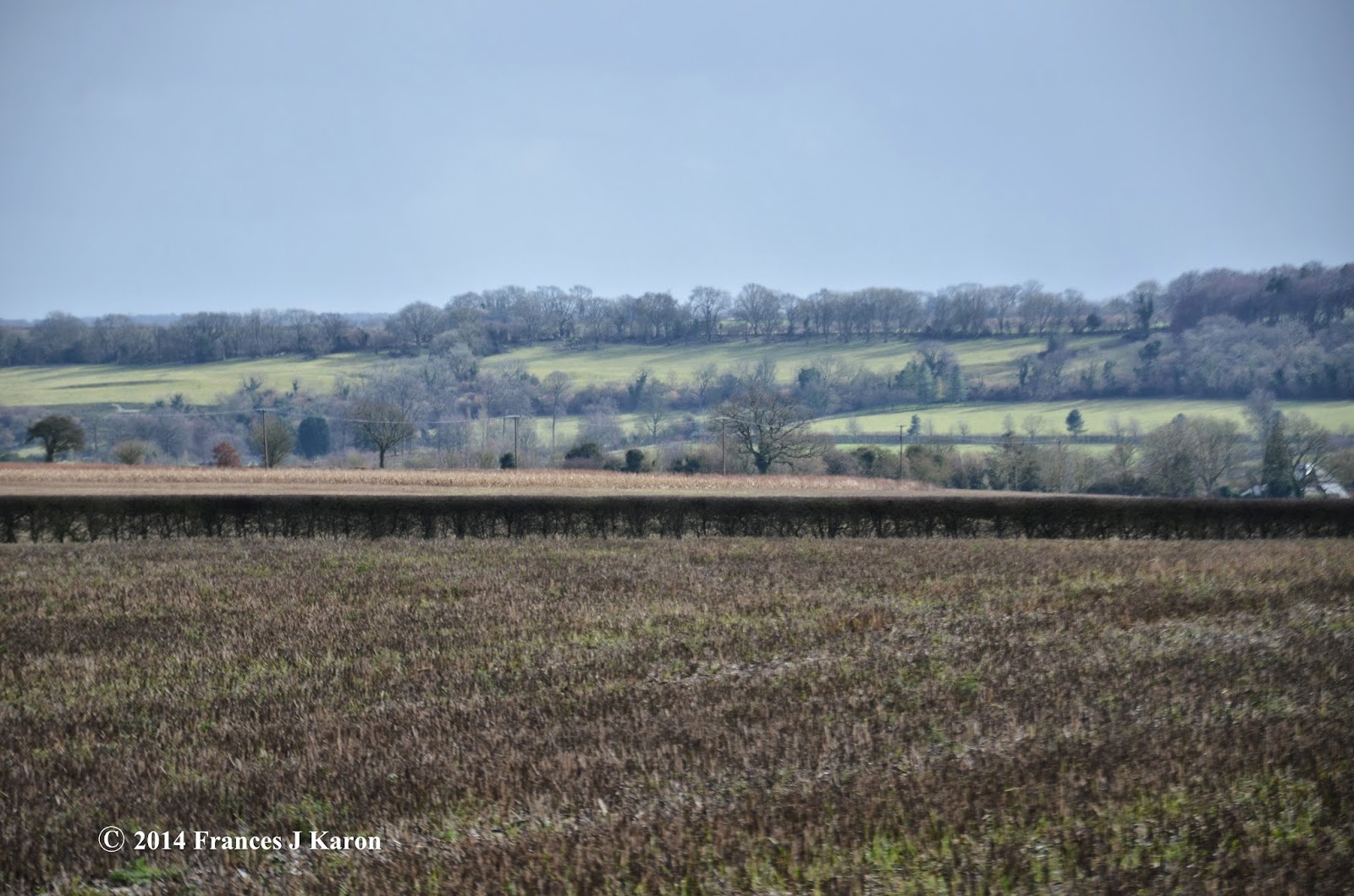 Posted by Frances J. Karon at 8:30 AM No comments:

News has come out of Argentina that 23-year-old stallion Mutakddim passed away reportedly of infirmities due to old age on March 26, 2014, where he stood at Haras La Quebrada.

A blue-blooded chestnut colt by Seeking the Gold out of Phipps-family cull Oscillate (by Seattle Slew), Mutakddim was bred in Kentucky by Deer Lawn Farm, Carloss & Lamont. Mutakddim was Oscillate’s first, and best, foal, although her 1992 Easy Goer filly Smooth Charmer would go on to become Grade 1-placed and another daughter produced Grade 1 winner Frost Giant. Oscillate, a winner, was a half-sister to 1989 champion two-year-old Rhythm; Grade 3 winner Get Lucky (dam of Girolamo-G1, Daydreaming-G2, and Accelerator-G3, and granddam of Kentucky Derby winner Super Saver); and stakes-placed/good sire Not for Love -- all of whom were by Mr. Prospector -- and to Grade 1-placed Offbeat (Fappiano). Their dam Dance Number won the Beldame S.-G1 and Shuvee H.-G2 in 1983, and was a half-sister to top sire Private Account (Damascus), out of champion Numbered Account (Buckpasser).

Shadwell Estate Co. purchased Mutakddim for $200,000 at the 1992 Keeneland July sale and sent him to England to be trained by John Gosden. He raced with moderate success, winning five of 17 starts, most notably the Listed John of Gaunt Stakes, and he placed in a Group 2 and three Group 3s.

Mutakddim, the sire of 108 black-type winners, stood at Hill ’n’ Dale in Kentucky for $5,000 upon his retirement. He shuttled to Haras La Quebrada for Southern Hemisphere duty throughout most of his career before staying at La Quebrada the last few years of his life. He covered 25 mares in 2011, resulting in 19 live foals that are currently two-year-olds, from his final season in the U.S.

At stud, Mutakddim became a very important sire, primarily in South America: Unofficially, roughly 46 of his 51 Graded or Group stakes winners were South American-breds who won their major races in Argentina or other South American countries. His biggest horses in the U.S. were Lady Tak-G1,  Jazzy-G2, Breath of Love-G3, Hattiesburg-G3, and Ravalo-G3, and he also sired Nyuk Nyuk Nyuk, a stakes-winning gelding with 18 wins and over $813,000 to his credit.

He crossed very well with another La Quebrada legend, Southern Halo, siring 21 Graded stakes winners out of mares by that sire. Overall, Mutakddim sired 108 stakes winners, and he will undoubtedly be missed in the South American breeding community. He bred 76 mares in 2013, per the La Nacion notice linked above.
Posted by Frances J. Karon at 10:07 PM No comments:

Email ThisBlogThis!Share to TwitterShare to FacebookShare to Pinterest
Labels: Mutakddim

In winning yesterday’s Pasadena Stakes at Santa Anita Park, Glen Hill Farm’s homebred colt Enterprising has reinforced his position as a top three-year-old turf horse in the country. He is undefeated in three starts on the surface, with wins in two Listed stakes races at Santa Anita: the Eddie Logan at two and now the Pasadena. From his other starts, he is multiple stakes-placed this year on the all-weather surface at Golden Gate, placing second in the California Derby and third in the Grade 3 El Camino Real Derby. Enterprising has only finished off the board in his debut, which was on the dirt at Santa Anita in October. A bay colt by Elusive Quality out of Indy Blaze, by A.P. Indy, Enterprising has a great pedigree for turf.

Fittingly, Enterprising broke his maiden at Hollywood Park, just a month before the historic track closed for good. Hollywood Park was owned by R.D. Hubbard throughout the bulk of the 1990s, and with partners Ed Allred and Ed Sczesny, Hubbard raced a wonderful turf mare, Fire the Groom, who won the 1991 Wilshire Handicap-G2 at Hollywood.

Bred by Edward Seltzer and John Calicchio, Fire the Groom was a 1987-foaled, dark bay or brown daughter of Blushing Groom and Prospector’s Fire (by Mr. Prospector), and a half-sister to Group 1 winner Dowsing (Riverman). Her breeders sent her through the 1988 Keeneland July sale, where they bought her back for $185,000 and, at some stage, sold her privately to Dick Duchossois, the owner of Arlington Park.

Sent to Luca Cumani in England, Fire the Groom made her first seven starts in that country, culminating with a win in the Moss Brothers October Stakes at Ascot in 1990. Hubbard and partners had bought her for a reported $150,000 in the fall, and three weeks after the October Stakes, she made her first U.S. start a winning one in the one-mile Aqueduct Budweiser Breeders’ Cup Handicap, her final start at three.

At four, Fire the Groom was based in California and trained by retired Hall of Fame jockey Bill Shoemaker. Her win in the Santa Anita Budweiser Breeders’ Cup Handicap-G3 under Gary Stevens was an emotional one, coming six days after the car accident left Shoemaker paralyzed from the neck down. In the Los Angeles Times race recap, writer Bob Mieszerski reported that Shoemaker had winked at his assistant Paddy Gallagher that morning at mention of Fire the Groom’s name. (You can read the full article here.)

Fire the Groom then made three successive starts at Hubbard’s Hollywood, winning the Wilshire Handicap; running third in the Gamely-G1, won by Miss Josh; and with a second to stablemate Alcando in the Grade 1 Beverly Hills Handicap. In her next race, Fire the Groom earned her most important win, in the 1 3/16-mile Beverly D. Stakes-G1 at Arlington.

Although her lone Grade 1 was Fire the Groom’s final win, she raced admirably in her remaining starts, running fourth in the CIGA Prix de l’Opera-G2 at Longchamp in France, third in the Grade 1 Yellow Ribbon Stakes (winner: Kostroma), and second in the Grade 1 Matriarch Stakes won by future (in 1992 and 1993) champion female mare Flawlessly.

Fire the Groom retired to the breeding shed at the end of the 1991 season, having earned a converted total of over $775,000, with a record of 8 wins, 2 seconds, and 2 thirds from 16 starts, all on grass. Her first two years of breeding yielded a dead foal by Nureyev in 1993 and a barren year (to Nureyev) in 1994, before producing her first live foal, the unraced Deputy Minister filly Racemedowntheaisle, in 1995.

The third attempt to get a Nureyev foal out of Fire the Groom was successful, with the Group 1-winning colt Stravinsky foaled in 1996. A highweighted sprinter in Europe, Stravinsky won the Darley July Cup at Newmarket and York’s Nunthorpe Stakes -- both Group 1s -- in 1999. After retiring to Ashford Stud in Kentucky with Southern Hemisphere duty in New Zealand and having a stint in Japan, he is now permanently based at Cambridge Stud in New Zealand. To date, he has sired eight Grade 1/Group 1 winners and is broodmare sire of half that many.

Other black-type foals, all of whom raced in Europe, followed: Listed winner Moscow Ballet, a 2001 colt by Sadler’s Wells who placed third in the Secretariat Stakes-G1; Group 3-placed Sweet Firebird, a 2002 filly by Sadler’s Wells; and Group 3-placed Augustusthestrong, a 2006 son of A.P. Indy. Fire the Groom is also the dam of Gentlemen’s Club -- a gelding by Hubbard’s multiple Grade 1 winner Gentlemen -- who had 9 wins in the U.S., earning $172,000.

Indy Blaze, a year-younger full sister to Augustusthestrong, was a $975,000 Keeneland September sale purchase by Glen Hill Farm. Trained by Shoemaker’s one-time assistant Gallagher, she was  unplaced in all three of her starts, including one on the turf. Now, in the early stages of her second career, Indy Blaze has finally come good with her first foal, Enterprising, a son of Elusive Quality (himself a top turf miler) trained for Glen Hill by Tom Proctor and ridden, like his granddam, by Gary Stevens.

Indy Blaze is the dam of a 2012 filly by Stormy Atlantic, named Marketplace; an unnamed yearling filly by Henrythenavigator; and she was bred to More Than Ready for her 2014 foal.

Meanwhile, Fire the Groom had her last foal in 2010 and, at the age of 27, is living out her days at Hubbard’s Crystal Springs Farm in New Mexico, where her paddock companion is 28-year-old Misty Moon. Misty Moon is the dam of two champions and Classic winners in Brazil: Virginie (also a Grade 1 winner in the U.S. for Hubbard) and Be Fair, who is the dam of two stakes horses sired by Stravinsky.

On December 30th last year, Hubbard’s longtime manager Tom Goncharoff sent me pictures of Fire the Groom and Misty Moon, along with this note: You can tell we didn’t clean them up -- they hate that! Both old girls live together in a 6 acre paddock -- they’re inseparable and doing very well considering their advanced age.

I’m still recuperating from a busy trip to Europe but thought it beyond time I posted some photos, beginning with these from a February 25th visit to Banstead Manor Stud -- home of some of the best stallions in Europe -- in Newmarket, England.

And Frankel...well, he’s Frankel. Click here for fun Frankel facts and a photo of him as a foal. 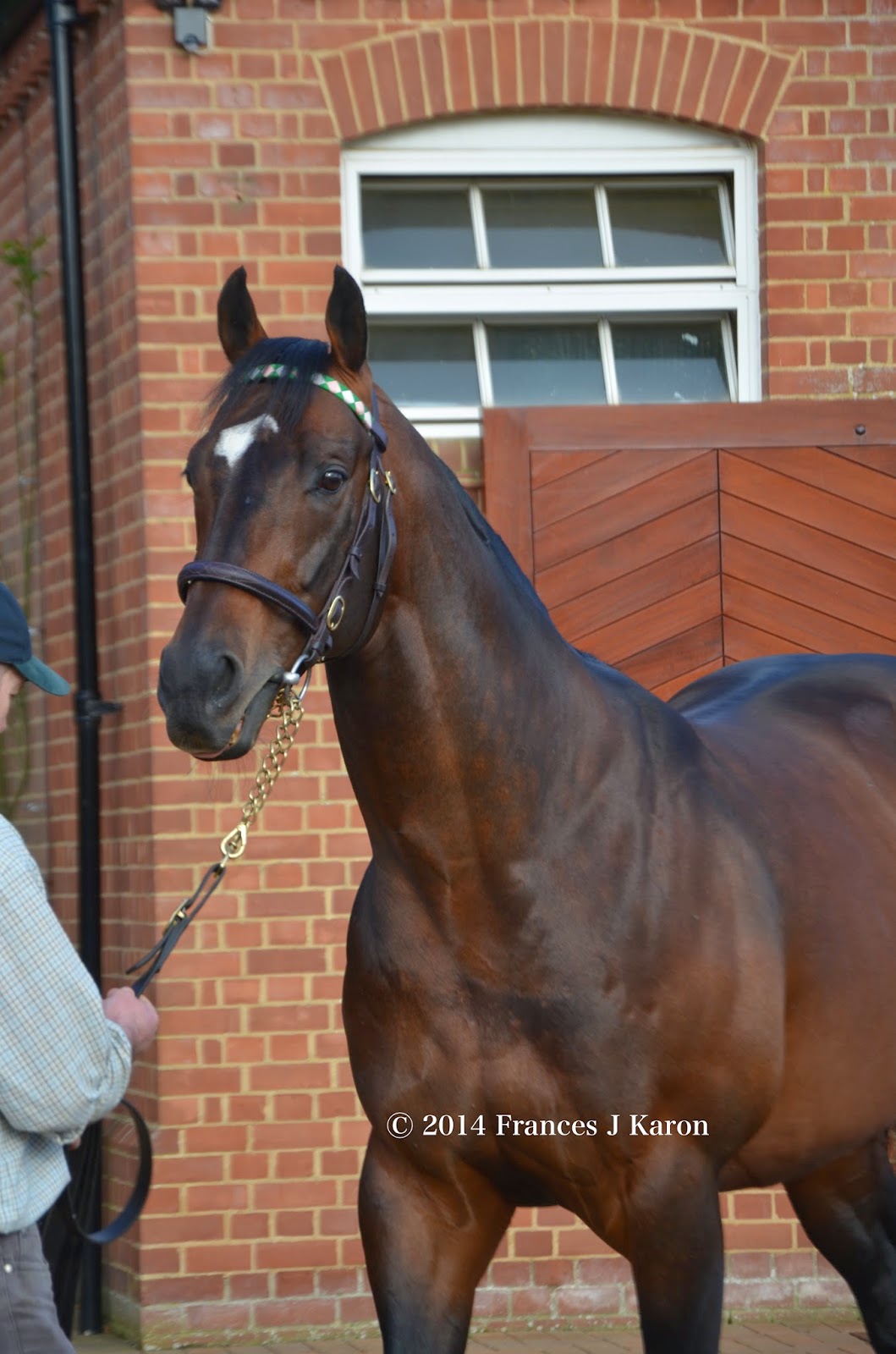 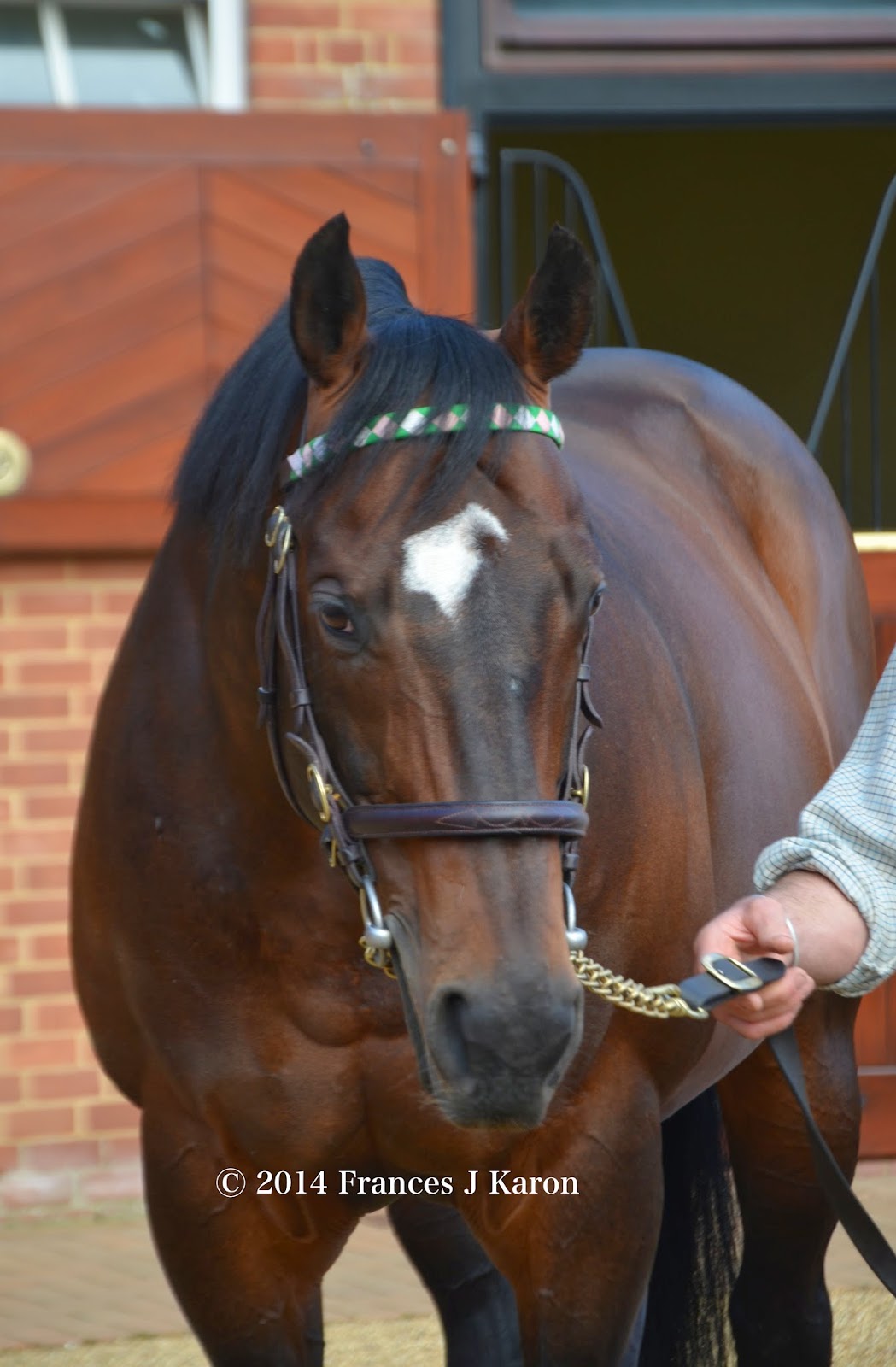 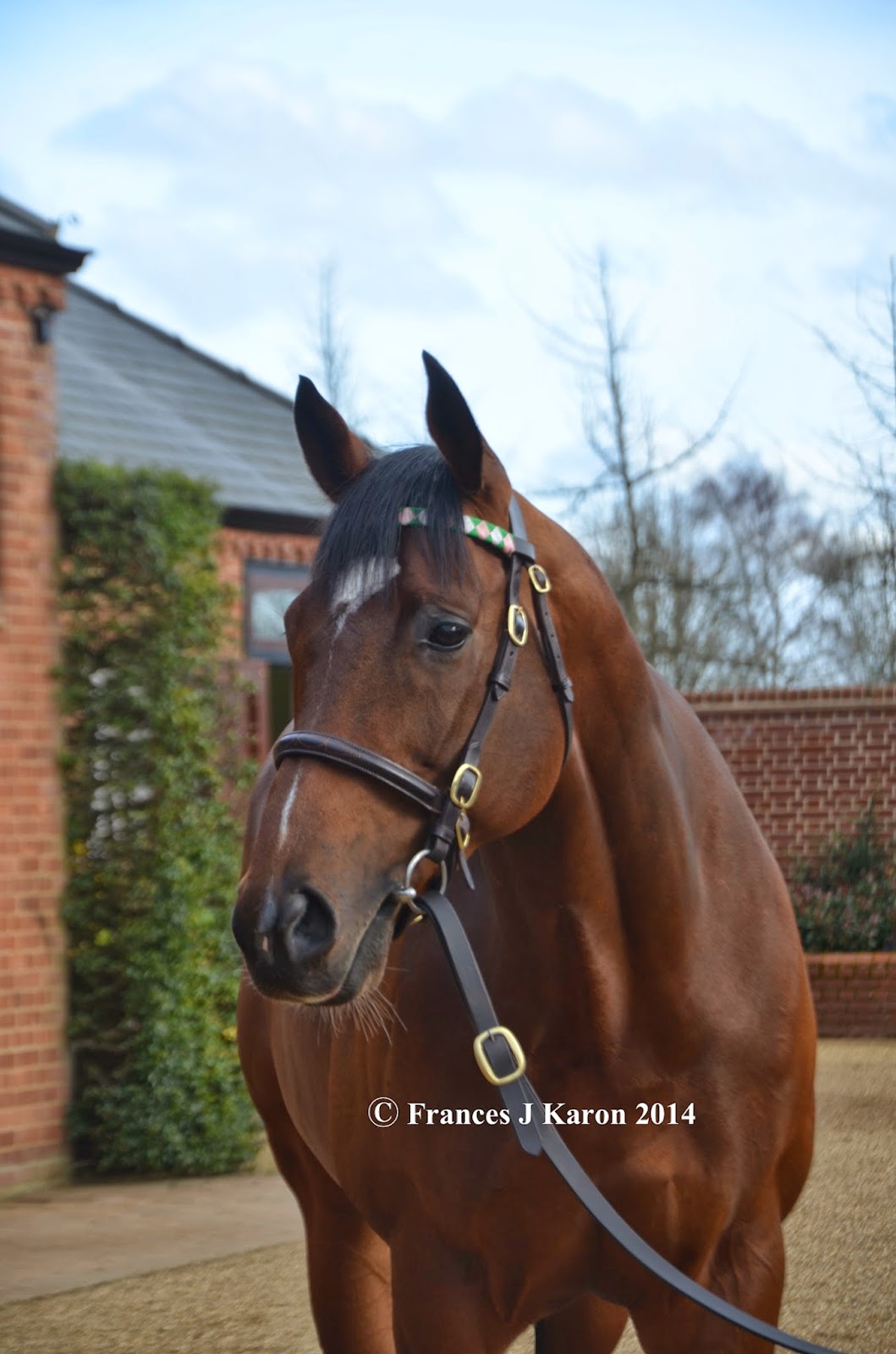 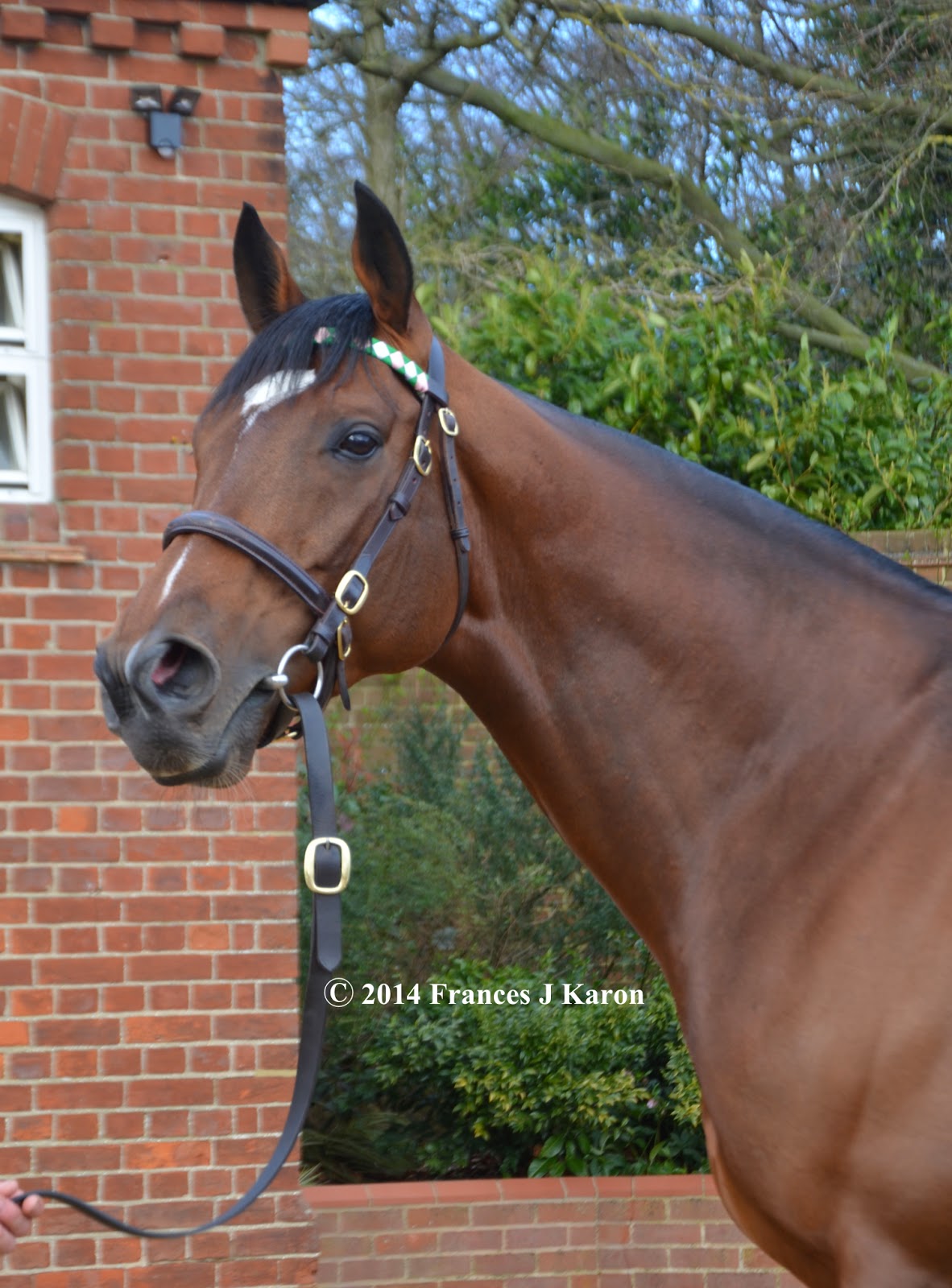 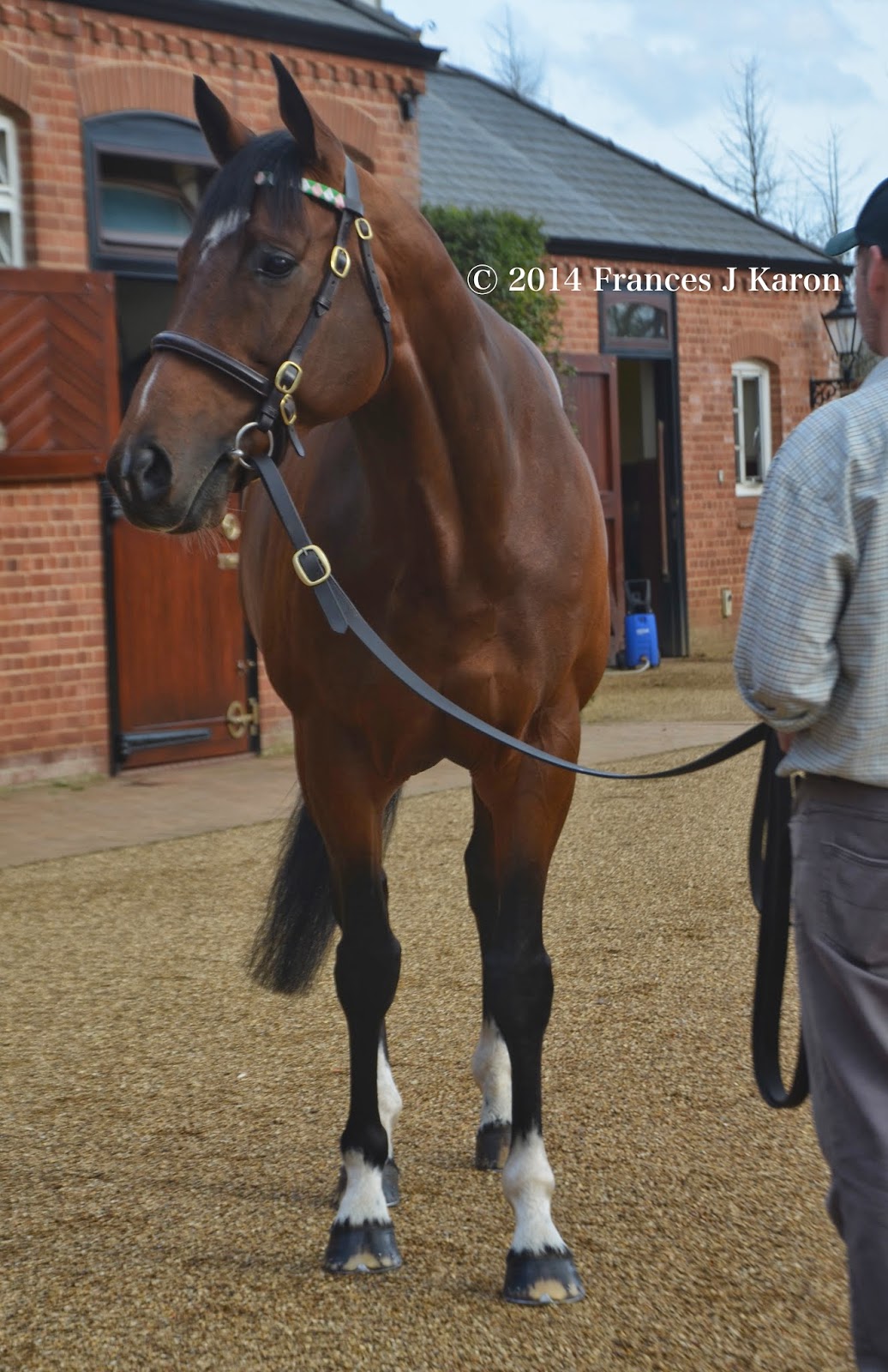 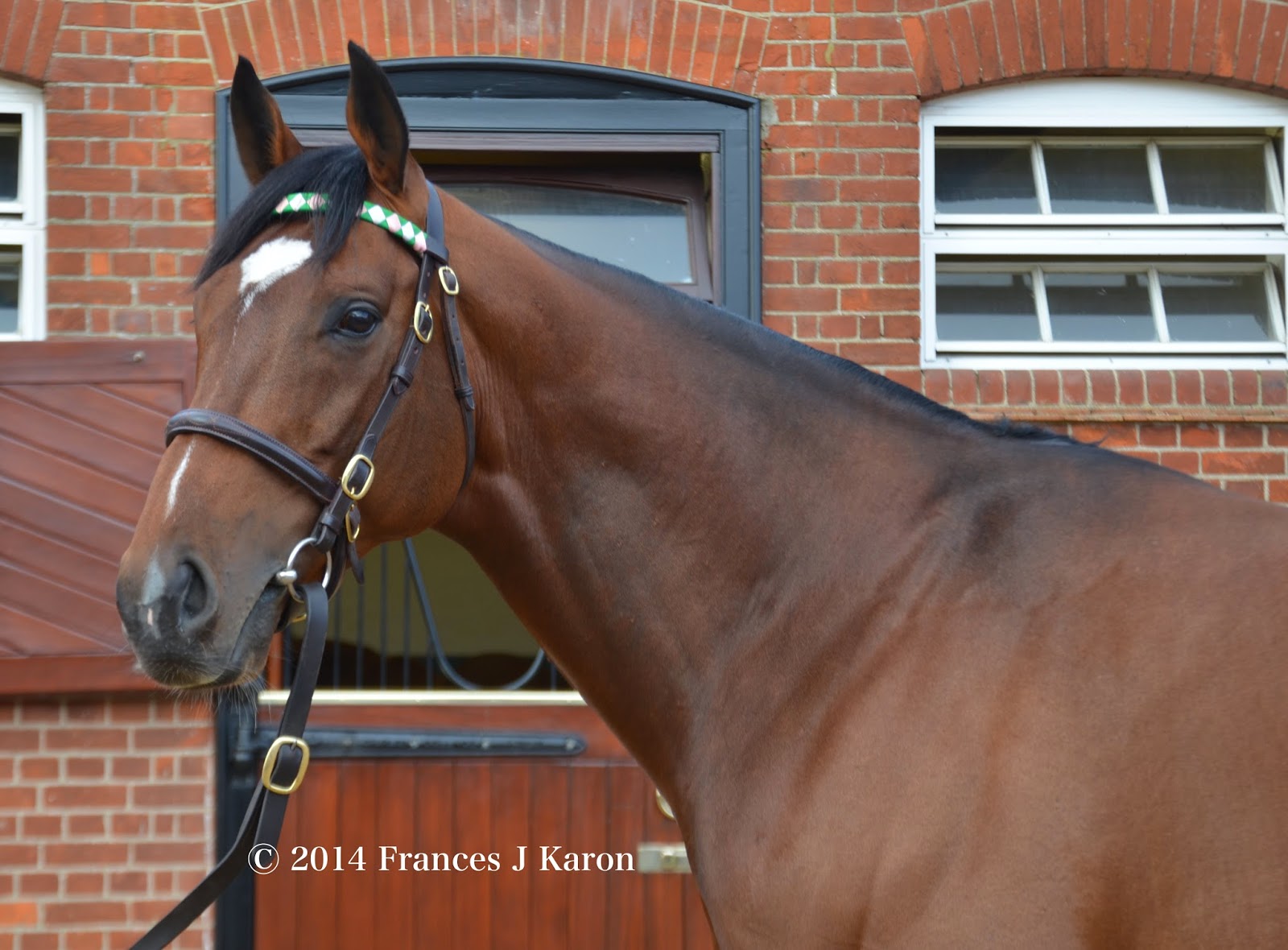