In October of 2007, I met up with Buck Wheeler at Ramsey Farm in Nicholasville, Kentucky, to write an article for North American Trainer on Buck’s method of breaking yearlings. Buck uses his Stableizer -- a string under the horse’s top lip that hooks behind the ears and hits key soothing pressure points -- as a tool for relaxing the young horse, and I watched the entire, rather quick process as a yearling was taught to accept a saddle for the first time.

The colt I observed Buck working on was chosen at random. He was a gray son of Tapit and Pamric, by Woodman, that Kenneth and Sarah Ramsey had purchased for $85,000 from Highclere Sales, agent, at the Fasig-Tipton July yearling sale, where he had been catalogued as Hip 102.

I put my voice recorder in the pocket of Buck’s shirt and stood back to watch, listen, and take photos from the center of the round pen as Buck and the yearling worked together. The ’06 Pamric was a good student, soon accepting Buck as the alpha and willing to do all that was asked of him. I went home, wrote my article, and that was that.

Recently, I was reminded to look for my pictures from this outing when a friend made a reference to Headache, a Grade 2 winner last year for the Ramseys. Because Headache, of course, is Pamric’s 2006 foal -- the very one who was used for my breaking-in demonstration at Ramsey Farm four-and-a-half years ago.

Now a gelding, Headache has raced 28 times, compiling a record of 8-5-5 with earnings of $774,123. His racing career has had its ups and downs -- after three maiden special weights at two and three, he dropped to maiden claimers, winning finally in his fifth lifetime attempt. He stayed at claiming level and was haltered from the Ramseys and trainer Nick Zito for $20,000 in his seventh race, but the Ramseys, with his current trainer Mike Maker, claimed him back, one start and 28 days later, for $25,000.

His progression to Graded stakes quality was not a natural one. He made his stakes debut in July, 2010, winning the [N] (non-black-type) Claiming Crown Jewel Stakes at Canterbury. Headache continued to run against allowance and claiming competition for the next 11 months, winning just once in the timeframe, before his first foray into a black-type stakes race, the Grade 3 Prairie Meadows Cornhusker Handicap. He won, with Grade 1 winner Awesome Gem behind in second.

Headache impressed his team enough in the Cornhusker that he only ever started in Graded stakes races afterwards. He next finished fifth in the Whitney H.-G1, won the Grade 2, $500,000 Hawthorne Gold Cup Handicap, was 12th in the Breeders’ Cup Classic, and ran sixth in the Clark Handicap last November, his most recent start.

Ken Ramsey told Joe DePaolo in his Breeders’s Cup blog that the horse was “a headache when he got to Nick Zito, and that’s why he’s a gelding.” (And, of course, hence the name.) It’s funny, because from what I remember, and sorting through my pictures of the day Headache was broken to saddle -- despite coming from a hot-blooded sire line, he was quite docile. 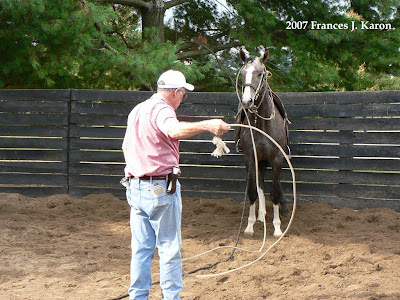 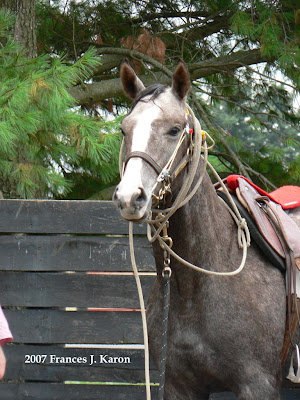