The latest issue of North American Trainer is now available online, with my features on King T. Leatherbury, who will be enshrined in the Hall of Fame in August, and The Tetrarch, one of the most influential pedigree influences of the past 100 years.

Leatherbury, known as "KT" or "Leather" to his friends, has been training since 1959 and has a reputation as a conditioner of low-level claiming horses, but as number four on the list of all-time winning trainers, he's earned his way into the National Museum of Racing and Hall of Fame. The  Hall of Fame nod was a long time in coming and one that Leatherbury, and many others, never thought would happen. If there's one thing I learned from spending a morning with Leatherbury, it is that his induction speech to be very entertaining!

His once-large stable is now down to 14 horses and currently has a big star in nine-year-old gelding Ben's Cat, a multiple Grade 3 winner and earner of over $2.4 million.


The Tetrarch is a name that will be familiar to anyone with even a passing interest in Thoroughbred pedigrees, and after a visit to his stud home and final resting place, Ballylinch Stud in Ireland, I could have written volumes on "The Spotted Wonder."

The section addressing the colt's stamina, which has been long debated since the colt never raced beyond the age of two, didn't make the final cut for space reasons, but I think it's interesting enough to reproduce here. Steve Donoghue was The Tetrarch's jockey and regular work rider:

The Tetrarch and Stamina

The Tetrarch sired three St Leger winners, one Irish Oaks winner, and other distance horses. Royal Highness broke his maiden over 11 furlongs and won up to 12 furlongs on the flat; he was also a winning hurdler. Puttenden’s victory in the Ascot Gold Vase was over two miles, and his brother Old Rowley won the 11-furlong Ellesmere Stakes.

On this basis, it could be argued that The Tetrarch would have lasted the 12 furlongs of the Derby, but it could also be argued that the damsires of these progeny were stamina influences: Polymelus (broodmare sire of Polemarch) and St Frusquin (Salmon-Trout) were winners of the 12-furlong Prince of Wales’s Stakes; Perigord (Snow Maiden and Caligula) was by St Simon, who had won both the Ascot Gold and Goodwood Cups over 20 furlongs; Pietermaritzburg (Royal Highness) won the 14-furlong Jockey Club Stakes; and Ayrslave (Puttenden and Old Rowley) was by Derby winner Ayrshire.

For what it’s worth, Steve Donoghue had this to say: “…very few people know the truth, that in my humble opinion The Tetrarch, had he kept sound, would never have won the Derby…He would not have stayed the course…He did not like being held back or waited with, and he only gave of his best when allowed to go straight out in front of his field, lengths in front.”

Also in this issue, Frank Mitchell takes a look at the Consignors and Commercial Breeders Association, Denise Steffanus describes her day with the racing stewards at Churchill Downs, and Sid Fernando has his regular column on the last page of the magazine. 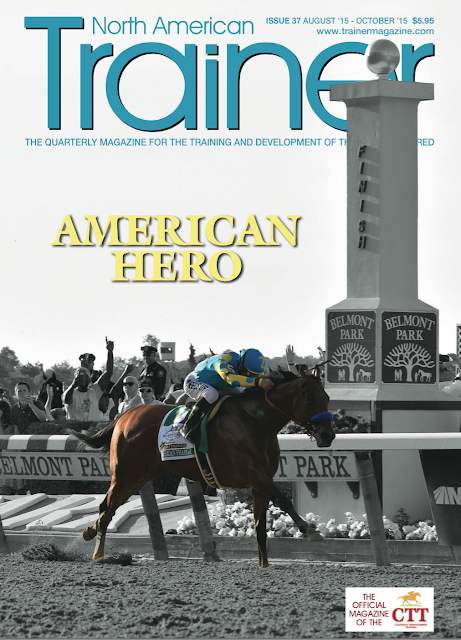