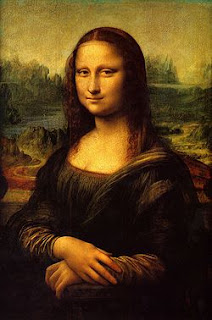 If you’ve ever wondered what da Vinci’s Mona Lisa is smiling about, here’s a smaller-scale mystery:
Nashua’s handler Clem Brooks was as familiar to Nashua’s fans as Will Harbut was to Man o’ War’s. When Nashua died in 1982, Spendthrift Farm’s Leslie Combs II commissioned a half-scale bronze sculpture from artist Liza Todd, Dame Elizabeth Taylor’s daughter. She beautifully captured Nashua and Clem walking towards the breeding shed, the stallion relaxed with his head gently turned towards his groom. 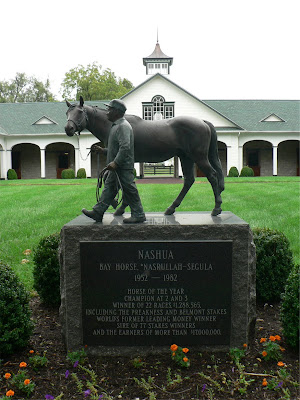 Clem was, by all accounts, quite the character, and you’ll notice a trace of a smirk on his face, similar to Mona Lisa’s smile: 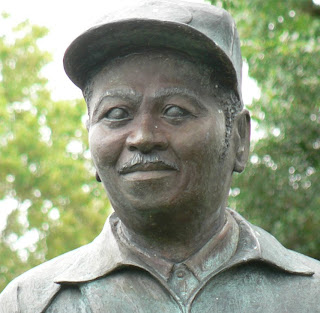 Clem was always willing to share souvenirs from Nashua, and there was no shortage of admirers for the son of *Nasrullah and Segula. Champion 2-year-old in 1954, Belair Stud’s Nashua trained on at three to win the Preakness and Belmont. He defeated Swaps, to whom he’d been second in the Kentucky Derby, in a match race to settle 1955 Horse of the Year and champion 3-year-old male honors. Nashua was the second horse in history, after Citation, to earn in excess of $1-million. His record after three seasons of racing was 30-22-4-1, and he was the first horse syndicated for over a million – $1,251,200, to be exact. All of this ensured a steady stream of visitors to Spendthrift.
After Clem would show the bay stallion to fans, he’d pull a shoe out of his pocket and watch their eyes get big when he told them it was off Nashua. Then he’d offer to sell them the shoe, and who could resist that? I can only imagine how excited people were as they left Spendthrift taking home a shoe that was off the great Nashua.
What they didn’t know was that whenever the blacksmith came to trim the stallions, Clem would rifle through the back of the truck looking for old, worn shoes that came from who knows where. It was these that he presented and sold to visitors as being “off Nashua.” It became a lucrative little side business for the groom.
Clem was a clever fellow, always very careful to say that they were off Nashua. And as he pointed out, he never did say the shoes had ever been on Nashua, and it was quite true that they were off him, as Nashua was not wearing them!!
Here is a view of the statue and another of Clem from a different angle: 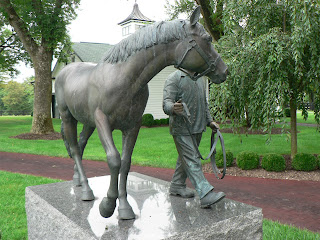 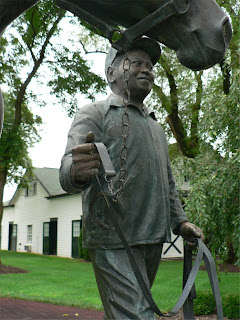 And now, take a close look at Clem’s right pocket and see if you can guess why he’s smiling: 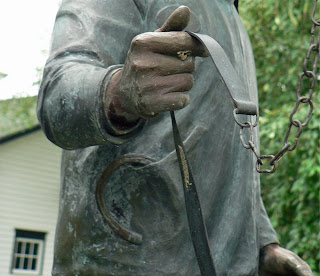 (click on photos to see them full-size)
Posted by Frances J. Karon at 2:47 PM